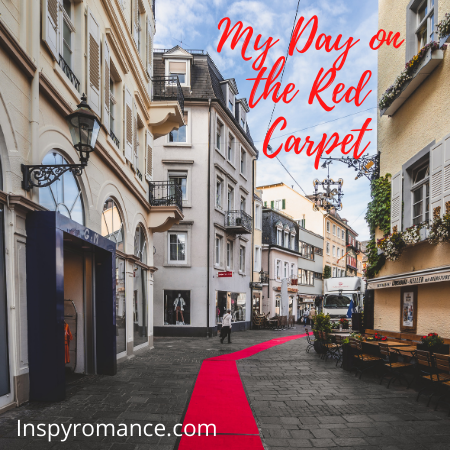 In my now twenty-plus year career as a published author, I’ve had the opportunity to do many fun things.  I’ve been interviewed on the radio.  I’ve signed copies of my books for long lines of people.  I’ve appeared in front of readers and read pages from my books.  I’ve gotten to see my books displayed in a bookstore window.

And I’ve gotten to walk the red carpet.

Well, it wasn’t red.  And it wasn’t in Hollywood.  But still … it was exciting!  Let me tell you the story. 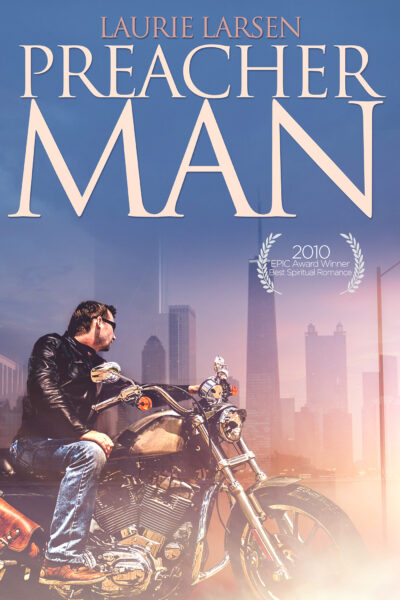 The first inspy romance book I ever wrote was Preacher Man.  It is the story of Regan, a divorced woman trying to raise her teenaged son in the big city, without a faith in God.  Her extrovert friend Liz twists her arm into participating in a charity singles auction.  Sweating it out on the big stage with bright lights because no one was bidding on her, she’s relieved when one bid finally comes through.  One.  Probably someone wanting to put her out of her misery.  Turns out it was Josh, and he makes his living as, well, a preacher man.  Talk about an odd couple.  He never intended to fall in love with her.  But God had a different idea.

Preacher Man enjoyed a lot of support from its publisher and editor, and they entered it in a contest called the EPIC award for excellence in e-books.  They let me know they’d entered it, but I didn’t really think much of it until I got an email from the contest telling me that my book was a finalist in the Spiritual Romance category.  Cool!  And they invited me to the awards ceremony in New Orleans!

The awards ceremony was the closing event of a four-day writers conference.  I had attended several conferences before, and I always learned something.  I was interested in going.  The fact that it was in New Orleans was icing on the cake.  I’d never been there!  And seriously, the draw of attending the awards ceremony was appealing.  What if I won and I wasn’t there to accept it?  (“In Laurie’s absence, we accept this award in her honor…“)  Nuh uh.  I was going.

I went ahead and enrolled in the conference, booked my flight and my hotel.  I reviewed the workshops being offered, and marked in times when I could go sightseeing.  I wanted to hit the French Quarter with its old buildings with French influences, like

the wrought iron balconies, red-tiled roofs and picturesque courtyards.  I wanted to browse through old bookstores and antique shops and soak in the spirit of this historic city.  I wanted to find the renowned open air Café Du Monde and experience the magic of a delicious beignet and café au lait.  I wanted to take a guided tour of the graveyards and the Garden District.

As the event approached, I talked to my husband about flying down on Saturday to attend the awards ceremony with me.  Whether I won or not, I didn’t want to experience it alone.  I either wanted to celebrate a victory, or shake off defeat with him.  I was shocked when he declined.  He explained that just as the President and Vice President don’t travel on the same plane, he and I shouldn’t either.  His rationale was that if the plane went down, our two boys would be orphans.

Then I thought of my parents.  They were spending the winter two hundred miles away from New Orleans and maybe they wouldn’t mind making the drive?  Besides, my mom had often dubbed herself “my greatest fan” and she wouldn’t want to pass up this opportunity!  They agreed to drive over on that Saturday.

My departure date was arriving but alas, I developed a sinus infection.  I went to the doctor about a week out and was prescribed an antibiotic.  Unfortunately, I didn’t improve.  My head was heavy and painful and my nose was running like a faucet.  I had no energy.  I returned to the doctor and explained I had a pending flight and a conference and I needed to be better.  Two days before my flight she prescribed me an extra-strong med and I prayed like crazy.  Heal me, Father! Hallelujah, by the morning of my flight, I felt better.

I get to New Orleans, check into my beautiful hotel on Canal Street and sink into my treasured getaway.  The sun was shining, the food was unusual and delicious, and the people at the conference were happy and supportive.  I had a wonderful time.  I got to do all the exploration of the city that I wanted, and I attended a number of informative workshops.  But the main event quickly arrived:  the awards ceremony.

My parents arrived late in the afternoon and I joyfully welcomed them.  They changed into dressy clothes in my hotel room, and then I spent some time getting dressed.  I’d needed a formal dress for the ceremony but instead of buying one, I borrowed one from my niece.  I believe she’d worn it to a dance.  I put it on, did my hair and makeup.  A bout of nerves hit me.  Although I’d had a wonderful time, a contest win would be the icing on the cake.  I’d jotted down a short acceptance speech, just in case, and I’d repeated it to myself so many times that I’d memorized it.  Would I get a chance to recite it or would I be listening to someone else delivering theirs?

We went to the banquet hall and sat at a table near the stage.  The program was sitting in front of me.  Paging through it, I realized that like the Oscars, there were lots and lots of awards tonight.  An award for every conceivable genre.  Flipping through the pages, okay, there it was: Spiritual Romance.  There were three of us finalists, and it was one of the earlier awards being announced.  Good.  I’d get it over with early on, either with a win or a loss, and enjoy the rest of the categories, cheering on the folks I’d met and gotten to know over the course of the conference.

I remember the meal was good, although I wasn’t hungry, and a finalist in another category joined us at our table.  We chatted about the conference and the fun we’d had in New Orleans.  Then, the awards ceremony began.  I turned pages in the program as each award was handed out.  Before I knew it, it was my category.  My mom leaned over and gripped my hand, a smile on her face.  The three book titles and author names were announced, then a moment of silence while the announcer opened an envelope (yes, just like the Oscars!) and then… 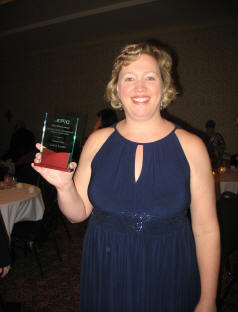 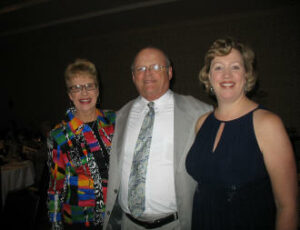 I won!  I won!  I remember my dad making a pleased “ah ha!” sound and my mom smiling so happily at me.  I stood and walked carefully to the stage, my head spinning.  The last thing I needed now was to trip!  But no, I didn’t trip. I looked out over the faces, smiled, and then recited my oft-repeated acceptance speech.  Someone handed me the trophy and I lifted it over my head and returned to my seat amidst applause.

The ceremony continued on, but I stared at my trophy and my certificate, my hands shaking, my heart racing, my mother’s smile beaming my way.  I’d done it.  I’d written a spiritual romance, my first one, and this was my reward.  God was telling me … write more of these.  You have stories to tell, and we can partner to tell meaningful stories about love and faith.

I have won several more writing awards since this big day, but none involved a red carpet moment like this one.  It’s an experience I tuck away fondly in my memory bank of this amazing journey of being a published author that God has led me on.  I thank Him for bringing me here and together, we’ll continue to put stories out there.

Discussion:  Do you have a red carpet story?  Have you ever accepted an award?  Given an acceptance speech?  Have you ever been to New Orleans?  What were your favorite parts of that historic city?

I’ll choose one random commenter to receive a copy of Preacher Man, any format you want (ebook or paperback).  This includes international guests.  I’ll pick the winner on Tues May 25.