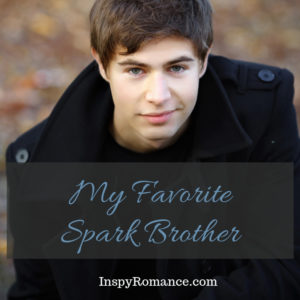 Did you know that authors have a whole gaggle of kids? Let me explain. In my real life, I am a mama of two—a teenage son and a pre-teen daughter—whom I refer to as my munchkins. In my author life, I’m also a mom to all the characters I’ve created, including the five guys in my Spark Brothers series.

While I don’t have favorites among my real kids (they’re so different and unique in their own ways!), I must confess that brother #5, Evan, has grown to become my favorite Spark brother. (It’s okay, the other four know I love them, too! Lol) Why is Evan my favorite? Simply because he’s less than perfect.

As the youngest brother, Evan’s lived in his brothers’ shadows and has worked hard to make a name for himself. He’s passionate about his work as an actor, about Emma, the woman he loves, and about his faith in God. This doesn’t mean he always makes the best decisions or never gets swayed by his insecurities. Because he does get it wrong. He gets beaten down emotionally and loses hope. Yet, he also gets back up and on the right path again with the help of his family.

What I like most about Evan is his vulnerability. He’s relatable because he has struggles like the rest of us. His story serves as a reminder for me that God will always meet us in our weakest and most desperate state. In fact, it’s our brokenness that makes us open to receiving the Lord’s help.

I hope you’ll check out Evan’s book, An Extra Spark, which is only 99¢ for a limited time. And while you’re at it, please show the other Spark brothers some love, too. ;) 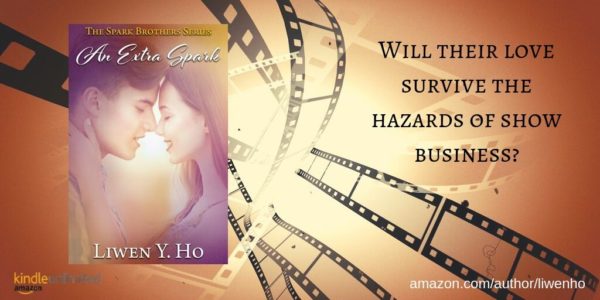 He’s an actor pressured to risk everything for his job. She’s an actress struggling to fit into the Hollywood scene. Little do they know how much they will be tested when they are forced to keep their love a secret.

Evan Spark grew up in the shadow of four older brothers, but he’s finally found his own place in the limelight on primetime TV. His job, with the best fans and a chance to work with the love of his life, is everything he ever wanted … except for the flirty costar who’s set her eyes—and lips!—on him.

The last thing shy and unassuming Emma Dearan expects is to land a role as an extra on Edenvale and to win the heart of its leading man. With the reassurance of a “no kissing” clause in her contract, she’s finally feeling at home in the spotlight, on screen and off—until the executive producer’s daughter forces her to choose between a promotion or her boyfriend.

The longer they keep their relationship under wraps, the harder it is to know what’s real. As the paparazzi zero in on their secrets, they must learn to discern the truth from the lies. Will the hazards of show business spark new insecurities or strengthen their bond of trust?

Which fictional character would you love to have as a sibling, and why? Let me know in the comments below. I look forward to reading your answers and learning about some new books!