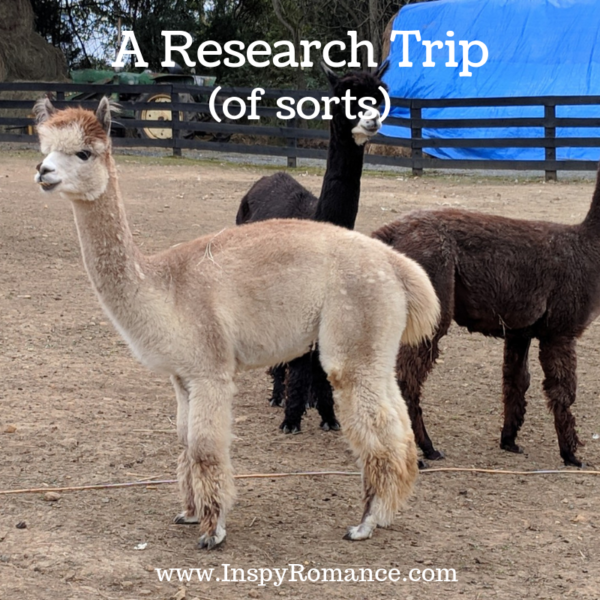 If you’ve been around InspyRomance a while (long enough to experience a Sunday Edition or two when I’ve been on), you might have realized that I enjoy doing a few crafty type things. I taught myself to crochet when my husband and I were first married (mostly because we barely had two nickels to rub together and we had friends who were pregnant and I had no idea how we were going to afford a baby gift, so I figured if I could make them a baby blanket it would really only cost me some time.) My mom taught me to knit one winter break in college when I wanted to make a more meaningful gift for my boyfriend (now husband).

In September, I blogged about my husband’s (and my – but he was there first) love of llamas and alpacas and how I finally have a way to incorporate into a story world for him.

And in October, I found a way for my love of crochet and knitting to combine with hubby’s llamas and alpacas AND my need for information for my upcoming story. See, our friends all pretty much know about my crafts and hubby’s llama thing, so periodically, we’ll get a text or an email with an interesting link. The most recent was a friend texting me a link to a nearby farm that was offering a drop spindle spinning class. What sort of farm? An alpaca farm. (They do also have sheep.) I’m pretty sure that even non-writers who enjoy fiber arts would jump at the chance to learn how yard is made and give it a go themselves. I don’t usually need to do a ton of research for my books, so when you throw in how cool that will be for my future book? I was there.

The alpacas above are some of this local herd that I got to meet during my Saturday jaunt down to the farm. I was greeted at the car door by twin boys, each carrying their pet chicken. I’m going to have to find a way to work those boys into a story, because they were the cutest ever. Also, I’d never held a chicken. Now I have. (Those chickens were the calmest birds on the planet. The boys would put their chicken on their shoulder and then ride bikes and scooters with the chicken perched serenely. It was so fun to watch.) 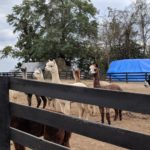 We started our class with an introduction to the alpaca herd. Then she got one and brought it outside so we could pet it and get a little more up close. The alpaca in question was the white one you see on the title image. Her name is Athena, and she spits. A lot. Big, globby snotty spits full of half-chewed alfalfa. She didn’t get me, but not all of our class of six was able to escape her benediction. 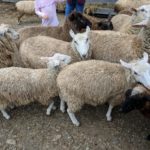 We learned all sorts of fantastic information on how to raise alpacas for their fiber. It was fascinating. From there, we moved on to her herd of sheep. She has I think forty sheep in two different varieties. All their animals are fiber animals, meaning they’re raised for the wool they produce each year. It was fascinating to see the difference in the coats on the animals and then see and feel the different type of yarn those coats produce after processing. 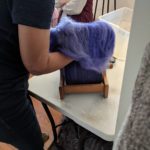 Finally, we moved inside and learned about what happens to the wool after shearing. It is a process! After washing, the fleece has to be carded to remove all the burrs and bit of food that get stuck in an animals coat over a year. Different animal coats work better on different sorts of carding equipment. On the right you see a dyed alpaca fleece coming off a drum carder. She also let us use hand carders to see the difference. The fiber length plays into what works better. Either way, it’s a lot of work. Once carded, you 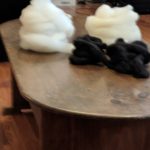 end up with roving (basically the fleece in a nice, organized form free of burrs.) It’s the roving that gets spun into yarn. (That’s roving over there on the left.)

The drop spindle is a simple piece of equipment. Using it…is far from simple. It seems like it should be relatively easy, but having tried it, I can assure you that there is a lot of time and patience put into learning to spin this way. (At the farm, she usually uses her spinning wheels, it’s much faster and probably easier on your back. But also less portable.) 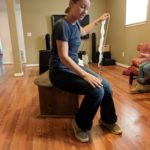 Basically, you get some twist on your spindle, and then hold the spindle between your knees and let the twist travel up the small strand of roving you’ve separated from the larger bundle. Repeat until you have a ball of yarn. (I laugh hilariously as I type that. Y’all, it was so hard. My attempt looks almost like it just came off the alpaca – it sure doesn’t look like yarn. And my back ached for the next twelve hours from the various arm positions needed. It’s work.)

That said? It was so much fun. I’m looking forward to getting to incorporate some of my new knowledge into a Hope Ranch book in 2019.

And speaking of my Sunday Edition craft updates – here are my two projects as of today. The shawl is finished and the temperature blanket is nearly complete – just a few more weeks left in the year! 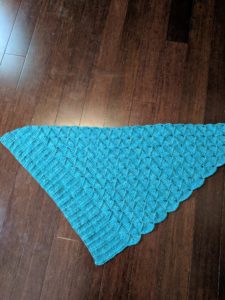 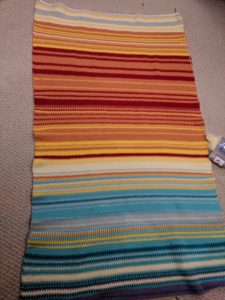 Are you crafty at all? What do you like to make? If you’re not crafty, is there something you’d like to learn?