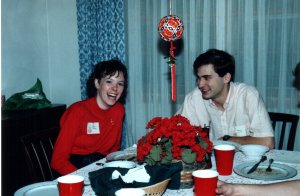 Wow, we were young. And skinny. This is at our rehearsal dinner.

Two days from now is my 24th wedding anniversary, so I thought I’d post a little about our real life romance.

We met a few days after I started my first year of college. I believe we started school the last week of  August. Our first date was September 9, 1988. :)

We spent every weekend, and many hours during the week together from that point on. Well, until January. He co-op’ed in D.C. A four hour drive from home. No e-mail. No cell phones — none that you’d want to carry anyway. So we talked on the phone when we could. And we wrote letters.

He came home for my birthday in February. We had an ice storm.

I went to visit him when the weather was better. We ate Maryland crab for dinner. YUM!

At some point during our time together, we fell in love. For me, it was not love-at-first-sight. I thought he was arrogant and, well, a few other choice words. I was a Christian with little experience how to actually BE Christ-like. :)

So, a year passes (1990 now). My so non-romantic boyfriend asks me to marry him, in his parents’ den (at least they weren’t there), just before we left for someone else’s wedding. Why he wanted to marry me is still a mystery. I was a messed up young lady. I had a LOT of issues (most of which Christ has worked out of me).

Fast forward a few more months. Oh wait, back up a little. After my first year of college, my funding dried up (I was poor), and I had to drop out. Truly, it was a God-thing. I made a decision to go to a one-year trade school to become a secretary. I graduated in July and immediately found work.

We decided on a December wedding. We picked out all the typical wedding things, but I didn’t have much money to pay for a wedding. We had friends and family help provide food for the reception. The church would be decorated for Christmas, lessening the need for flowers. I borrowed (yes, borrowed) a wedding dress. I ordered the cake from a grocery store. I think it cost $99. The most expensive thing at our wedding.

A few days before the wedding, my future husband got to meet my dad, who lived in West Virginia. (Today would have been my dad’s 80th birthday. Happy birthday, Dad.)

The day for the big event arrived. I went to a hairdresser early that morning. I just wanted a pretty do. I wound up getting a perm. (DON’T EVER DO THAT BEFORE A BIG EVENT.) Wow, my hair turned out curly. I think I was almost in tears.

I lived about 30 minutes from the church, so after my hair fiasco, I traveled over to make sure things were going well. I got the tables set up in the fellowship hall, and made sure the unity candles and stuff were ready in the sanctuary. I had help, but for the life of me, I don’t remember everyone who was there. 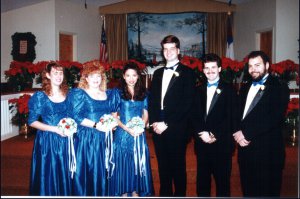 Around one, I started to worry (the wedding was at two). My maid of honor hadn’t shown up yet. I put it out of my mind and went to check on things one last time. I wound up having to run because my groom had arrived. At least he was punctual. :)

My maid of honor finally arrived a few minutes later, and we started getting ready.

I was crazy nervous. 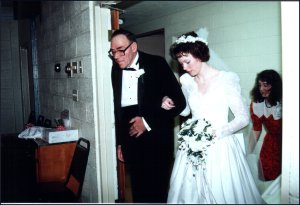 I just hate being late. My mom used to say that if she was five minutes early, she was late. I feel about the same.

I was also anxious. I wanted it done. My nerves couldn’t handle anymore.

Fifteen minutes later, I was Mrs. Richard Solomon, Jr. Yep, it was quick.

Two things happened during that fifteen minutes that you should know about. My maid of honor dropped the ring. It rolled down the steps. She had to go down to retrieve it. And while I didn’t realize it at the time, I rocked back and forth during t 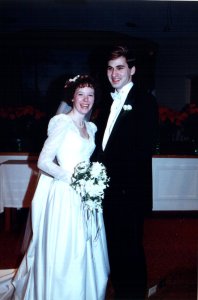 he whole ceremony. I have evidence via video.

So there’s my real life romance. Not very romantic, but still just as real.

Twenty-four exciting, wonderful years with the love of my life. And I am so grateful to God for such a caring, loving, if unromantic, man.

I pray each of you, InpsyRomance readers and writers, have a blessed Christmas. May Christ be the center of your celebration, not only on the 25th of December, but all year round.