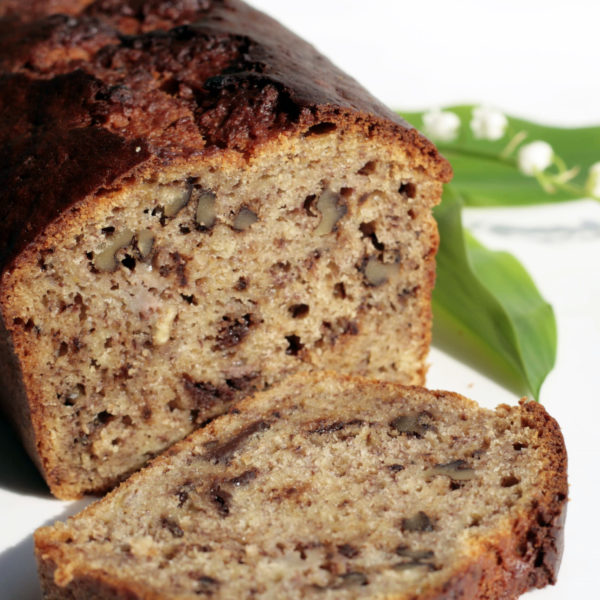 Today is National Banana Bread Day in the USA, but you can celebrate wherever you are. I love to find out about quirky holidays, especially when they involve food. Bananas were first introduced in the United States in the 1870’s, but a good number of years would pass before they were included in desserts. Banana bread became popular as a way to use overripe bananas. Here’s the recipe I got from my mother. It’s called Best-Ever Banana Bread. I agree with the assessment.

Do you have a favorite recipe that uses bananas? 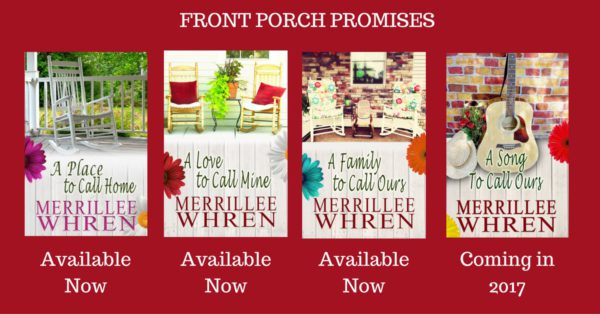 I’m giving away an e-book copy of the second book in my Front Porch Promises series, A LOVE TO CALL MINE. Here’s a little excerpt about Max, the hero of the story and his lack of interest in cooking.

While he was trying to sort out the mess of his life, Heather parked her car in front of a three-story clapboard house with a porch that wrapped around one side. The second and third stories had balconies that looked out on the quiet tree-lined street.

Heather and his mom were out of the car and on the sidewalk before Max could get out of the backseat. Was the cancer making him slow, or was he reluctant to check out what would surely be his new residence? His mom was already exclaiming over the place without even stepping inside.

“The houses in this block are all what they call triple-deckers. They were built around the turn of the twentieth century, but most of them have been updated.” Heather pointed across the street. “I live in the green one just down the block.”

Max glanced toward her residence. Was she trying to show off her knowledge or just being informative? Would living this close to her always remind him of Brittany? Here in this new place he needed Heather’s friendship, but that fact annoyed him. He was afraid her presence in his life would bring to mind his failures. It was hard enough to see her on his treatment days, and having her for a neighbor might be more than he could handle.

Was he losing his mind? Why couldn’t he stop thinking about Heather?

As Heather strolled up the front walk, Jeremy and Luke walked out onto the porch. She waved. “We’re ready for the grand tour.”

Jeremy chuckled. “I don’t know how grand it will be, but we’ll give you a tour. We even threw out the old pizza boxes before you got here.”

Max smiled as he stood beside his mom on the porch. Maybe this wouldn’t be so bad after all. He felt right at home with pizza boxes. He suddenly realized why this whole scenario bothered him. Other than his freshman year in college, he hadn’t had roommates. He’d lived by himself. Even growing up, he’d been an only child. His half brother and half sister were born after he’d gone away to college. Sharing a space with other people was something he would have to get used to doing again.

Luke opened the door and stood aside as he waved a hand toward the entrance hall. “Max and Mrs. Reynolds, after you.”

Max let his mom go first. On the right was a staircase that led to the apartments on the second and third floors. On the left was the door leading into the first-floor apartment—possibly his new home. Luke led the way, and Max stepped into the hallway just inside the door. He caught his first glimpse of the living room straight ahead. Dark wood floors and woodwork filled his vision. A comfortable-looking sectional curved along two walls, and a big-screen TV sat on a stand on the opposite wall.

“Oh, this is lovely.” Beth slipped her arm through Max’s as she looked up at him. “Don’t you think so?”

“It’s nicer than my place,” Heather said. “This apartment has been completely updated.”

Jeremy moved down the hall to his left, then looked back at Max. “This is the room you’d have if you decide to move in here.”

“Max, this is great.” Beth walked toward the window, her steps echoing in the empty room. She looked out before turning back to him. “You have a view of the front yard.”

He nodded, not sure he shared his mom’s enthusiasm for the place. It was appealing. So what made him hesitate? Heather?

“You have to see the rest of the place. It has a fantastic kitchen. It’s too bad it’s wasted on guys who order pizza too many times a week.” Heather chuckled.

Pizza sounded fine to Max. He wasn’t much for cooking. Did they each cook for themselves? He would have to learn the logistics of sharing this space. That’s why it had always been easier not to have roommates. He’d been responsible for everything. While his thoughts roiled, Max followed the group down the hall until they came to the kitchen. Although it wasn’t large, it had the updated appliances and a solid-surface counter. Someone had put a lot of money into this rental property. Maybe the rent was going to be more than he could afford even if it was split three ways.

“This is a wonderful kitchen.” Gesturing around the room, Beth looked at Luke and Jeremy. “With this kitchen, none of you cook?”

“Peter was the one who cooked when he had time.” Jeremy glanced at Heather with a wink. “We invite Heather over from time to time so she can show us her culinary skills in our fabulous kitchen.”

“With Heather around to cook, maybe you won’t starve.” Beth eyed Max.

“I hardly think Heather wants to cook for me.” Max tried to smile as he glanced Heather’s way. She showed no reaction to his comment. His mom, on the other hand, was probably remembering the pizza boxes she’d seen stashed in the trash at his apartment.

Beth grimaced. “I didn’t mean that she’d be cooking for you. I was just thinking that at least once a week you’d have something good to eat.”

“Are you saying I’m a terrible cook?” Max put an arm around his mother’s shoulders as he looked down on her.

“I’m not saying you’re a bad cook, but I know you don’t take the time to do it. That’s all.” His mom extracted herself from his embrace as she glanced between Heather and him. “It’s nice that you’ve had a chance to reconnect with a friend from Montana. So you should take every opportunity to get together.”

Great. His mom was pushing Heather on him. Not only did she live across the street, but they invited her over on a regular basis. Was God trying to send him some kind of message? First the cancer. Now Heather at every turn. Clay had always told Max that God’s plans weren’t always our plans. God’s plans were best. Max had tried to keep that in mind, but the last couple of years he’d struggled with that idea.

After they’d finished looking at the rest of the apartment, and Jeremy and Luke gave Max the details about rent and utilities, he could come up with no argument against moving here except one. He had a lease to fulfill.

Max shook hands with Jeremy and Luke. “Thanks, guys, for the tour. I’ll have to see what I can do about my lease. Then I’ll let you know as soon as possible whether I can move in. In the meantime, if you find someone else, don’t worry about me.”

“I don’t see any problem with waiting for your answer. We haven’t had any responses to our ad for a roommate, so I’m sure we’re good till you make your decision.” Jeremy nodded.

“We’ll deal with Max’s lease even if I have to pay it off myself.” Beth patted Max’s arm.

Max resisted the urge to roll his eyes. He wouldn’t argue with his mother in front of these other people.

Heather stepped forward. “I think the social worker assigned to Max’s case can help with that situation. I’ll talk to her tomorrow.”

“Thanks, Heather. I’m grateful for your help.” Beth surveyed the group. “Let me take you all to lunch.”

“Thanks, Mrs. Reynolds, but Luke and I have our regular Sunday lunch dates.” Jeremy glanced at his phone. “I don’t mean to rush off, but we’re going to be late if we don’t hurry.”

“Don’t let us keep you. Thanks for showing us the apartment. I appreciate everything you’re doing for Max. It puts my mind at ease to know he won’t be alone.”

“We’ll keep him in line.” Luke smiled as he led the way to the door.

“Thanks.” Beth smiled in return.

Even though his mother had smiled, Max didn’t miss the misty-eyed expression behind her smile. And if Jeremy and Luke had regular Sunday dates, maybe he’d imagined Jeremy’s interest in Heather. Max didn’t know why he was concerned about it anyway.

As they walked to the car, Beth turned to Heather. “At least let us take you to lunch.”

Wonderful. Just when he thought he would have some time to himself. More time with Heather isn’t what he needed.