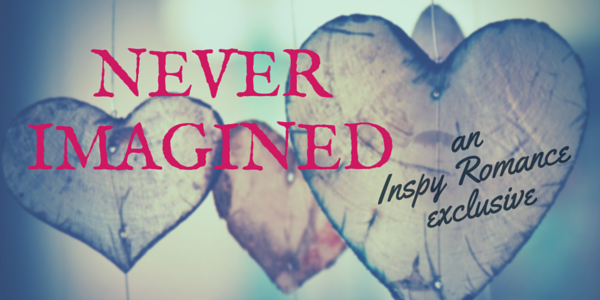 Hey all!  I’m back with the second installment of “Never Imagined.”  If you’d like to read the first part of the story before you dig in, you can do that here.

And remember – up through October 10th, all blog comments enter you in our 2015 Fall Giveaway, which has lots of delicious goodies from chocolate to books to gift cards!  Every blog comment equals one entry, so be sure to come back and comment often!

Mrs. Langley was clutching a book when Pamela stepped into the woman’s room to go through her beginning-of-shift routine. She’d decided to evaluate the stronger patient first and give herself an opportunity to get her composure back in place before facing Mr. Alvarez.

The middle-aged woman rested the object of conversation in her lap. “A modern-day spy novel. Espionage, assassins, government conspiracies, and only one sexy man who can save the world from certain destruction.”

“And does this handsome hero come with a female sidekick?” 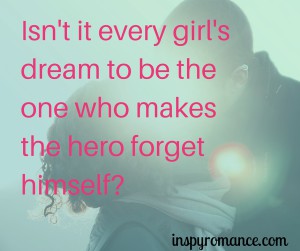 “Pfft.” A derisive roll of the eyes accompanied the sound. “What good would that do? Relationships make people sloppy. He needs to stay on his game, or we’re all doomed.”

Mrs. Langley’s husband had left her for a younger woman almost a decade previous. She treated romance novels the way most people treated rotary phones — with horror and disdain. The nurse bit back a smile. “Ah, but isn’t every girl’s dream to be the one who makes the hero forget himself?”

The patient’s snort echoed among the room’s medical equipment.

Pamela winked at her and returned to entering information into the portable computer workstation. By all accounts, Mrs. Langley was doing well. As soon as her blood sugar stabilized, she would be released to the floor. A particular sense of accomplishment came with shipping someone from ICU out to a regular-care wing, called the floor by medical personnel. Pamela hoped to see Mrs. Langley on her way before the day ended.

Mr. Alvarez came next. She slipped through his door and cast searching eyes around the room. His wife spent as much time at the hospital as she could. With two children at home, though, she faced a constant struggle to balance where she was most needed on any given day. The dark circles normally under the eyes of the patient’s faithful mate told the tale of a woman torn between love for her husband and love for her kids. 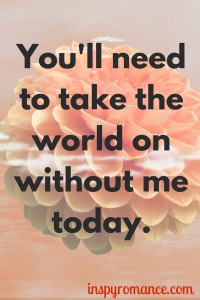 On this morning, though, Mr. Alvarez was by himself.

“Hey, Nurse Pamela,” came the dry voice from the bed. “How are you?”

She pasted a bright smile on her face. “I’m doing fantastic. I got a good night’s rest and am ready to take on the world. What about you? Want to take it on with me?”

“You’ll need to take the world on without me today.”

“I’ll get some ice here in a bit. In the meantime, drink this.” Deft fingers worked quickly, opening a small eight-ounce bottle of water and placing a straw in it. “Sounds like you could stand to wet your whistle.”

The rasp in his voice was expected. Pure oxygen, dryer than the mixed air breathed in naturally, had that effect on people. Hoarseness was one of the side effects of the parched nose and throat tissue that came from being on straight oxygen.

He took a sip and handed the bottle back to her.

With the blood pressure and capillary refill checks complete, Pamela leaned in with her stethoscope and listened to his lungs. “My job is to make sure you get back some of your fight, Mr. Alvarez. Besides, we have some formidable work ahead of us, so rest up and regain your strength for the mission. I’m not letting you get out of it that easy.”

“It must be hard.” His soft words came as soon as she removed the stethoscope from his chest.

“Taking on the world? I believe it’s as difficult as we make it.” Her smile faltered, so she forced a positive nod to emphasize her optimism — or to fake it, since it seemed to be temporarily misplaced.

He didn’t respond, and she inspected him more closely.

Shadowed eyes scrutinized her in return. “Your job — watching people die — it must be hard.” His voice cracked on the last. 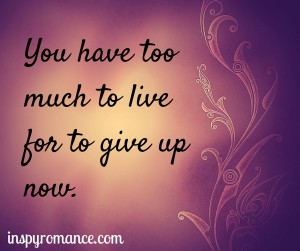 She took his hand and held it between her gloved ones. “Don’t give up, Mr. Alvarez. We’re fighting for your life here, and you need to be with us in this. If you give up, the fight’s already lost. You have too much to live for to let that happen, right?”

A deep sigh escaped as he rested his head back against the sterile plastic pillow wrapped in a white cotton case. “Give me some time, Nurse Pamela.” Fatigue drained his voice of energy and made it a whisper of what it once must have been. “I’ll be ready to take on the world with you.” His eyes conveyed frailty, while his calloused hand spoke of hard work, days spent outdoors, and vibrant strength.

With a gentle squeeze, she settled that hand back on his blanket. “That’s the spirit. I’m not giving up on you, so don’t you dare give up on yourself.”

A short time later, she stepped out of his room and over to the desk where his chart rested. In addition to vitals and medications given, medical staff often wrote notes about a patient’s state of mind. The comments served to alert others going into the room to use prudence when addressing certain topics. They also created a documentation trail in case mental health ever became a concern. Patient is despondent and Patient is optimistic about recovery were some of the remarks Pamela had logged in the past. On this day, though, her eyes drilled holes through the paperwork and desk beneath as she struggled with what to write. 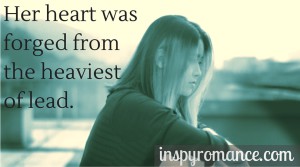 Her pulse picked up speed as the unfairness of the family’s situation pushed and pulled at her. She eventually entered the patient’s vital signs, but when she reached the NOTES section, she couldn’t bring herself to put pen to paper.

When she rose from her task to check on a pharmacy delivery, she did so with a heart forged from the heaviest lead. Some things didn’t need to be put in the chart. Leaving it out, though, didn’t mean she laid those burdens down and no longer felt the weight of them.

Look for the third installment of “Never Imagined” in November at inspyromance.com.