At long last – the fourth and final installment of “Never Imagined.”  I can’t thank you enough for staying with me through this story.  If you need to catch up, you can read part one, part two, and part three here.

Home from work, Pamela stepped down into the sunken living room of her modest cottage-style home. The room, bathed in darkness except for one lamp strategically positioned next to a leather recliner, always held an air of gloom. What she wouldn’t give for the time and money to redo the walls. The dark paneling was dreary on the sunniest of days. 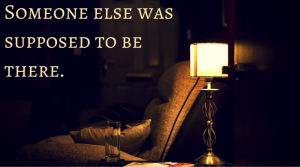 The person sitting in the chair wasn’t who she’d expected to see. Pamela strode further into the room and searched its dark corners with her eyes.

“Heya, Miss Pamela. How was work?”

“Today was a good day, Sue.” Fatigue clawed at her shoulders until they submitted with a droop. If Sue was still here, that meant… Dread descended like fog on a Blue Ridge valley.

“Lizbeth called in sick, and the agency can’t find a replacement for tonight.”

Hopelessness blanketed her and threatened to overtake her defenses, but she battled back. “God works all things together for the good of…”

“Huh?” Sue rose from the recliner and stared at her with curiosity.

“A Bible verse. I was just reminding myself that everything will work out.”

Sue’s brow wrinkled. “I don’t understand how you do it, believing in a God who allows things like this to happen.” The home health nurse waved a hand at the hospital bed taking up most of the small living room. “But I guess I respect you for holding to your faith.”

Pamela tried to find the energy for a smile, but her reserves were too depleted. “Ask me sometime when I’m rested, and I’ll tell you.”

A shrug said the question would probably never come. “I’m off the next two days since you’re home, but I can come in the morning for a few hours if you need. That way you can shower and grab a short nap.” 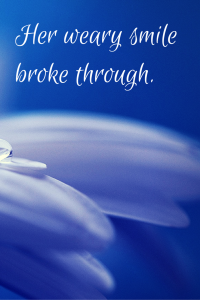 The generous offer was the incentive she needed. Pamela’s smile, though weary, broke through this time. “I would appreciate it.”

“Alrighty then. I’ll stop by around ten.” Waving to the bed, Sue added, “Have a good night, Mr. Todd. Don’t give Miss Pamela any trouble now.”

After locking the door behind the exiting woman, Pamela stepped over to the hospital bed.

She gazed down at the peaceful face. Months had gone by since any words had passed the lips of the man lying there. Her fingers ran through the straight brown hair and brushed it from where it fell across his closed eyes. “You’re due for a haircut. Maybe tomorrow after I’ve gotten some sleep. I’m not sure I trust myself with scissors at the moment.”

Rarely did anything eventful happen in this room, but even so, the patient needed around-the-clock monitoring. Unconscious, he had no ability to cough or sneeze, no way to clear his own airway from blockage or even draining sinuses. For that reason, among others, Pamela couldn’t find rest in her own bed this night.

Her movements automatic, she soon found herself with a large mug of coffee and a cumbersome suspense novel with a bookmark poking out a third of the way through the pages. She set both items on the end table by the recliner and moved to the bed one more time.

Leaning down, she kissed the cool skin of his forehead and gave his hand a squeeze. “I’ll tell you about my day later. I’m too sleepy to string the words together right now.” Her feet found their way to the recliner where she’d spent many sleepless nights ever since her living room had been turned over to medical equipment and a home health nursing staff.

She took a drink of her coffee and picked up the book. Before she opened it to the bookmark, she took the time to wipe away the stray tear meandering its way down her cheek. 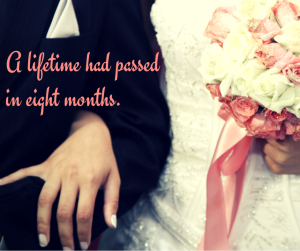 Eight months past, Pamela had walked down the aisle to stand beside the man who had never failed to make her heart race with his nearness. Life had since taken some unexpected and painful turns, the kind that would put the best rollercoaster to shame in the heart-stopping, stomach-dropping department. When she’d said, “I do,” she’d never imagined where marriage would take her.

There’s a difference between a love story and a romance – at least in literature.  As I wrote this story, I fully intended it to be a romance, but I ended up with a love story, both for the Alvarezes and for Pamela.  I have to admit, I like a good love story, the kind that seeps my soul and changes me for the better.

Having said that, I am reminded that the name of our group here is Inspy Romance and that a love story, no matter how much I like it, isn’t quite what readers expect.  So I will take a minute to apologize if you didn’t get the Happily-Ever-After you were hoping for.

On the bright side, I’ve become enamored of these characters.  I wrote this story fully intending for it to end here, but I’m not quite ready to let go of Pamela and her husband.  I plan to make time to write more of their story and –hopefully – have it publication-ready sometime in 2016.  I didn’t intend to use this short story as a launching pad into something bigger, but it appears that my characters didn’t do a very good job of heeding my intent.

In any event, I hope you’ve enjoyed the journey here with the Alvarezes and with Pamela.

If you liked the hospital setting of this story, I have a book out that takes place in a pediatric unit of the hospital.  You can take a look at An Informal Christmas here.  I promise – it has more of a traditional romance ending. (You can also find it in the Love’s Gift boxed set.)

In the meantime, I’d like to wish all of you a Merry Christmas!  I hope that, as we go through this holiday season, you will remember the greatest love story of all – the one with a holy Father who, out of a bottomless well of love, sent His cherished only Son to live with and to redeem mankind. 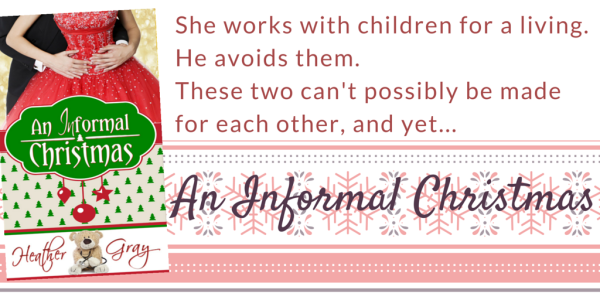