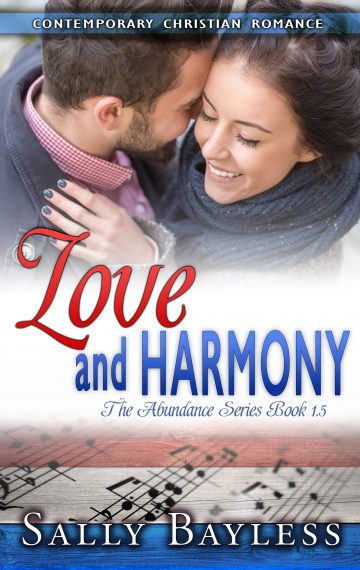 No, that’s not my name there in the title. I met Sally Bayless back in 2013 when we were both finalists in the Genesis contest for unpublished writers. Since then, Sally has published three books —  a novel and two novellas — all set in the town of Abundance, Missouri.

Ever heard of Susie May Warren? Sally Bayless reminds me of her. Sally’s novel has a bit of an ensemble cast with more than one couple working their way through their romantic struggles, and the novellas tie in with the stories of secondary characters. They’re all small-town, sweet and clean romance that aren’t sappy but are fun, lighthearted and emotional, and — best of all — satisfying.

Her series is called The Abundance series and follows the Hamlin family. Here’s an excerpt from Sally’s novel, Love at Sunset Lake. 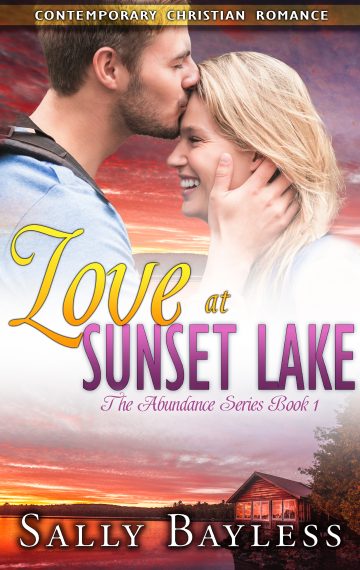 “Can I show you something?” Jack asked as he undid his seatbelt. “On the other side of the lake?” He glanced at her.

Tess turned toward him. “What?”

“One of the mother wood ducks brought her ducklings out on the water this morning.”

Tess’s forehead crinkled, as though that was not what she’d been expecting.

“Eight of them. They’re pretty cute.” But she wouldn’t want to see them. And even if they were wildlife painters, men didn’t admit they liked baby duck—

So maybe his invitation wasn’t totally insane. He hadn’t meant to invite her, like he hadn’t planned to help with the boxes, but the woman seemed to override his good sense. And when she touched his arm—

Tess put her purse inside the house and joined Jack in the backyard. She pulled on a jacket. “Which ones are the wood ducks?”

“The drake has a greenish-purple head with a red eye. The hen is brown with a white eye patch. Do you know the ones I mean?”

“Not really.” She scrunched up her face.

He walked beside her to the path that circled the lake, telling her about the different species of waterfowl that visited Sunset Lake each year. They progressed northwest around the lake, and he identified the ducks that swam past, a blue heron in the reeds across the water, a red-tailed hawk that dipped and soared overhead.

They rounded a bend in the shoreline, and Tess pointed. “Is that another of those blue-winged teals?”

“It is.” She was smart, quickly picking up the differences among the species.

“A drake, right?” She turned to him, face lit with expectation, like the girl in the front row who always knew the right answer, who always wanted affirmation. A few strands of her blonde hair blewacross her face, and she veered from the path, closer to the water.

“Yes, but be careful. I know from when I was a kid that those reeds are always—”

Tess’s feet slid out from under her. She landed with a yelp, backside in the mud.

Jack rushed to help her up, but by the time he got to her, she was on her feet.

“I should have watched where I was going.” She twisted from one side to the other, trying to see down the back of her legs. “How bad is it?”

Mud covered the seat of her jeans and brown splotches spattered her legs. If he told her the truth, she’d want to head back.

“That bad, huh?” She gave a soft laugh, that same kooky laugh he’d heard before. “My own fault, too. C’mon. I want to see the ducklings.” She tromped toward the path with a determination that brought a grin to his face.

Chloe hated everything about the lake, would never have hiked through the mud to see ducklings. Tess was actually having fun.

And so was he.

Jack tipped the idea from side to side in his head, searching for a defect in his thought processes. No, no defect. He was having fun.

“Yeah,” he said. “I lived here until I started college, then came back after I worked in Chicago awhile, bought the place from my parents.”

“Oh, that makes sense. I guess when I came here, when I was in high school, you were away.”

He nodded. He’d thought she was about five years younger than him. And he hadn’t come home much in college.

They passed a clump of trees and reached the northern tip of the lake. He led her off the path, closer to the water, but to a spot he knew would be dry. A narrow cove stretched before them, and the water reflected the orange and russet and violet of the sky. About ten feet out, a mother wood duck glided through the water, and eight ducklings followed in her wake, fluffy brown-and-yellow adventurers, each marked with a dark cap and stripes drawn back from its eyes.

“Oh.” Tess’s word floated out on a sigh. She raised her hand toward her chestand watched the little family. “They’re darling.”

For at least five minutes the family of wood ducks played in the cove until at last Mama Duck led her babies farther out.

Tess looked up at Jack, her eyes soft and luminous. “I’ve been so caught up with the collectibles, I never noticed them on the lake. Thank you.”

Without thinking, he reached out and ran a finger down her cheek.

Her eyes widened and grew bluer, but she didn’t move away.

With his other hand, unable to stop, he drew one pin from her hair.

A tendril burst free and feathered against his fingers in the breeze. Pale silk, teasing against his hand.

His whole body ached to touch her again. Should he? Did she want him to?

A slight color rose in her cheeks.

He pulled out another hairpin.

Pin after pin after pin, he freed each tendril until her hair tumbled down over her shoulders. That sweet floral fragrance surrounded him, reminding him once more of his grandmother’s garden. Of honeysuckle and happiness.

He shoved the hairpins in a pocket of his jeans, and then, slowly, savoring the softness, he threaded his fingers into her hair until they met at the nape of her neck.

She dropped her eyes to his mouth and slid one arm around his waist, and he lowered his lips to hers. 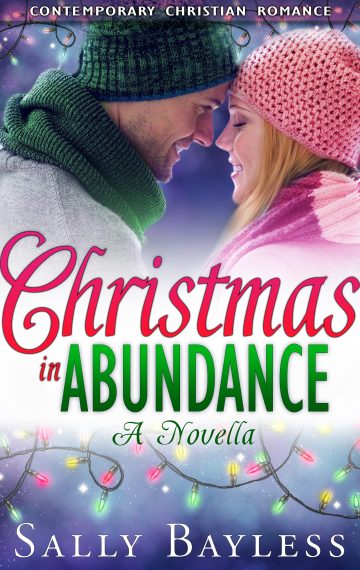 Sally Bayless is a former synchronized swimmer (really!!!) and corporate communications editor who’s well on her way to entertaining readers everywhere. If you love fiction that gently mixes humor with the struggle of being human, you’ll love Sally’s books. (And if you’re a Kindle Unlimited member, they’re all available there!)

So has anyone here read Sally’s books yet? Or is she a new-to-you author?