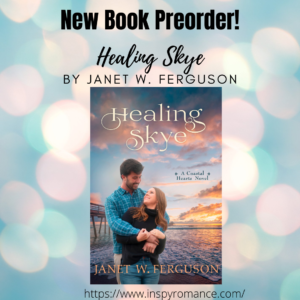 Hello Inspy Romance! I’ve been working hard and doing a lot of research all year for a new novel called Healing Skye! I decided to share an excerpt with you today!

My heroine is Skye who is a marine biologist. If you follow my on social media, you know I love taking pictures of creation. That made researching marine biology a lot of fun! God is an incredible artist!

Here’s part of the first chapter:

Almost to the Gulf. Almost to the part of the world she’d left behind nearly a decade ago. Skye Youngblood had loved these warm waters, the golden marsh grass bowing in the southerly breeze, the hungry herons peering out at the surf, the dolphins crowning in the golden light, the rhythm of the tides. Nature’s dependable laws had a way of soothing rattled emotions inside a cracked human soul. During her chaotic childhood, the humid salt air loosened the relentless feelings of hopelessness that had squeezed around Skye, allowing her to breathe. Days wading in the Gulf’s warm waters with her sister had chased out some of the darkness that haunted her.

Beneath the shining surface of the deep, the glory expanded and multiplied. The bays, marshes, and sea clamored with hidden life. Hidden death too. All shrouded below the frothy waters, where few took the time to observe.

She lived that hidden life, too, out of sight as much as possible, hoping her past wouldn’t catch up to her.

Because some horrors should stay buried.

The hero Pete is a charter fisherman, a widower, and the father of a little girl. Here’s a little of his POV in the first chapter:

Frustration boiled, though he respected the way she cared for her haphazard trio. “You won’t be any good to your pets if you’re injured. You have to take care of yourself.”

Caramel-colored eyes met his and stayed there, evaluating him, piercing into his soul, it seemed.

The words came clearly into his mind, sending a fresh burst of adrenaline.

What? No. I’m not ready. Probably never will be.

The stress of the situation had to have triggered the disturbing thought.

The door opened, and the girl slipped out. She stood before him. Not a girl, but a woman. He reached for her face, but she jerked back.

A scared wisp of a woman. There was nothing he could do if she wouldn’t let him near her.

I hope you enjoyed the sneak peek! 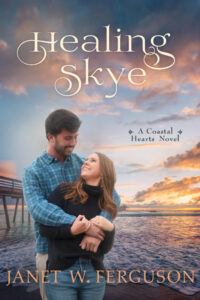 Here’s the back cover blurb:

Animals always made more sense than humans did to marine biologist Skye Youngblood. After her mother’s suicide, she left Alabama and never looked back. These days, she pours her heart into protecting nature’s sea creatures. When she returns to Dauphin Island, Alabama, for a temporary manatee migration study, her dark past is much too close. She can’t let her guard down. But how can she keep her heart hidden when a kind man with a genuine smile makes her want a fresh start?

Charter fishing pays the bills for widower Pete Thompson and his little girl, but like his father, a pastor, Pete can’t help but fish for men. Only, after growing up under constant scrutiny as a preacher’s kid, Pete’s ways are a bit more unconventional. And the bulk of his life revolves around raising his precious daughter.

When he witnesses the car wreck of a new marine biologist on the island, it doesn’t take a genius to see that more than just her physical pain needs tending. Pete feels called to help Skye find true healing, but he’s navigating dangerous waters. And he’s not at all sure he’ll walk away unscathed.

Preorder for the December 16th here!

Question for you: What careers would you enjoy researching?