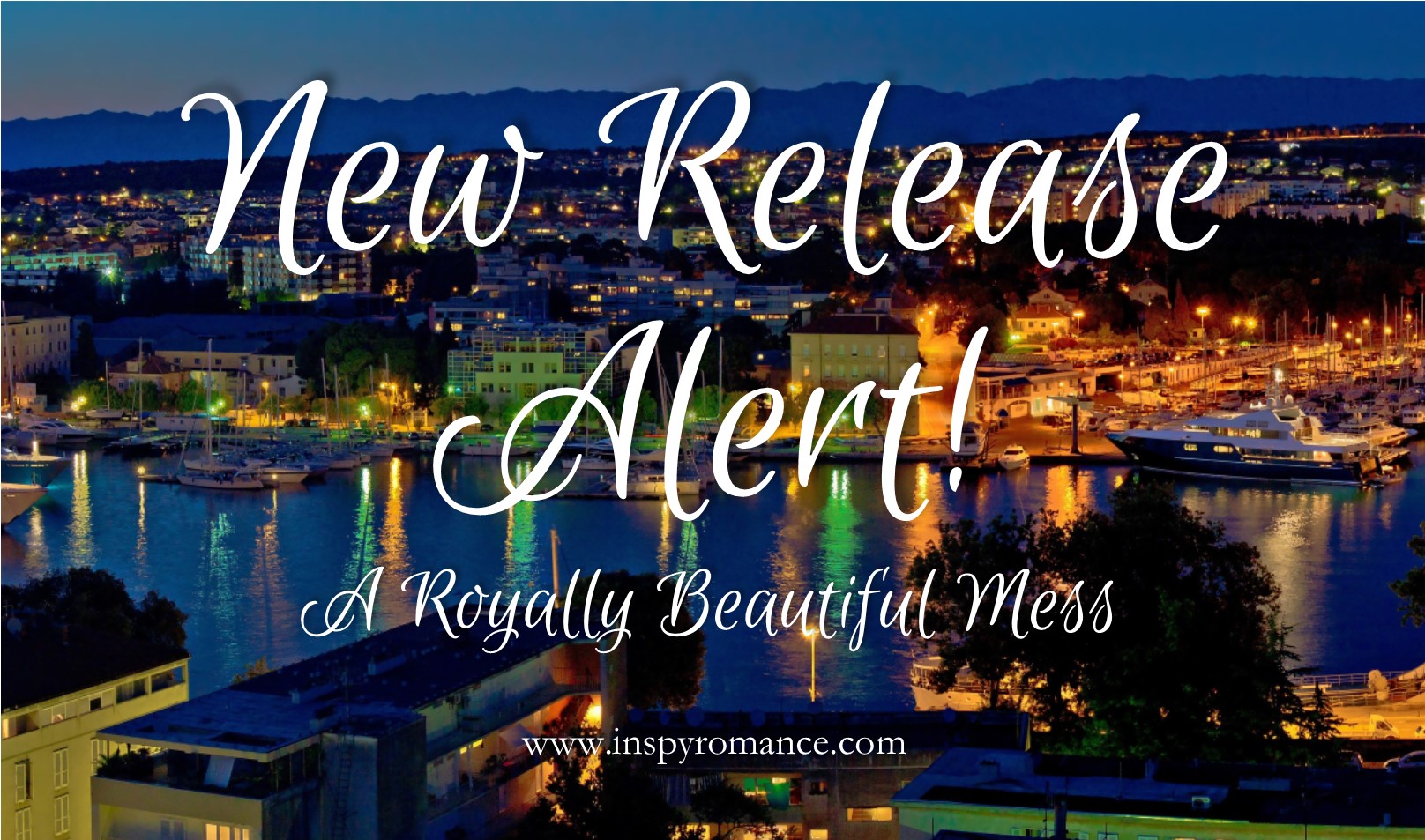 Hey everyone! I hope you’re having an a good Easter weekend and have plans with friends or family tomorrow.

In a couple weeks, book 3 in the Crowns & Courtships series releases! A Royally Beautiful Mess releases April 17! To celebrate, book 2, The Inadvertent Princess, will be on sale for .99 from April 16-April 22.

Meantime, here’s a sneak peek at A Royally Beautiful Mess.

Esther Miriam Victoria Jasmine, Princess of San Majoria, stared at herself in the mirror, specifically at her hands splayed against her lower abdomen. Somewhere beneath them a small life had already begun.

She had to deal with the consequences of her choices. The choices that began with her desire to remain anonymous at a private resort in Islas del Sargasso a month earlier.

Innocent flirtation with a handsome foreigner about her age led to heated kisses and four days when she ignored the niggling voices in the back of her head that her actions would cause reactions.

This one had come a bit out of the blue, though.

When ignoring potential outcomes those days holed up in a secluded hut, pregnant had never crossed Esther’s mind.

What was done was done, and now she had to deal with the fall out.

She hadn’t even known who he really was. He’d used the nickname Dare, which she’d found amusing given it was also the nickname of her brother-in-law’s best friend. Canadian Dare was handsome in that older brother, crazy hair, hockey player sort of way.

This Dare, the one she’d thrown her future out the window for, defined cute in a way she found far, far more desirable.

If only she’d realized why he looked familiar before she found a business card he’d dropped.

The morning after he left.

When she woke up alone, rejected, and loathing herself for everything that had happened in the days prior.

Upon seeing his name, in black script on a white card laying halfway under the side table, Esther had bolted to the bathroom and heaved for ten minutes straight.

A quick knock sounded on her door seconds before it opened. “Your father will see you now, miss.”

A month in Eyjania, avoiding everyone and everything, even her older brother Kensington who was also staying at Aberswythe Hall, and it boiled down to this.

Her father had come to visit for some reason she didn’t understand, but she couldn’t wait any longer to tell him the truth.

Footsteps echoed through the empty halls as she approached her father’s office. No one waited in the outer area. His door was cracked open, so she went in.

He was on the phone, jabbering away in Italian as he waved for her to have a seat. She perched on the edge of one of the armchairs and waited. A minute later, he hung up and turned.

Tears filled her eyes at the thought of his impending disappointment in her.

“Do I need to have a seat for this conversation?”

All she could manage was a curt nod.

He sat in the chair behind his desk and waited for her to speak, but his patience wouldn’t last forever.

“I met someone,” she finally blurted out.

Her father just rocked a bit in his chair and stared at her.

Anything but the disappointed stare that was only going to deepen.
She had to just say it. “I’m pregnant.” She forced the words past the lump in her throat, the whisper ripping from her.

His face remained impassive, though his rocking faltered for just a second. He was a king. Presenting the face he wanted to the world was part of his nature.

After nearly two minutes of disappointed silence, he spoke. “Who is he?”

Tears had streaked down her face, and Esther swiped at them with the back of her hand. “He went by Dare.”

His face shot up at that. “Not Jordan’s friend?”

She shook her head. “No. He would never cheat on Betsy, you know that.”

“I know a lot of things, some of which I didn’t know as well as I thought.”

The now well worn card went on his desk. “I found that after he left. I looked him up, and the picture matched.”

Her father picked it up and stared at the words on the card stock. “You didn’t recognize him beforehand?”

She shook her head. “I hadn’t seen him since we were children. Probably before his father died.”

“Did he know who you were?” He held out a box of Kleenex to her.

“Thank you,” she whispered, taking one. “I don’t think he did. I told him my name was Star.”

“So you want me to march in there and inform them that he’s the father of your child when he doesn’t even know he slept with a princess, much less the daughter of his father’s best friend?”

“I didn’t ask you to do anything.” She wanted him to, needed him to, but she hadn’t actually asked him to do it.

He let out a deep sigh and stood, walking around the desk until he stood in front of her. “Oh, Esther. My little star. Come here.” He held open his arms and she stood, collapsing against her father and his strength.

Deep, gut wrenching sobs, tore from her as he held her in his arms until they slowed.

“How far along are you?”

She managed a shrug. “I haven’t seen a doctor.”

“Then when did you meet him?”

“Earlier last month when I went to that resort on Islas del Sargasso.” Jacqueline Grace was supposed to go with her but had taken sick and decided to stay home. Given the security already inherent at the private resort, she’d only taken minimal security of her own and was left basically to her own devices – especially when she essentially didn’t leave her hut for several days in a row. Either her small security team didn’t know Dare stayed with her those days, or chose to keep their mouths shut since there was no actual danger to her.

He moved away from her and her father disappeared to be replaced by his king persona. “I have to go see them in ninety minutes or so anyway. Get cleaned up. You’re coming with me, and we’ll deal with this together.”

Esther nodded. She had no real choice, and no stylist to help her. She’d have to do her best and pray she didn’t look like an absolute mess when she came face-to-face with Dare again.

Younger brother of King Benjamin and first in line for the throne of Eyjania.

There you have it! The opening of A Royally Beautiful Mess. Darius and Esther are going to have to live with the consequences of their actions in Islas del Sargasso a few weeks ago! It’s currently at the special preorder price of 2.99! 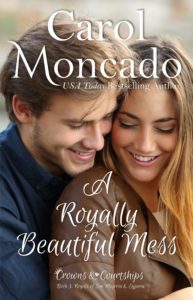 Life is messy.
Even more so when you have to deal with two royal families and the expectations of two countries.
And a 200-year-old treaty
Add a scheming royal uncle and one really big surprise, and things just might get a little out of hand.

Princess Esther of San Majoria has always done what’s expected of her. Until she met a handsome stranger at an exclusive resort. Weeks later, she’s discovered his true identity and is dealing with the fallout of their time together. With her father’s help, she’s going to make things right, then head straight to Serenity Landing University to finish her schooling.

Prince Darius of Eyjania isn’t sure what being called into a meeting with his older brother, King Benjamin, and his uncle could mean, but he’s sure it’s nothing good. His suspicion proves correct when the King of San Majoria confronts him about his secret vacation a few weeks earlier. When his uncle tries to threaten King Edward, the other king promises to invoke the Treaty of 1702 – whatever that is.

To appease their most important trading partner, and because it’s the right thing to do, Darius finds himself living in the States, married to the most beautiful girl he’s ever known – and she wants absolutely nothing to do with him.

With secrets, international treaties, an uncle who will stop at almost nothing to get his way, and a potential exile, Darius and Esther have to learn that even in the mess, it can be beautiful. It can be A Royally Beautiful Mess.