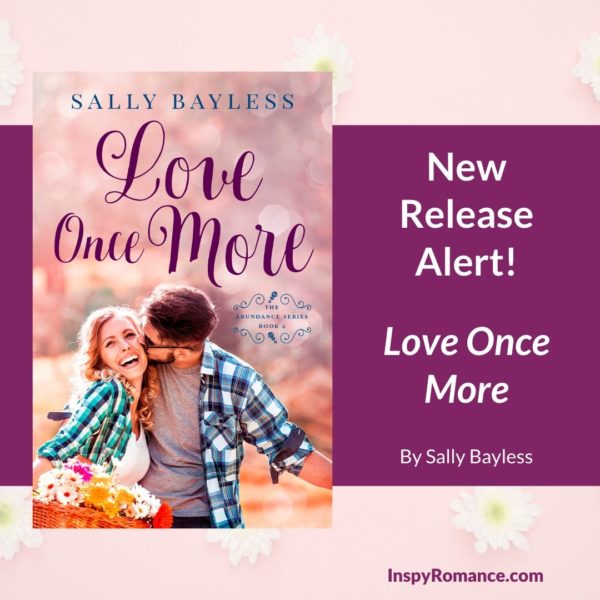 Hi Everyone! I’m so excited to share that the next novel in my Abundance series, Love Once More, releases next week! It’s currently available for pre-order, and on March 13 it will release in ebook, Kindle Unlimited, and (if all goes well) paperback. Here’s a little bit about this contemporary Christian romance and a sneak peek at part of the first chapter!

Here’s how Chapter One starts!

Anyone could—if he or she put half a mind to it—leave the past behind and focus on the future. At least that’s what the self-help books all said.

It’s also what Kristen Hamlin kept telling herself as she climbed the porch steps of her sister’s antique shop.

And what she’d told herself for weeks, ever since she finished reading A Better You in Ninety Days.

But it didn’t feel like anything about her had changed.

At least not yet.

She blew out a long breath and opened the door of the shop, forcing her mood to lighten. After all, her sister was back in Missouri after her honeymoon, and it would be great to catch up with her again.

She stepped over the threshold, entering the former Victorian home that was now a shop filled with antiques. A blur of pink satin sped toward her.

Kristen’s heart swelled with love as she knelt and gathered Emma into a hug, pressing a kiss into her red curls. “Hey, there, cutie pie.”

“Mommy and Nate are back!” Emma’s blue eyes danced. “They brought me seashells and a T-shirt and—”

“And she’s decided we should go on a honeymoon every June.” Abby came around a display of milk glass. “I get the impression Mom might have spoiled her a little while we were away.”

Yeah, Mom might have. Kristen might even have helped. But she wasn’t about to confess that to Abby.

“I’ve been sworn to secrecy,” Kristen said. “All I can report is that I watered the plants at your new house and kept the shop.” Which she’d enjoyed. The store was soothing, with its artfully arranged reminders of a simpler time, faint scent of furniture polish, and the gentle tick of the mantle clock in the front. No wonder customers frequently stopped in simply to look once more at a beautiful dresser or peruse the glass cases of antique costume jewelry.

“But I’m here, as promised, bright and early Monday morning, to give you an update on how sales went,” she said.

And putting her own work schedule on hold for a few hours while she did so. But since she worked as a freelance textbook editor, her hours were fairly flexible. If she couldn’t make time for her sister, what was the point of having that freedom?

Abby straightened a set of milk-glass punch cups that surrounded a matching punch bowl on a large Demilune table.

Kristen peered closer at her older sister. Shouldn’t Abby be glowing after a whole week alone with her handsome groom? And be happy that she and Nate and Emma had moved into their new house on the outskirts of Abundance?

Abby adjusted one more cup, then rested a hand on Emma’s shoulder and smiled down at her. “Sweetheart, why don’t you run upstairs and show your stuffed animals all your pretty new shells?”

“Okay, Mommy.” Emma picked up a turquoise beach pail and scampered up the stairs.

Abby’s gaze followed her, but her smile faded as the slap of Emma’s flip-flops grew fainter. “We need to talk,” she said quietly.

“Was there a problem on your trip?”

Abby’s hazel eyes lit. “No, it was lovely. Really lovely, but…” She led the way to a small seating area near the front of the store, a spot designed for weary shoppers to rest. “I popped over to Cassidy’s Diner to get us a treat.” She gestured to a carry-out container and glasses of ice tea on the coffee table. “And I heard all the latest here in Abundance. Including some bad news.”

And that’s how Love Once More begins! If you’d like to read the rest of Chapter One, just click here to see it on my website!

To help one reader get caught up in the series and ready for this book, I’m giving away a free copy (one Kindle copy, available worldwide) of Love and Roses, the book that comes right before Love Once More chronologically. If you’d like to be included in the drawing, please comment by Tuesday evening, March 10, 2020. One commenter on this post will be chosen at random, notified by email, and announced in a Sunday edition.