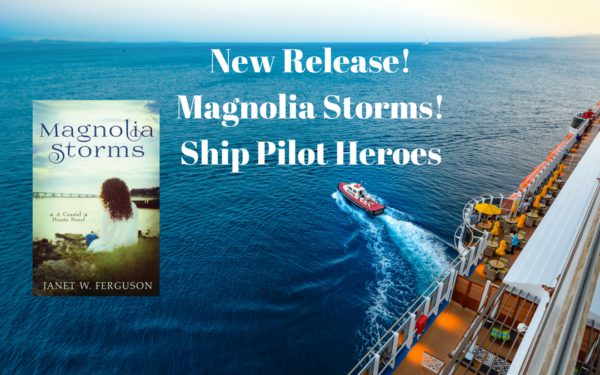 I’m excited to tell you about my new novel releasing September 15th called Magnolia Storms! And, of course, I can’t wait for you to meet the hero of the story, Josh Bergeron!

While researching the port of Mobile for my last novel Blown Together, I learned about ship piloting. I didn’t really know what that career entailed, but  I was instantly fascinated, and I knew right away that I’d found the next hero for a new novel. (You’ll probably want to turn the music way down or off on the first one.)

So what does a ship pilot do?

Ship captains travel the world’s oceans delivering cargo, but as they approach shallow water, they need pilots aboard to advise them for safe passage.

The pilot boat meets the ship and maneuvers alongside the moving ship whose crew has rigged a pilot ladder that the pilot uses to climb up to the main deck of the ship.  That’s where things can get tricky!

The pilot makes his way to the bridge where assumes control of the ship and directs its movement by giving orders to a helmsman who steers the ship.

The pilot disembarks only when the ship is safe from the danger of grounding.

I hope you’re as fascinated as I am! Here’s more about Magnolia Storms!

Magnolia Storms
A Coastal Hearts Novel
When you pass through the waters, I will be with you….
​

Maggie Marovich couldn’t save her father or her home from Hurricane Katrina, but she’s dedicated her life to meteorology so she can warn others when the monster storms approach. Except…she works three hours inland and rarely risks returning to her childhood hometown of Ocean Springs, Mississippi. Both her single-parent sister and the ship pilot Maggie once loved refused to leave the Coast, despite Maggie’s requests. Now a hurricane’s headed toward Mississippi, and Maggie’s sister is seriously injured, leaving Maggie little choice but to head south—into the storm.

The water and tides flow through Josh Bergeron’s veins, and he can’t imagine giving up piloting—even for the love of his life, the infuriating Magnolia Marovich. He tried to move on without her, marrying and having a child. But after his wife abandons him and his little boy, his career choice is threatened by the weight of his parental responsibilities. Moving next door to Maggie’s sister and sharing their child care seems like the perfect set-up. Until Maggie blows back into town.

Being forced to lean on Josh for help washes up the wreckage in Maggie’s faith. Where was God during the destruction of Katrina? Why do some prayers seem to go unanswered? Between the hurricane looming in the Gulf and another gale raging in her heart, can Maggie overcome her past and find the trust to truly live?

Since writing this novel, the disaster in Texas happened, and I’m certainly praying for all involved. Praying for Florida now, too!

I’m giving away one eBook copy of Magnolia Storms to one person who comments on the post by September 14, 2017! (void where prohibited)