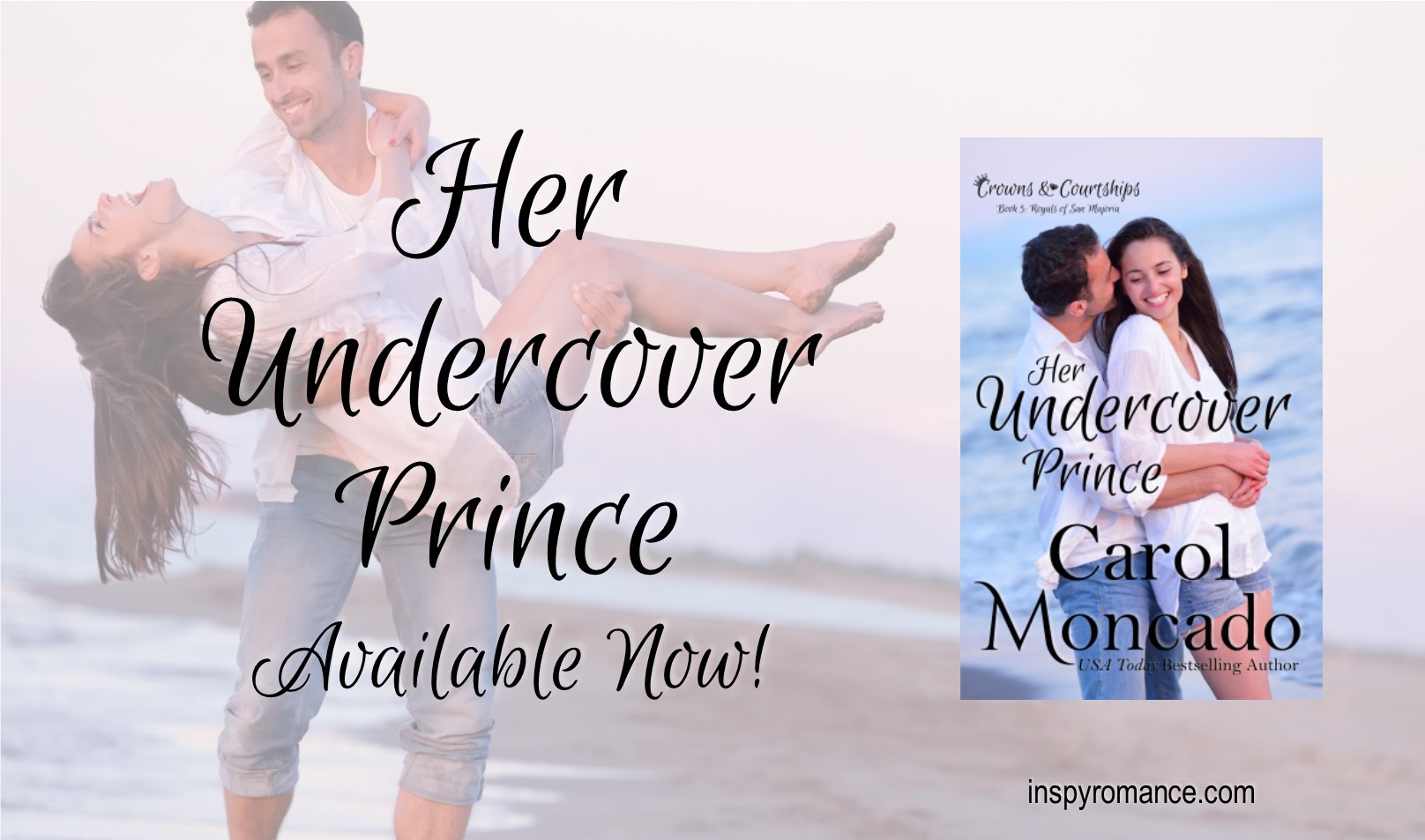 I hope y’all are doing well!

Have you ever wondered what authors do on release day?! For me, it involved a bunch of stores, shopping for food to feed 155 band kids the next day, then loading most of it in the truck for our competition.

But it kept me from obsessing over reviews and pages read through Kindle Unlimited and everything else ;).

I’m already hard at work on the next one, but thought I’d share a snippet of Her Undercover Prince with you today!

With a sigh borne of more than one kind of frustration, Princess Jacqueline Grace Victoria Eliana of San Majoria stifled the urge to reprimand her foster daughter as strongly as she wanted to, not with cameras following their every move. She’d probably be excoriated in the press for letting Kiara run off like she did. In reality, any other child likely would have done the same within sight of the bouncy castle situated on the beach.

But Kiara wasn’t other children.

She was a ward of the state, being cared for indefinitely by the royal family, specifically Jacqueline Grace, and could likely never be adopted. If her family was ever found, Jacqueline Grace would have a hard time handing her back over without a serious investigation into why they’d gone so long without their daughter.

She’d also be held to account if she didn’t put sunscreen on Kiara. But if she did, there would be some who called her out for using the wrong brand.

Jacqueline Grace hurried after Kiara, her security team members flanking her as they walked across the soft sand. Maybe there was a benefit to having a dedicated nanny.

That’s what she needed.

No. She needed more than that. She needed a partner. Someone to come alongside her and share her burdens.

Kiara had tossed her sandals to the side and had already found a new friend while jumping in the bounce house.

The security team directed Jacqueline Grace to a cabana set aside for her to use. She dropped her large shoulder bag on one of the chairs.

“Can I get you anything, miss?”

Tim, her security guard, looked outward even as he asked the question.

“No, thank you. I have some water and snacks.” She pushed her sunglasses onto the top of her head.

She’d no sooner settled into her chair than Kiara ran up, a little girl in tow.

“Jacquie!” Kiara was the only one to shorten Jacqueline Grace’s name. “Mary can’t find her daddy.”

Jacqueline Grace stood then knelt next to the girls. “Hi, Mary.”

The girl’s tear-stained cheeks brought out Jacqueline Grace’s compassionate side.

“You can’t find your daddy? Did he bring you to the party?”

Mary nodded. “He’s not really my daddy, but he brought me.”

Step-father maybe? “Do you remember what he was wearing?”

Jacqueline Grace looked to her security team. “Will you let the organizers know we have Mary and are going to look for her father?”

They wouldn’t go alone, but Jacqueline Grace wanted to pretend they were. She held out a hand to each girl. “Let’s see if we can find him. Can you tell me his name?”

Before they took two steps, a man ran toward them.

Tim stepped between Jacqueline Grace, the girls, and the frantic man. “You need to back up a few steps, sir.” He didn’t touch the man but moved him back.

Mary pulled her hand out of Jacqueline Grace’s and ran to him. “Daddy!”

Relief swept through Jacqueline Grace. That was over quickly enough. She returned to her seat.

“Thank you,” the man called around the security guard.

Jacqueline Grace shrugged as she tried to be elegant and sit down on a lounge chair at the same time. Was it even possible to sit down in one of these without looking supremely awkward? “Kiara brought her over a moment ago. I didn’t actually do anything.”

Jacqueline Grace gave him her public smile. “My pleasure.”

“Jacquie, can Mary play with me?”

She wanted to say no, but Kiara needed more children to play with besides her semi-adopted cousins, Sofia and Gracie. “For now,” she conceded. “If it’s all right with her father.”

Both girls turned on the man. “Please?” The hints of whine in Kiara’s voice would surely be reported on by the members of the press close enough to hear.

He nodded. “Stay where we can see you.”

We? He was planning to stay with her?

Her Undercover Prince is book 5 in the Crowns & Courtships series! You can pick up an ecopy or read through Kindle Unlimited now – paperbacks will be available shortly :).

Princess Jacqueline Grace of San Majoria is weary. Weary of cameras. Weary of her every move as a “single mom” being criticized. Weary of people who know nothing about her except what they see in a 30 second sound bite knowing how to run her life better than she does.

Weary of being alone.

In walks Dave Smith. With a gorgeous accent and magnetic personality, his presence both calms her and stirs up emotions she has little experience with. Jacqueline Grace isn’t sure what to think when her father sends Dave on a trip as her undercover bodyguard.

Shared experiences – including each raising a daughter they’re not related to – bring them together, but secrets could tear them apart. Secrets about her foster daughter’s parentage. Secrets among those tasked with protecting them from outside threats. Secrets about what really happened between them when a passport was lost overseas.

Secrets about who Dave really is.

When her family and the Quatremaines get together to finally publicly celebrate her sister’s secret marriage, threats and secrets merge. Is Dave the secret to countering the threats? Is he more than her undercover bodyguard? Could he be Her Undercover Prince?