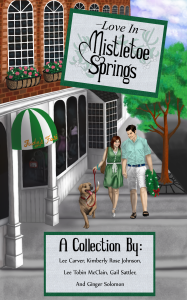 I’m excited to share with you about a new anthology release that several former and present Inspy Romance bloggers released this week. Love in Mistletoe Springs takes place in a small fictional Washington State town. The animal shelter is in danger of closing and supporters of the shelter rally to keep it open.

I’m a huge animal lover so this anthology especially appeals to me. My pet of choice is a dog, mainly because I’m extremely allergic to cats. How about you? Are you an animal person? Do you have a pet? Do you have a fun animal story to share? Feel free. :)

Each of our stories take place at the same time, but follow the lives of our own characters. The result, I hope, is an entertaining and sometimes humorous look at small town life and the passion of a few people to keep Second Chance animal shelter open.

I always say a story isn’t worth reading unless there is at least some romance, lol. Each of these novella’s deliver an entertaining story with plenty of romance. Here are the Back cover copies.

A Cockatoo for Two by Lee Carver
Nikki Waldrop is given a cockatoo because her son is allergic to hairy animals. But this biology teacher needs help from the principal, who once lived in Indonesia and knows about caring for a cockatoo. When the sick bird responds with “Gimme a kiss,” hearts begin to soar.

Brewed with Love by Kimberly Rose Johnson
When Amber Cook, the new owner of Main Street Java, meets firefighter Bryan Grant, can she overcome her deep seated fear of fire and discover true love?
Stray Gifts by Lee Tobin McClain
Dani Cooper has vowed to focus on her four kids and stay away from strays, whether animal or human. But will she be able to resist the handsome, mysterious veteran who shows up on her doorstep looking for work…and maybe, for a home and family too?

Mistletoe Madness by Gail Sattler
To say Kayla can’t function in a crowd is an understatement. The only help
she can get to do her part to help the shelter is the bane of her existence,
her brother’s best friend who has teased and harassed her mercilessly all
her life. But Drew’s feelings for Kayla have suddenly changed. Can he both
help the shelter, and help Kayla change her mind about him?

“Mr. Christmas and Miss Scrooge” by Ginger Solomon
She’s his boss and way out of his league, but that doesn’t keep Mitch Silverton away. At least, not for long. Can he break through Margaret Holberg’s walls to become more than just her employee?

Here is a sneak peek. Enjoy!

With barks echoing in the background from the building next door, Scott Mayberry scanned the group of people sitting around the table at Second Chances Animal shelter. These were the faithful volunteers who made the dream of finding homes for the strays and surrendered animals of Mistletoe Springs happen.

“Thank you all for coming with such short notice.” He glanced at his wife, Roxanne, who gave him a nod of courage. “I called this meeting because we need to deal with a very urgent matter.”

He held up the letter that he’d all but committed to memory. “We lost the grant. They decided to give the money to another shelter.”

Shocked murmurs and a few gasps echoed from the group.

Dani Cooper spoke up first. “Can’t we use our rainy day fund?”

Scott shook his head. “It’s not enough. Besides, it would only last for a couple of months. After that, we have many regular donors, but that’s not enough, either. By the end of the summer everything will be gone.”

Caleb Chase, the principal of the local high school, raised his hand. “I can activate the PTA and a few of the kids’ groups for some fundraisers.”

Roxanne stepped forward. “That would be great, but we also need something really big – something that will bring in even more money than our fall pet festival.” Roxanne’s voice cracked, then she cleared her throat. “Or we’ll have to close.”

Deafening silence rang in Scott’s ears. All eyes were fixed on him for a solution.

He opened his mouth to tell everyone how much he appreciated them, but before the words came out, a drop of water splashed down onto the letter.

He squeezed his eyes shut for a second, then again looked at the assembled group. “As if this isn’t bad enough, the roof is leaking since yesterday’s rain. We need to find a handyman who’ll do a good job and is reasonably priced.”

“So about the fundraiser,” Roxanne continued, “we need your ideas. It’s going to require a lot of planning. A location. Activities. Entertainment. Food. I’m thinking, maybe a barbecue. Something to motivate people to give, and give big. I’m going to get in touch with local civic groups, to see if they’d like to rent vendor booths as well.”

Everyone present stared at each other around the table. The volunteers had found homes for the feistiest pets, cleaned pens, washed dogs, and did anything that needed to be done. Scott almost smiled at the recollection of Dani Cooper scrambling around the yard to get a flock of wayward chickens into an empty pen just yesterday. Chickens. Now, that was a first for the shelter.

“I have an idea,” Amber Cooke raised her hand. “This is Mistletoe Springs. What about Christmas in July? We can have it the second Saturday of July so it won’t conflict with the fourth. A Christmas theme in a town called Mistletoe Springs would be a big draw.”

As discussions about Christmas and the tie-in to Mistletoe Springs ensued, Roxanne moved over to the white board, writing down everyone’s suggestions. “These are great ideas. But we’ll need a few more things for such an event, like entertainment. Amber? You have music connections. Can I count on you for entertainment?”

Amber’s face paled, but she quickly recovered. “Sure. I’ll do my best to not disappoint.”

Again, Roxanne scanned the crowd. “We’ll need decorations. If we’re doing Christmas in July it should look like Christmas. Who wants to be in charge of decorating?”

“I’ll do it.” Mitch Silverton’s voice came from the middle of the crowd. Though the young man had enough to do already, Scott appreciated his willingness to help. Others murmured their words of encouragement.

Kayla Kowalchuck raised her hand. “Planning a party and decorating and doing things to raise money is all very good. But the bottom line is to find forever homes for all the animals. Shouldn’t we have something to encourage people to adopt the animals?”

Scott frowned. “Of course. Would you like to be the person in charge of that? You can show how adopting a pet adds so much joy to people’s hearts and homes.” He waited as a sea of emotions rolled across Kayla’s face.

“I don’t know,” she mumbled. “I’m not really sure what to do. But I guess I’ll think of something.”

“Great.” Scott scanned the rest of the crowd. “Anyone else?”

As more conversation and planning continued, Scott’s heart swelled. It was a rag-tag group, but they would do their best for the beloved menagerie he and his wife had overseen for nearly two decades. He closed his eyes and prayed the group’s plans would fall into place.

When all was quiet he stood. “Thank you, everybody. With your help, maybe Second Chances will get its own second chance. Let’s go do it, and as Red Skelton used to say at the end of every show, ‘May God bless.’”