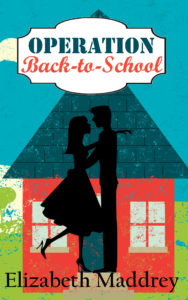 I’m so excited to announce the release of Operation Back-to-School, the fourth and final novella in my Operation Romance series. It came out on Tuesday as part of the Falling for You box set. I hope many of you got the set and are happily working your way through it already. But, in case you didn’t, you can get Operation Back-to-School, along with five other wonderful novellas, for just $0.99.

In Operation Back-to-School, we meet Shannon Cross, an executive assistant at Intelligence Associates, Inc. If you read the first book in the Operation Romance series, Operation Mistletoe, you got a hint of Shannon when Tori went to IA to do some research on the company. Shannon was the friend Angel mentioned who was working from home after the loss of her husband.

Well, now Shannon’s two girls are in school and it’s time for Shannon to return to work. And that’s what kicks off our story.

Here’s the back cover blurb:

He wants to be more than her daughter’s teacher.

Fraiser Campbell has finally landed his dream job: teaching kindergarten. Falling in love with the mother of one of his students isn’t in the lesson plan.

Now that both her girls are in school, Shannon Cross is ready to get back to the office. As for her personal life, she’s finally coming to terms with her husband’s death three years ago and adjusting to life as a single mom.

At back-to-school night, neither Shannon nor Fraiser can deny their attraction, and he’s determined to see where things lead. But learning to live without her husband is a long way from being ready to replace him. How can she fall for Fraiser without feeling that she’s betraying the first man she loved?

And here’s an excerpt:

When Mrs. Curtis dismissed them, Shannon tucked a note in Lizzie’s desk for her to find in the morning, and stood. Two minutes ‘til nine. Her heart sank. Mr. Campbell was probably already gone. But she had to try. If he asked Jillian why her mom hadn’t come…the tears weren’t worth contemplating. Shannon zipped down the hallway and let out the breath she’d been holding when she saw lights still on in the classroom. She paused outside the door.

“I thought I made myself clear last week? Carol, Ms. Durnagin, I don’t want to go to the administration, but I will if I have to.”

Shannon winced at the ice in Mr. Campbell’s voice. Maybe…but no, she needed to get the packet from him and beg him to please not tell Jillie that she’d missed. She cleared her throat. “Hi, excuse me?”

Carol stiffened, scowled at Mr. Campbell, and stalked out of the room.

He eyes lit up and he extended his hand. “Fraiser, please. At least when there aren’t kids around. I remember you from the first day of school.”

He remembered her? She hugged the notebook and packet of papers from Lizzie’s room to her chest. “I’m Shannon. I have a first grader this year, too. I was hoping I could figure out a way to make it to both classes, but…”

She flinched. Almost three years and she still wasn’t used to the stabbing pain when she had to explain to someone new. “No. He’s…he passed away when the girls were little.”

“Oh. I’m so sorry.” His face was red, bordering on purple. Shannon almost smiled. No one would ever say he could blush unobtrusively.

“Thank you. I’m…we’re…it’s been a while now.” Not that the pain went completely away. Would it ever? Did she want it to? But there were days when she didn’t think of Simon for hours at a time. Everyone told her that was good progress. “Anyway. I was hoping I could get whatever you handed out, maybe the condensed version of your spiel? And maybe that you wouldn’t mention to Jillian that I didn’t come and hang on your every word? She’s full of ‘Mr. Campbell this’ and ‘Mr. Campbell that’ and I don’t think she’d forgive me if she knew I didn’t make it.”

He chuckled. “I can help you out, no problem. I’ve got all the usual school forms and then I tacked on some suggested ways to work on literacy at home—although I wouldn’t say you need them, from what I’ve observed already with Jillian, she seems like she’s right where she should be. Or beyond. Is she reading?”

“A little. She got jealous watching her sister read last year and insisted that she wanted to read, too. I didn’t think it was a good idea to say no.”

“You did the right thing, for sure. She didn’t say anything when she came in for her placement interview over the summer? They didn’t mark anything next to her name, and the other kids who are reading are all starred.”

The interview. Shannon shook her head. “We basically didn’t have an interview. We tried—twice—but between scheduling nightmares and Jillian freezing up, it just didn’t happen. So I let it go. I wasn’t angling for any particular teacher, anyway. Since Mrs. Lindsey left at the end of last year, having the same teacher as her sister wasn’t an option. Beyond that, I didn’t care.”

Shannon smiled. It was nice to hear both of her daughters’ teachers say something along those lines. “I’ve always thought so.”

Fraiser handed her a stapled packet of papers. “Everything’s in here. Do you think you’d ever have time to volunteer in the classroom?”

“I…maybe? I work, but my company is great. They’ll let me take time off if I need to. No takers tonight?”

“What? Oh. No. I imagine some of them will step up.” He rubbed the back of his neck, his expression turning sheepish. “I’d just like to get to know you.”

Shannon blinked. Was he…did he just hit on her? “Um…”

“If that was out of line, I’ll apologize.” His cheeks were flaming once again. “I’m sorry.”

“Yeah. My dad is six weeks younger than my mom. People often ask if he’s her son. She’s not as amused by it as he is.” Fraiser tucked his hands into the pockets of his khakis.

Shannon’s heart pounded, blood thundered in her ears. Was she really going to do this? “If you’re sure it’s okay, I wouldn’t be opposed to coffee sometime. I can leave the girls with my parents.”

She drew in a deep breath and nodded. “Really. Let me give you my number.” 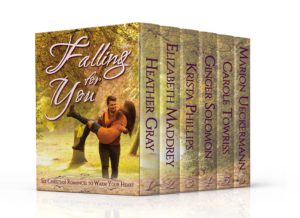 I hope that piques your interest some and that you’ll check out the Falling for You box!