Things are not always what they seem.

Case in point? The frog in the water.  Sure, he’s a cool kick-backed frog with stylish shades on.  I won’t argue that, but I will tell you that beneath his floating green body, he’s also a pool thermometer.  The thermometer extends roughly six inches below his body.  Depending on the angle of the sun as you stand next to the pool, though, you can’t see the thermometer at all, in which case he remains nothing more than a trendy floating frog.

Or the hedgehog.  Adorable, right?  What you can’t see is that, on his other side, he has a big gaping hole.  This poor hedgehog fell victim to self-embowelment by way of snapping tarp.  He should have known better than to help hold the tarp down during high winds.

In case you haven’t already figured it out – we recently traveled somewhere that had an outdoor pool and beach access.  (We made good use of both, too!) 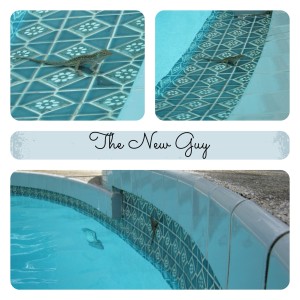 Here’s one of my favorites.  We named this little guy TNG (The New Guy) because he arrived toward the end of our stay.  It looks like he’s standing there, right?  He’s not, though.  He’s clinging for dear life to the inside of the pool.

Are looks deceiving?  Of course they are!

When we take that idea and focus it in on every day life, though, what do we come up with?

Are you ready for it?  I’m chock full of originality on this one, so be prepared.  You might even want to sit down.  Okay, here it comes…

People aren’t always what they appear to be.

Years ago I was in a Sunday School class, and the teacher asked what tools Satan uses to distract people from God’s work.  I was fairly new at that church, and I raised my hand timidly.  I was sitting at the back of the small country sanctuary.  The teacher called on me, and I opened my mouth.  “I think believers often get distracted with the end times.  People can spend some much time worrying about what’s going to happen in the end that they forget to serve God in the here and now.”

Every head in that sanctuary swiveled to look at me.  Not before I answered, like you’d expect, but after.  In uniform, their eyes all said one thing:  heathen.  How could my perfectly legitimate answer elicit such a reaction?  A short time later, as the sermon began and a slide was put up on the screen at the front of the sanctuary, I understood.  That day’s sermon topic?  Armageddon.  I should have seen that one coming.

Fast forward several years.  My family and I were visiting a church.  The people were new to us, and we were new to them.  On that particular day, we had a substitute teacher in our Sunday School class.  He kept looking at me expectantly (or so it felt).  Granted, he was looking at the other class members, too.  I wasn’t being singled out.   Nonetheless, it seemed like he wanted me to speak up and say something during class.  There were times when it felt like he was letting a pause dangle too long, waiting for me to jump in and fill it.

I left the room at the end of the lesson, and as I’m often wont to do, I wondered.  (Wild imaginings are a career hazard.)

Does he question whether or not I’m saved because I didn’t contribute to the discussion?

I hope he’s not judging me based on my silence.

The truth is, I’m more talkative than I should be in class.  By the same measure, it takes me a while to get to know people and feel comfortable enough around them to get chatty.  I also try to filter what I say in any kind of a classroom setting.  Do I want to say this because it will make me feel better to have said it or because I believe it will add value to the conversation?  Is this on my mind because God wants to talk to me about it or because He wants me to share it?

On that particular day with the Sunday School substitute, I can tell you the lesson was fantastic.  I enjoyed his teaching, and he brought to light some things I’d not considered before.  The class was well worth my time and attendance.  I just didn’t have anything to say.  Yet I couldn’t help but wonder if he’d jumped to a conclusion about me based on my silence.  Silly to let myself get caught up in such things, but there you  have it.

Frogs, Geckos, and Hedgehogs – Oh My!

So now we’ve talked about frogs, geckos, hedgehogs, and two ways to get people’s attention – by speaking up and by remaining silent.  What’s the moral of my rambling story?

Things aren’t always what they seem.

I’m no more a heathen for saying people get distracted with end times than I am for remaining silent during a discussion of Ephesians, and neither of the impressions I made in those two settings are wholly indicative of who I am.

Whether in life or in fiction – men and women aren’t always who we think they are at first glance.  Sometimes quiet people are shy, but other times they’re simply observing and waiting for the right time to speak.  Sometimes loud people are outgoing, and yet they could also be insecure and frightened while doing their best to hide it – from others and from themselves.

It’s part of the great mystery of life.  We don’t have God’s ability to see into the heart and know another person’s motives.  We have to invest the time to get to know them before we can understand the nuances of their personality.  Time is a precious commodity, though.  We often find that time can be a painful or difficult investment to make, especially in people who may well disappoint us in the future, leaving us to feel our investment is a waste.

It’s not, though.  The only time wasted is the time we spend going against what God has asked us to do.  The time we spend in obedience?  It’s always a good investment, even if it doesn’t turn out the way we think it should.

As for how this ties into romantic fiction?  It’s another career hazard.  I’m working on a story.  Every time the heroine looks into the hero’s eyes, she sees Christ reflected in him.  When she steps back and looks at the whole package, though, she becomes judgmental and even a bit fearful of him.  He doesn’t have your typical Christian appearance, and the way he looks is contrary to everything she was raised to believe a good Christian looks like. 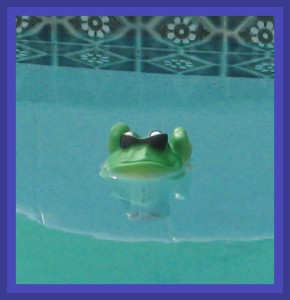 This hero is a lot like the frog in the pool.  Ignore for a minute that you can see the thermometer in this photo and pretend you’re standing on the side of the pool.  With the sun reflecting off the water and turning it into a sheet of mirrored glass, the thermometer would be completely hidden from your view.  This little guy would be nothing more than a floating frog killing time in the pool.  What can be seen doesn’t tell you much about what’s really going on beneath the surface.

Writing this particular hero has challenged me to face some of my own judgmental tendencies.  God is stretching me through this story, and it’s not always comfortable, but the end result (in me and hopefully in the book, too!) will be worth it.

I’m wishing you a blessed day of investing your time according to God’s will and remembering that things – and people – aren’t always what they seem.