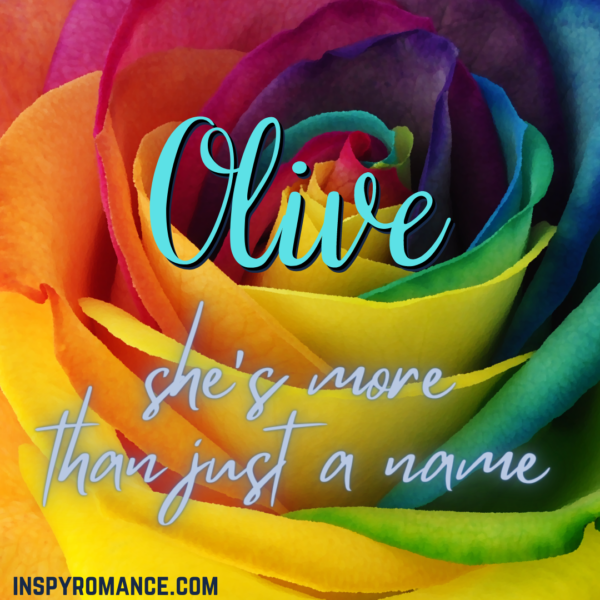 If you’ve read Skye (Rainbow Falls Book One), you might remember how it ended.

The guy gets the girl, and the girl gets the guy. (What can I say? It’s romance.)

The closing line – just in case you didn’t absolutely memorize it (what were you thinking?) – is:

Rainbow Falls would always be the place where life was meant to be lived in full color and where hope was filled with every shade of the rainbow.

Rainbow Falls is just at town. On the surface, it shouldn’t be all that special. Rainbow Falls, though, is a town full of people, and people are spectacular and interesting. People are full of – and often motivated by – emotion, passion, and pain.

Book Two, Olive, will be out soonish. (I told someone April 35th, but they didn’t seem to believe me about that being an actual date on the calendar. Go figure!) In any event, I gave you a little peek last month into the mind of Damien, the hero. This month, I thought I’d focus on Olive.

With a name like Olive Green, you’re going to develop a few idiosyncrasies. That’s just life.

Olive’s name might be drab, but she most definitely is not. For starters, you’ll never catch her in a dull color. She’s all about big and bright and bold – from her electric blue muscle car to the pinks, purples, and other colors she likes to try out in her hair – Olive doesn’t do drab.

Despite her attempts to break out and be herself, there are a few drawbacks to growing up in a tight-knit community. Here’s a little flashback that Olive is having to the good old days… 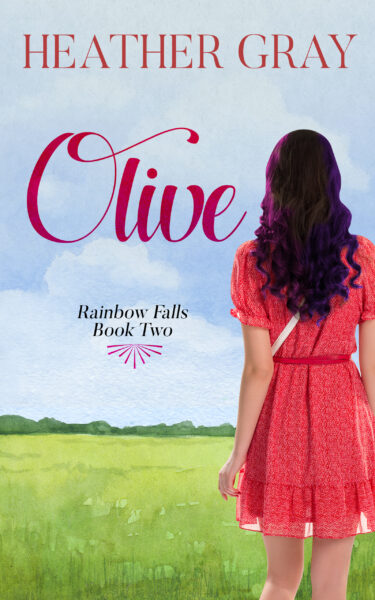 It was like that time in the tenth grade when Asher McElvoy, the boy she’d had a crush on, had sat with her at lunch, but it’d turned out that he was only sitting with her to try to get information about whether or not Ruby Rhed had been dating anyone.

Nah. She hadn’t been jealous of Ruby then, and she wasn’t jealous now.

If not jealousy, though, then what?

Maybe. She had certainly envied the attention that Ruby had garnered from the boys in high school. She’d always wished just a little bit that some of that attention would have been sent her way. She was splitting hairs to make herself feel better, though. Jealousy, envy, whatever. She’d wanted what she couldn’t have, and she’d let herself get twisted up about it.

Over two years after that incident with Asher McElvoy, she and Ruby had ended up in the bathroom together during their senior prom. Olive was attending stag, and Ruby had come with one of the football players, but he’d already gotten drunk and started hitting on other girls, so she’d been understandably peeved. As they’d freshened up their lipstick, Ruby had looked in the mirror at Olive and confessed. “I’ve always envied the fact that you don’t feel like you need a guy to make you complete.”

Olive’s jaw had nearly hit the floor, a definite sanitary concern, given the nature of the girl’s bathroom and the reality of punch that was way more spiked than it should have been.

Ruby had grimaced and shrugged a single shoulder. “You know who you are. You don’t need anyone else to validate that for you. You’re just so…hardcore, but in a good way.”

“I’d go out with a guy if one would just ask me. It’s not like I’m beating them off with a stick.”

Ruby had laughed at that. “No guy in this school is coming within striking distance. You have to know that.”

“Why not? Did someone spread some sort of horrible rumor about me? My dating life is so barren, it makes the Sahara Desert look like the Amazon Jungle.”

Lipstick appropriately touched up, Ruby had turned and leaned back against the bathroom counter. “Do you really not know?”

“Know what?” What on earth was her friend talking about?

“No guy is coming anywhere near you. Forrest has spent the last four years scaring away every boy who even looked at one of you girls sideways, and don’t get me started on your dad.”

Olive choked. “Forrest did what? And my dad? What about my dad?”

Ruby had to wait for her laughter to settle before she could answer. “He’s the only mechanic in town. Any guy in this town who wants to get his car worked on has one choice, and none of them dares mess that up by chasing after one of Mr. Green’s girls.”

“Forrest and my dad have been scaring men away?”

“I wouldn’t say men, exactly. Boys. Almost-men. You know, like the kind who take a girl to prom, drink too much punch, and then decide every other girl out there is more attractive than the one he brought with him to begin with.” 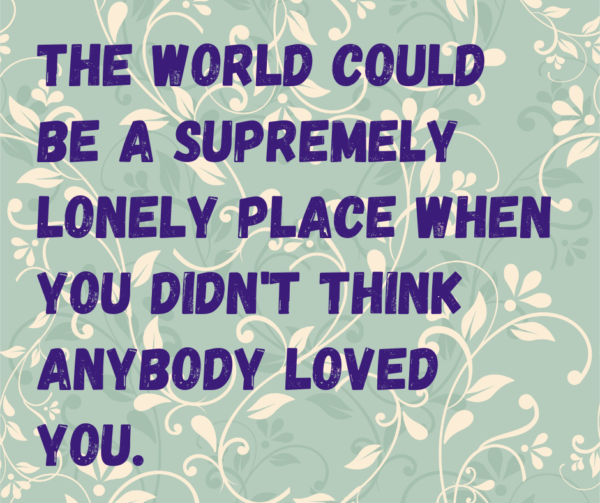 Olive shook her head to clear the memory. She’d spent that entire summer angry at her brother and dad for ruining her social life. It hadn’t taken more than a couple weeks at college, though, for her to realize what a gift they’d given her. So many of the girls she’d met, including her freshman roommate, would have given anything to have a dad or brother looking out for them. Through her friends, Olive had discovered that the world could be a supremely lonely place when you didn’t think anybody loved you. She’d realized how blessed she was, despite her mom’s death, to be so indelibly loved by the family with which God had blessed her.

She wouldn’t give any of them away or trade any of them in, not even if it meant going back in time and having a more active social life in high school. It might have seemed like a big deal at the time, but in the whole scheme of things, those four years had been nothing.

Of course, Olive’s all grown up now, and her social life is about to take a turn nobody in their right mind would have predicted. It’s going to be a wild ride, and I hope you’ll join me for it!

**GIVEAWAY – Comment below. One commentator will be randomly selected to win a $5 Amazon gift card.**