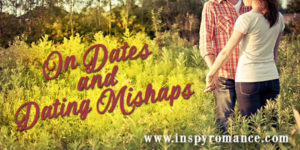 I’ve been plotting a new Madison Creek story. (In the back of my mind- since I’m busy with some other projects- and I could use some help.)

So today, let’s talk dates. And not-so-great dates. This new story will have a few dating “mistakes.”

You might be thinking, I’m married and I don’t do dates anymore. Well, I’m here to say that even with a seasoned married couple, dates are essential. Why? Because there’s something about taking time out of hectic day-to-day to go somewhere special and be reminded why you fell in love in the first place. Dates do that.

My husband and I are about to celebrate our 30th anniversary and we still make time to go out on dates at least once a month. Dinner and movies, listening to live music, exploring the historical districts in the towns surrounding us…things like that.

Not all our dates are great ones. Sometimes we pick a restaurant that’s disgusting, at best. Or catching a movie that’s so boring we both fall asleep. Ha. It’s happened. Only to be rudely awakened by the climactic explosions or fiery gun chases at the end.

I’m hoping you’ll help me out with a few possible ideas. First, I’ll share one of our date mishaps.

It was supposed to be a birthday surprise kind of date. Mr. Castle drove over to the next town where there’s a great shopping area in their historical district. After walking around a bit, with him constantly checking his phone clock (which he never does), he started leading us toward the old-timey train station that connects to the stockyards in Fort Worth. (Another historical shopping district). Mr. Castle was all excited and rushing me along, so I knew something was up. But had no clue what he’d planned.

I’ve wanted to ride this train for some time. As he walked up to the ticket booth, my eyes grew wider. The sneak had already purchased tickets and had the whole evening planned. (People, he’s not a planner, but this time he’d stepped out of his comfort zone and organized everything right under my nose!)

But unfortunately, the train, being old, broke down. Something that happened often as of late.

Ah, poor guy was disappointed, but I was so touched he’d set all that up for me. I wasn’t even upset at all. I felt special and loved and that’s the point of keeping the dates going.

I’m going to toss this in, if you’re not married, meeting friends for a special date is important, too. And don’t forget to take your kids out on dates. Teach them while they’re young what it means to be valued and respected.

So, how about you? Want to help me out by sharing a dating mishap? I might use some version of what you share in my story. If you post a story, I’m assuming it’s up for grabs. Or, if you don’t have any mishaps, share your favorite kind of date. What do you like to do? Or go?

Thanks for your help! And get to planning your next date and who you’ll go out with. It’s fun!