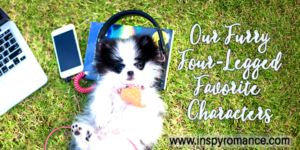 I’ve always been a dog lover and grew up having a wagging tailed friend following me around. There’s something about teaching a child to care for something besides themselves, that I think brings out the compassion in them.

Well, this was the theory I went with while raising my own kids.

I’ve noticed that Hallmark movies almost always have some kind of furry character. Dogs, of course, but I’ve seen llamas, donkeys, horses, and even goats. Did I miss any? (I’m talking to you Hallmark lovers out there.) Ha! 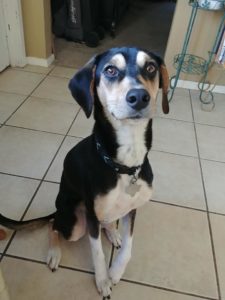 I’ve added my own cast of four-legged friends in my books, too.

<—(Yes, I’m taking this opportunity to show off my little buddy, Banjo. Isn’t he a handsome fellow?)

Madison Creek Bed & Breakfast has ol’ Wally who loves chasing his ball and is always willing to cuddle up when needed.

The Lavender Vale Farm three book series has several animals. There’s the ornery goose that snaps at everyone. That character was inspired by a similar goose at one of the walking parks I frequent. I make sure to avoid that beaked beast! I added the goats because I love watching baby goat videos.  Chase’s dog Ginger was actually inspired by my own little cocker-mix by the same name.

My Ginger was tough and didn’t like any critters invading her yard. Whenever we went out somewhere, she’d greet us at the big bay window by the backdoor when we came home with a happy wave of her paw. True story. 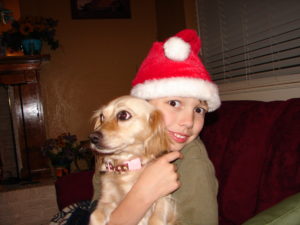 After Ginger crossed the rainbow bridge, I just had to put her in a story. She was one of our special sweeties. (picture is of  my son when he was much, much younger and his girl, Ginger.)

In my lastest Grimwood Legacy series, there’s a reef shark named Murphy… and a mermaid, but I’ll have to talk more about that next time.

Do you enjoy reading books with animals?

Do you have any favorite literary animal heroes?

Leave a comment below with your thoughts and I’ll pick a winner for a $5 Amazon gift card. Maybe you can go buy your favorite book that has animals in it. =) 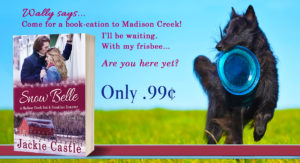