People sometimes ask, where do your stories come from? That’s the million dollar question, because more often than not, we really don’t know. I  like to call myself a Story Catcher. The ideas come tumbling in like leaves caught in a brisk wind. I try to catch the ones I can, write them down, then bring them to life. Each one is like a little gift.

My newest book, Sun Kisses sprang from a sermon. Well, I actually had the idea churning in my mind about a woman who finally gets what she’s been praying for, but there were some loose ends that weren’t binding together. Then I heard the sermon that tied my plot and purpose all together.

The pastor told the story about Elijah when he was fleeing from some evil queen (sounds like something out of a storybook, doesn’t it?) He flees into the wilderness where God provides for him: food and water until it’s time for him to move on. I knew the story says that he was fed by the ravens. What I never realized was that it was ravens that fed him. That had never really sank in as it did that Sunday morning.

I don’t even want to think what type of food they brought him. But the cuisine never deterred ol’ Elijah. He ate whatever they brought him and drank from that stream, and waited on God.

This got me to thinking about how many times God has brought provision and I was left scratching my head and wondering if it wasn’t some kind of joke He was playing on me. Thing is, God might have a sense of humor, but he’s not mean, or cruel.

And from that, the purpose of my story hit me. The when God answers, but not in a way you anticipate: do we look at it like a blessing or joke?

If you’re wondering how all that ties together, I’ve put Sun Kisses: Madison Creek Bed & Breakfast on pre-order at .99¢, but only for a short time before it returns to the normal series price. Here’s a bit about the book. 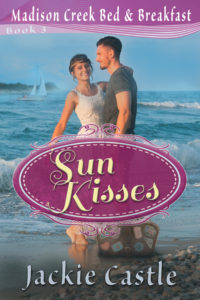 History drew them together and then threatened to tear them apart.

Despite her attempt to portray a woman in control, Karen Borgman’s life is a mess. Living with an uncaring, unfaithful husband had been bad enough, but his death sent her life into a humiliating tailspin.

Only her fight to revive for her town, Madison Creek, and sharing its deep history with tourist kept her sane. When history professor, Kevin Fairbanks, sailed into her life, Karen’s hope of a life with a good man is ignited. What could go wrong?

But when her heart’s desire, a desire she could never attain on her own, is dropped on her doorstep, her reputation and relationship with Kevin are threatened.

Oh, and what’s up with Haley and Ethan? As Ethan’s new business venture grows, his time for Haley shrinks until they are like two passing ships blown and tossed in a stormy sea of busyness.

Another heartwarming story from Madison Creek Bed and Breakfast and the characters you’ve grown to love.