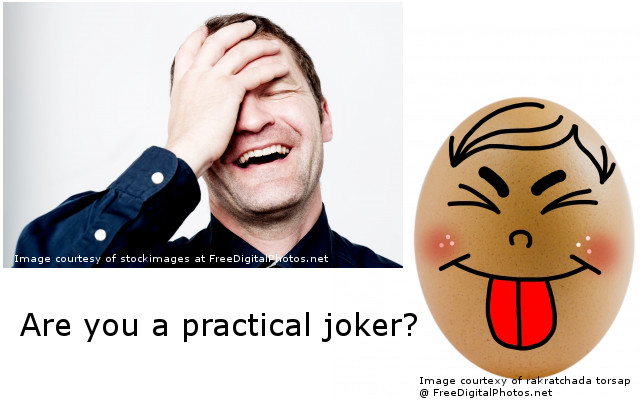 It being April 1st, I figured that I probably needed to go ahead and acknowledge the day for what it is: April Fool’s Day. I spent a few minutes poking around the Internet to see if April Fool’s Day was a purely American thing or if it was more widespread. Thankfully, we’re not alone in enjoying a day to poke fun at others as the day seems to be fairly widespread.

I’ll admit, I’m not much of a practical joker. I jump out from behind something and yell “boo!” with the best of them, but other than that, I’m relatively useless at such things. I recall when I was eight or so, my sister and I tried to play an April Fool’s joke on my mom by making her pistachio pudding (her favorite) and serving guacamole instead. But she loved guacamole, so it really wasn’t a joke past that first bite when it wasn’t sweet like she imagined. (And looking back now, she had to know, because the colors really aren’t anywhere close to one another.)

In college, my suite and one of the suites on our brother floor got into a bit of a practical joke contest. They filled our rooms with balloons. We used string to create a spider web all throughout their rooms, including tying the doors tightly enough that they couldn’t be opened. They pennied our bathroom door shut. And so on, and so forth. It was fun, but the ideas were never mine to start.

My husband, on the other hand, is a bit of a joker. (Lucky for him, I’m a good sport!) We have cardboard cutouts of Hugh (formerly third of five on Star Trek the Next Generation. That’s right. A Borg.) and Captain Kirk. When we were first married, it wasn’t a rare thing to pull back the shower curtain and be greeted by one or the other. Open the pantry? Kirk staring at you. Walk down the hall in the dark? See the slightly glowy eye of the Borg watching you. I think he finally got tired of hearing me scream, because the last time we moved they never made it out of their box.

Lately, I usually leave my enjoyment of April 1st with a quick scan of whatever Google has done for their practical joke – they’re usually amusing, clever, and fun. And so far I haven’t had to worry about the kids serving me something inedible. I feel like I should bring this back around to writing in some kind of clever way, but I’m drawing a blank on how to do that. So instead, I leave you with a little snapshot of my life and a question: what’s the best practical joke you’ve ever pulled or had pulled on you?