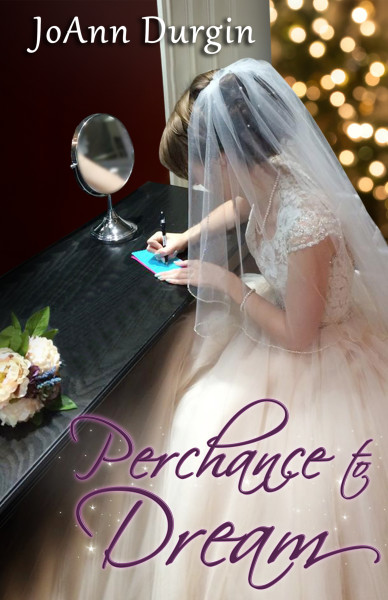 Readers often ask me, “How do you come up with such pretty, unique book covers?” Creating a book cover is one of my favorite aspects of writing a new story. I like having the cover done as I’m writing. It inspires me and keeps me going in many respects.

The first consideration for any book cover is that it fits the book–meaning that what’s on the cover is an accurate portrayal of what’s between the front and back covers.

For my upcoming release later this month, Perchance to Dream, I did something different and quite exciting for me personally. I’ve always wanted to write a bridal novel. Combine that idea with the holiday season, and the idea was born! Next, I needed to find a photo. I searched the Internet stock photo websites, but although I found a few possibilities, nothing struck my fancy. In the meantime, one of my faithful readers posted wedding photos on Facebook from her daughter’s wedding this past year. One photo, in particular, showed her daughter sitting at a desk and writing on notecards. Wow! The photo was gorgeous and told a story in itself. I love the bride’s gown; she looks like a beautiful princess. I love the simple elegance of her gown, the fact that you can’t see her face, and the understated pearls she wore on her wedding day. The full (blush-colored) skirt of her gown is spectacular and I knew it would be the perfect “backdrop” for the book’s title.

My mind was reeling with story ideas with my first glimpse of that photo. Then I discovered my reader took that photo instead of the official wedding photographer. I wrote and asked for my reader’s permission to use and alter her photo for purposes of an ebook release. She and her daughter both signed official releases for me to use the photo and the images. Now, to start on the actual cover. The fun begins!

Let me start with the original photo (shown below). I hired a new cover designer (who has since designed the remainder of the covers for my Lewis Legacy Series). Obviously, I like his work, and we work well together (a crucial component of the process). He “gets” me and shares my vision for different and innovative book covers. The series of photos will show you the progression of the book cover for Perchance to Dream. 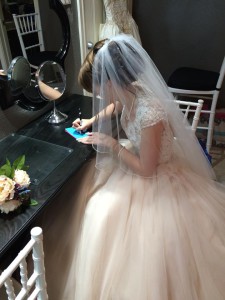 Note how this original photo shows another fancy gown hanging on the door behind the bride. That is distracting (for a book cover) and takes the focus away from her beautiful hairdo and veil. Ditto the silver door lock. The photo has chairs in the foreground and background (and one is also reflected in the large mirror on the wall). There is a plastic square blotter on the desk and–if you look closely–there is a dark-colored ponytail elastic on the desk. The photo, as is, was much too “busy” for a book cover. So, the first step was to strip the photo of all the extraneous elements.

The next step was to make the cover look a bit more like a holiday novel. The best way I could do this–without 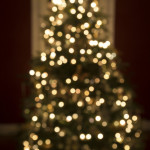 the distraction of too much additional color–was by using a blurred photo of a Christmas tree with only white/yellow/gold lights. I knew it would look best to fill in the dark corner behind the bride. So, the addition of the Christmas tree fulfilled important goals for this book cover.

The next section of photos will show you the gradual progression of the Perchance to Dream book cover as I worked with my cover designer. In essence, I asked him to strip the photo of the all those extraneous elements mentioned above. I had him remove the reflection of the bride’s arm in the small mirror. However, it looked too strange without it (see below). He’d also removed the door, but I asked to restore that element (but remove the silver door lock).

Once we were satisfied with the basic photo, we began to work on placing my name and the book title. For my  name, we used the same font I’ve used for the past few book covers. For the book title, the designer first used a red font (for Christmas), and then he chose a lighter shade of purple. I chose not to use either of those fonts or colors. For the final cover’s title, I chose my preferred usual font we use for my Lewis Legacy Series in a deep plum color (not overtly “Christmas” and more in keeping with the floral bouquet on the desk). The last step in creating the cover was the addition of the whimsical sparkles on the bride’s gown. I love the final cover and trust that you do, too! 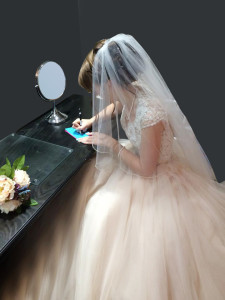 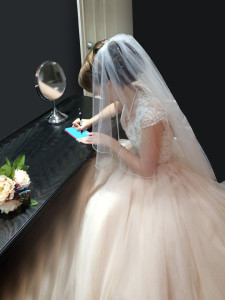 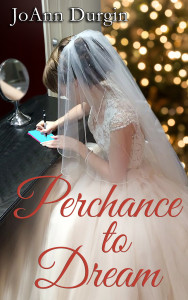 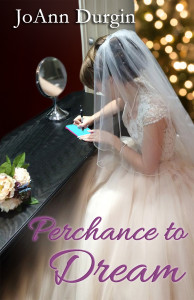 I hope this has given you a good idea of the creative process involved in creating a book cover. This cover was much more involved than many of my other covers, but again, it is uniquely special since one of my faithful readers took this photo of her own daughter on her wedding day. You can’t place a value on something like that. I am indeed grateful they both gave me their permission to use these images and pray they–and you, dear readers–will enjoy Perchance to Dream. To God be all the glory!