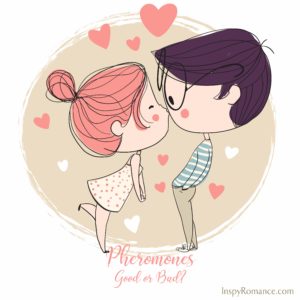 We’ve all heard about the fascinating chemical secreted by animals (and humans too). Pheromones act as a signal to attract males and females to each other, and as romance readers, we’ve seen them at work between the pages of the love stories we so enjoy.

But pheromones don’t only induce feelings of love and flitting through the daisies. Oh no, there’s a beastly side to them too, which we discovered last weekend.

On Tuesday a week ago, I drove to my sister’s farm. She had undergone a total knee replacement, and I offered to help during her recovery.

The farm has been a wonderful writing retreat for me during this time—I even managed to finish writing my latest book which releases March 26th). Unless my sister needs something, there are no distractions.

Except for her puzzles. 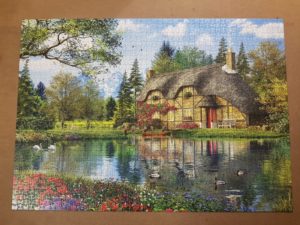 Spotting the half-built 2000 piece on her dining room table, I told myself not to even glance at it. But guess what? I looked and subsequently lost over two days of precious writing time. On the flip side, I managed to finish the beautiful Cotswold-type scene.

Last Friday I was building the puzzle when I heard a commotion at the dining room door. I thought the dogs had been let out. My brother-in-law, Danie, came to see what was happening and discovered that the bees living in the roof on the other side of his house were swarming at the door and stinging his daughter’s dog. While he tried to get the dog to their home next door, getting stung in the process, my sister shouted from the kitchen that their big Rottweilers were being attacked by the bees at the kitchen door.

We quickly let the two dogs inside, and they brought with them about a hundred bees, clinging to their coats.

And the dogs ran to US for cover!

Soon, bees buzzed in our hair and stung through our clothes. I needed to kill the bees on the dogs, but was too afraid to swat them in case the dogs turned on me. Instead, I hit the air wildly with a fly swatter—which only served to anger the bees more—squealing every time one nabbed me.

Now I don’t do insect sprays. At all. I even avoid picking up a tin of the stuff. But when Danie turned the can of repellent on me and the dogs, I didn’t protest. Anything to stop the buzzing and the stinging. Finally, I hightailed it down the passage and hopped beneath a running shower, clothes and all.

The final nab count was: me, eight—my wrist, back, and legs; my sister, two; and I’m not sure how many Danie got, but it was way more than me. And he’s allergic to bee stings!

With the interior bee problem semi-resolved, we now faced another problem—finding medication to counteract any allergic reactions. I was so concerned because if Danie went into anaphylactic shock (a real possibility as he was allergic, and I didn’t know HOW allergic), I was in BIG trouble. The nearest hospital is fifty minutes away, and we were being held hostage by crazy bees. They swarmed around every door, waiting for someone or something to appear. It was like a scene out of a Hitchcock movie, as if they KNEW we were inside.

Finally, we managed to find antihistamine tablets. Danie got a double dose. 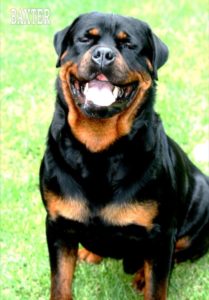 Now Baxter, their prize Rottweiler, was in another fenced off part of the garden. And it was impossible for anyone to get out the house to see if he was all right. When the sun had almost set and the bees calmed somewhat, Danie went looking for Baxter. Darkness set and he had to give up the search. The next morning, Baxter was found dead in the garden. He’d jumped the fence, and the bees had chased him.

We managed to find a local beekeeper who came out that Saturday night. Three men worked tirelessly for five hours under the cloak of night with only the small lights attached to their heads, to remove most of the enormous hive and bees. 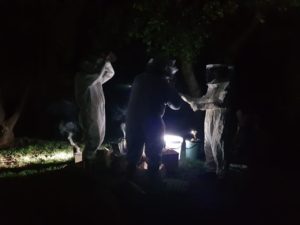 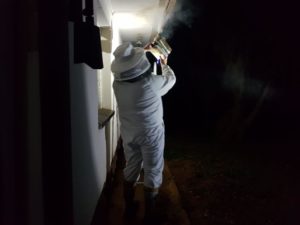 Two days later, when I wrote this blog, we were still under “house arrest”, the remaining bees still unsettled. It was almost impossible to go outside without being chased by the tiny insects. Who would think that such small, industrious creatures, who produce such sweet nectar, could create so much havoc?

I live in South Africa, and Africanized bees are way more defensive than another other bee species. The African honeybee reacts to disturbances faster. They can chase a person a quarter of a mile. They kill, victims receiving ten times more stings than from European honeybees. And while their venom is no more dangerous than regular honeybees, they do attack in greater numbers.

Why did the bees go crazy on the farm last weekend? Who knows? Explanations range from the excessive heat to queenlessness to nectar dearth and robbing. I suspect the latter. It is with the robbing of hives by other bees that an alarm pheromone is released, making the bees aggressive. Then any man and his dog are fair game, as we found out.

So, give me the pheromones on paper any day—those sweet romantic feelings that happen when boy meets girl—to this awful experience. But, like any good or bad experiences in my life, I’ll not let this one go to waste. There will definitely be a beekeeper hero (or heroine) in one of my future stories.

Out of interest, I did a search under Romance and Christian Romance books on Amazon for “bees”. I was pleasantly surprised to see several titles pop up. How to Charm a Beekeeper’s Heart by inspirational romance author Candice Sue Patterson caught my eye. I think I’ll need to download that to my Kindle sometime soon. 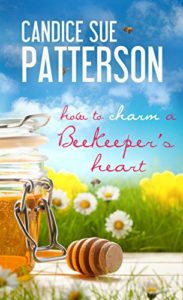 My book, A Hero for Heather, sports a hero with a bee sting allergy. Have you read any romances that revolve around bees, or have the word bee in the title?

I’ll be giving away an e-copy of A Hero for Heather to one person who comments on this post by next Friday, March 8th. Winner to be announced on Sunday, March 10th. 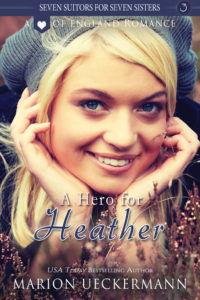