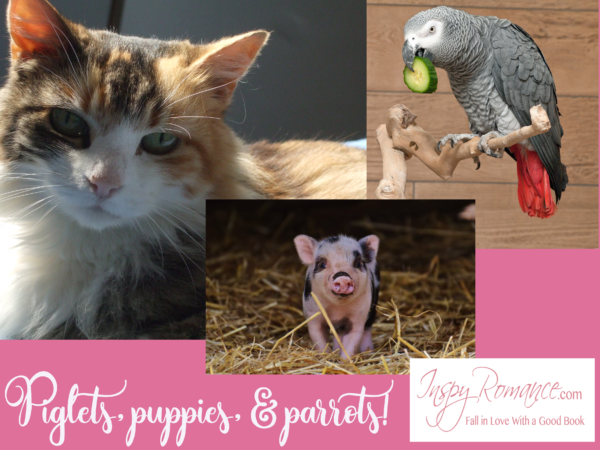 I’ve lived with pets almost all my life, and loved every one of them. Chickens, cats, dogs, and mice growing up. Chickens, cats, and dogs for many years when I lived in Australia before coming to England and getting married. Since being married, we’ve shared our home with cats, a rabbit, and guinea pigs. My husband would love a dog, and I’d love a big enough yard to keep chickens again. You may be noticing a pattern here!

I love animals, and am perpetually amazed and awed by God’s incredible creativity! He has a plan and a purpose for everything. In real life, and in stories animals often play big roles in either bringing a couple together or pushing them apart! From the meeting while each walking their dog, to the cat who bites and claws the heroine’s date if it disapproves her choice, to the bird lover whose home is like an aviary falling for someone with a feather allergy.

Yet for some reason, I haven’t written many stories including animals. Less than half my stories have even a brief appearance of a pet.

Catriona’s border collie Hector makes a brief appearance in A Model Bride, and plays a bigger role in More than Friends. In Love’s Healing Touch the hero’s mom has an aged Labrador, and also a temperamental ginger cat who I mentioned once then forgot to write into any scenes (oops!). In Imperfectly Proverbs 31, the heroine is caring for her twin nieces for the summer, along with their enthusiastically accident-prone Newfoundland dog, Bear. He’s the catalyst (dog-alyst?) for keeping Samantha and Daniel together long enough to fall in love.

And then in His Father’s Son, Anna and Luke have a son whose pet is an adorable piglet. I got the idea for the pig in this story when my husband went the garden centre to buy some gravel for our paths, and nearly gave home with a miniature piglet very like the one in the picture above!

Unfortunately the piglet in the story may grow a teensy bit too big for a skinny twelve-year old stuck in a wheelchair to manage as an indoor pet, but as a smart kid who loves his pig, Josh has plans for that. Though his mom might not quite agree with all Josh’s plans… especially the bit about her marrying his estranged dad so he can move in with them…

Anna has too much history and too many unforgiven hurts for that to ever happen. But as we so often find in our own lives, God has other, better plans!

God brings Luke home when Anna and their son Josh need him most, and also when he’s mature enough to work at creating a committed relationship. Though clearly, at the start of the story, God is still working on Anna – and Luke too. I love the way this couple finally allow Him to heal their past traumas and deep-buried hurts so they can commit to a lifetime together.

Originally published in the Cherish boxed set, His Father’s Son will release as a solo ebook on February 12, and is on preorder now, priced at just 99c until February 19. It will also be available to borrow in Kindle Unlimited.

And my next story, Dolce Vita (Sweet Life) Book #8 in A Tuscan Legacy, the multi-author series releasing from April you may have already read about on Saturday, will also have a less-than-usual pet in it. You’ll get to meet Henry, a very noisy parrot who loves to tease the little tortoiseshell cat, Pickles, and also has a habit of biting people he doesn’t like.

Pickles is based on a cat who lived with us for too short a time, and Henry is inspired by my niece’s African Grey parrot, who I’ve never met but who sounds quite a character! They’re also in the image above. Pickles is adorable, but I’m not so sure about that wicked gleam in Henry’s eye!

Which pets do you prefer – either in real life, or in stories? One comment posted here before January 31 will be randomly chosen to win an ebook copy of His Father’s Son, or your choice of my ebooks.