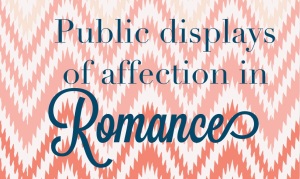 When we think of PDA, it’s hard not to picture brace-faced couples holding hands in the hallways at school or sitting uncomfortably close at the lunch table. Well now that I’ve sufficiently given you a cringe-worthy blast-from-the-past, let me reassure you that’s not the PDA I’m here to talk about today.

I’m here because I want to talk about those moments in fiction that make you melt. The moments that make the chemistry between a hero and heroine seem palpable. The gestures that are the things of sweeping first realizations.

I love them. I’m a sucker for them. But this is also coming from the googly-eyed girl who used to used to make mix tapes to show my affection for people. You’ll see what I mean below.

Here is my absolute, don’t-even-have-to-think-about-it-favorite Display of Affection in a movie, a scene that made this movie one of my favorites of all time.

It’s from 10 Things I Hate About You, which I still adore 15 years later and have to watch often. It’s required. The bad-boy hero, Patrick, is having trouble getting our rebel heroine to open up to him. Plus, he’s just embarrassed her and she’s not speaking to him, so he has to “sacrifice himself on the altar of dignity and even the score.” Swoon.

Honorable Mention: This scene in The Family Man, which gives the hero an It’s a Wonderful Life-like glimpse of what his life would have been like if he’d married his college sweetheart instead of choosing his career over her. After days of living with his would-be family, Jack still gets the impression his wife knows there’s something missing about him. When he finds a video of himself singing to her in front of all of their friends at her birthday party, he realizes exactly what’s missing. The cheesy dimension of love that a cold life on Wall Street has made him incapable of knowing. I love it.

Now it’s time to hear yours. What are your favorite displays of affection in books, movies, or real-life? Or is your love language more…subtle? Sound off in the comments!