Years ago, the principal of my children’s middle school was forced to resign due to health issues. A much younger man replaced him – a snappy dresser with perfect hair and a mixture of confidence and arrogance that was off-putting. He swaggered about with his nose in the air and spoke down to students and parents alike. One day, a few months into his tenure, he emerged from the building to direct after-school traffic. He stabbed his finger in the air to get the busses in line, while he barked orders at the students. There were dozens of parents watching when suddenly, he stepped back onto a tall McDonald’s shake cup. His heel smashed one side and the pink liquid shot up his pant legs and spattered his shiny black shoes.

Time seemed to freeze as he debated what to do, surely aware of how many looked on, trying to squelch their laughter. He could either continue directing traffic and assure the kids got safely onto the right bus, or he could hurry into the building and try to undo some of the damage with cold water and paper towels.

From across the parking lot, I thought I heard him take a deep breath. Then he carefully moved the smashed cup out of the traffic area with the toe of his shoe, and resumed his responsibilities. This earned him a modicum of respect, at least from me. I couldn’t help wondering how it would affect his ego though, or how it would affect those who had to deal with him on a daily basis.

Much to my surprise, he turned into a gentler soul, almost overnight! It was no longer unusual to see him smile, or put a friendly hand on someone’s shoulder.

As a Christian author, I’m always on the lookout for moments when people are humbled by unforeseen circumstances. I like to watch their immediate reaction and study the long-range difference it makes in their attitude. No two people react the same – what makes one bitter makes another one better. Both kinds of characters need to appear in books, giving us an opportunity to think about the way we behave … versus the way we ought to behave. 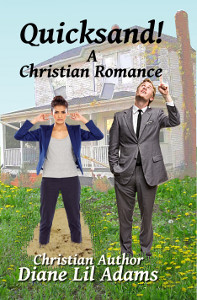 This middle school incident inspired me to write Quicksand! The strawberry shake eventually ended up on the cutting room floor and the principal morphed into a teacher, but the lesson remained. You don’t meet Dan McBride until after he quits his corporate job, but I knew him when he lived in an upscale neighborhood, drove a BMW and treated both friends and acquaintances with disdain. Success wasn’t buying him any happiness though, and he finally realized he’d rather make a difference than a dollar. He quit the job, sold the car, moved into a cheap apartment and went back to school. Simultaneously, he took on a project that was expensive and time consuming, leaving him exhausted and broke.

Emily Dwyer was broke too, but she was used to it. Single-parenting two teenagers and maintaining a house isn’t easy on a teacher’s salary but Emily knows how to make do.

Emily and Dan are attracted to each other like magnets, but Mary Wells, another new teacher, seems determined to keep them apart … though not for the reasons you might think.

Quicksand! was the first book I published so it’s especially dear to my heart. I revisit the characters sometimes and Mary Wells keeps hinting that she’d like to star in her own book. Mary’s kind of arrogant, just like Dan used to be. Wonder how she’ll get her comeuppance? Watch for Quagmire! in about six months, if you want to find out!