I’ll admit it. This post is shameless self-promotion and a testimony of sorts. :)

I’m a fairly new author. I didn’t start writing novel-length fiction until about five years ago. That’s not to say I didn’t write, but most of my writing went into my journal–mostly prayers and a few complaints while homeschooling and raising seven children. A few years ago, I sat at my desk staring at a blank page in my journal. I felt the need to write, but couldn’t put any words down.

Sometime later, I don’t exactly how long. Days tend to blend together at times. Such is the life of a mom. :) Anyway, I woke with this incredible dream, and I just had to write it down. So I did, and it became my first full-length novel. Yep, based on a dream.

My next novel, now published as One Choice, also came as a scene in a dream. An American woman who has made her home in a foreign country is pulled into a centuries old tradition whereby the prince has to find a wife because he’s reached his twenty-fifth birthday without marrying.

Here’s more about One Choice *wink* 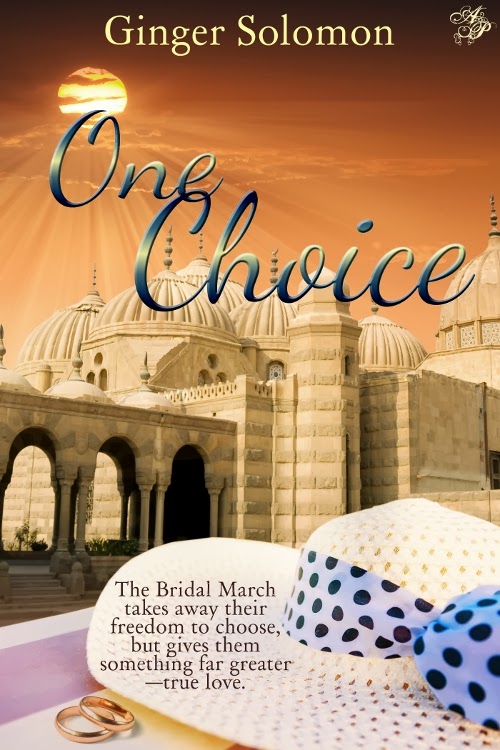 Cahri Michaels is American by birth, but Belikarian by choice. Being selected to participate in the Bridal March forces her to give up the independent life she’s created for herself. She’s not ready to be anyone’s wife, much less to a man she doesn’t know. Prince Josiah Vallis despises the century’s old tradition—the Bridal March—that is forcing him to choose a wife from fifty women. Why does it matter that he’s twenty-five and still single? When Cahri and Josiah meet, passion ignites. Will it spark a godly love that can see them through or will they be burned…. never to be the same?

After One Choice, I went on to write two Scottish historical romances. The first had the best rejection EVER from an editor, who thought I had strong writing, but some plot issues. The second is with an agent–waiting, ever waiting. :)

But a writer, one who’s called, cannot stop writing, even if they aren’t writing a novel. Earlier this year, Jennifer Slattery contacted me and asked if I’d like to participate in a collection called Sweet Freedom A La Mode, due to release in time for Independence Day. I agreed and set out writing a short story, which you can find here: 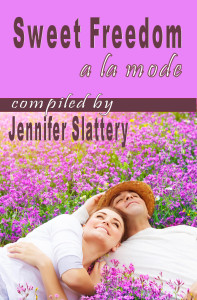 For some, the fourth of July is a celebration of freedom; for others it is a reminder of bondage. Of pain. Of fear. Of hopelessness. But there is a hope that is deeper, a love that is truer, and a freedom that no one can ever snatch away. How can one take a step toward that freedom when the road appears shrouded with insecurities and doubts? These pages contain numerous stories: a woman longing to start again but bound by the failures of her past; a young man who, upon reaching adulthood, must face his fears of death; a woman offered a chance of true love but held back by crippling insecurities. Is God even there? Does He care…enough to reach down and pull these men and women from the messes they’ve landed in, some of them by their own hand? Freedom. Peace-saturated, joy-infusing freedom. We pray our stories demonstrate what it looks like in the day-to-day…and provide a little insight into how one grabs hold of that treasured state of heart and mind.

I have a devotion scheduled to release some time this month called Fear Not! It is a devotional about overcoming fear. I wish I had a cover image to show you or a blurb to share, but they’re not yet available. I will keep you updated. ;)

If you click on the images or book titles, you’ll be taken to Amazon where you can buy both titles. So there’s my shameless self-promotion.

And just in case you didn’t get enough…here’s the prologue from One Choice. Enjoy.

Proverbs 31:10 “Who can find a virtuous and capable wife?”

“Father, must I do this?” Josiah Vallis stood rigid, feet spread in a soldier’s stance, in front of his father’s large, antique oak desk. His hands fisted behind his back as his mind reeled with the humiliation of having to find a wife in this manner.

He had tried, but every woman he’d met, both on his own and those his father had arranged, were money-hungry, power-hungry, unattractive, or all three. The one woman he thought perfect for him had betrayed him. She’d had him fooled, and now he doubted his own judgment when it came to the fairer sex.

He didn’t want a wife just to produce heirs and to hang on his arm like a showpiece. His ideal mate would be much like his mother — a woman who could love him for who God intended him to be, not for his family name and position. His desired wife would be kind and considerate, would care for others more than herself, would be giving, loving, and attractive. Most important to him, and even harder to find, was for his wife to have a personal relationship with God.

He gazed around his father’s immense office. All the furnishings, made of quality materials, were fit for a king. One day it would be his, though he’d never wanted it. As the remaining male heir, he had no choice. He peered back at the man behind the desk.

His father’s eyes, a shade lighter than his own dark brown, moved away from the computer screen with a spark of irritation. He leaned back in the chair. “Yes, Josiah. Stop procrastinating. Write the letter. It must be done today. You have waited until the last possible moment as it is. I expect more from you as a prince of Belikara and the future king.”

“Yes, sir.” He forced himself to relax, uncurling one finger at a time from his balled fist. “What should I write?”

“Josiah.” A familiar growl sounded from his father’s throat, and his hand tightened around the arm of the chair until his knuckles turned white. “Why must you act as though you are still in grade school? Grow up!” He switched back to his work. “Jonathan wouldn’t have given me this much trouble.”

Josiah bristled at the mention of his deceased elder brother. Would he always live in Jonathan’s shadow, never measuring up to his father’s expectations? Why can’t he see me for who I am?

He lowered his head, a disappointment to his father once again, and marched out of the room. The man hadn’t been swayed to postpone this hideous tradition, no matter how hard Josiah pushed.

In his own office, he sat at his mahogany desk and took out several sheets of paper and his favorite writing pen. The white of the paper, surrounded by the desk’s dark wood, glared at him. He glanced up to the verse displayed on the wall. Trust in the Lord with all your heart, and lean not on your own understanding; in all your ways acknowledge Him, and He shall direct your paths.

Despite his need to write the letter, his thoughts wandered to the One he relied on so much. The One who always listened and never compared him to anyone else.

He rested his head in the palms of his hands. “Oh God, how can I go through this… this tradition my father insists on keeping? How can I choose a wife from fifty strangers? How can I write a letter expressing my desires and heart to these women when I struggle with knowing it myself? I ask you to give me the words. Use this letter to prepare the heart of the one you have chosen for me. Help me to know her when I see her. Amen.”

He wrote and crossed out greeting after greeting before deciding on Dear Ladies. Line after line flowed from his pen as he shared his heart for God and what the ladies should expect in the next six months. He also included the warning about rejecting the summons, although he expected they would all be thrilled to become the wife of the future king.

Over an hour later, Josiah completed his task. He reread his words, made a few minor changes, and rewrote it in his neatest handwriting. Satisfied, he set the paper aside.

His head bowed, he prayed again, expressing his gratitude to his heavenly father.

The letter was complete, but would it bring him a woman he could love?