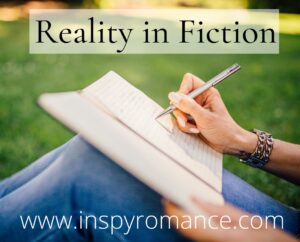 I’ve heard it said that being a friend or family of a writer can be a little unnerving. Something about being afraid they’ll end us as a character.

That’s probably because one of the most well-known pieces of advice for writers is “write what you know.”

So is that really what writers do? Make stories out of their real life experiences?

Of course, I can only speak for myself, but I don’t write my stories based on real life. However, I do tend to take bits of real life and include them in my stories. 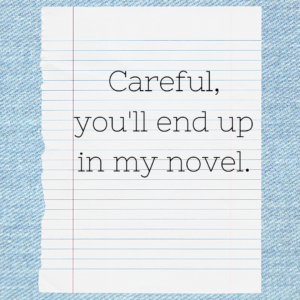 I write small-town Christian romances. Maybe that is “what I know”, but it’s also what I love. My small towns become a character of their own and play a role in the story in a big way because I love the small towns I’ve lived in. But that doesn’t mean that the town I write about is my town. Instead, there are bits and pieces of it that are inspired by many different places.

In my first series, the town of Pine Haven isn’t one particular town. Main Street looks a lot like the tiny town where I went to college. The restaurant “The Depot” is named after a spot near where I grew up, but the inside of it is totally made up. 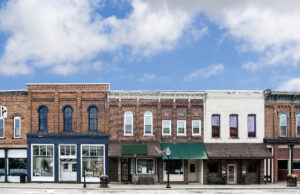 It’s also important to know that if you’re friends with me, you’re not going to end up in my novel (unless you really want to!). But one of my characters may have a quirk that I saw in someone once or might have a favorite saying that I remember from my childhood. Sometimes I include things that have happened to me, but only as a small part of the story. And honestly, I don’t usually plan it. It’s typically things that come up in the character’s conversation. I’m typing away with “he said this” and “she said that,” and the next thing I know they’re telling a story from my life.

I believe using pieces of reality in fiction makes a story more authentic. Memories can be helpful for a writer because if I’ve had that experience I can really dig deep to describe how the character thinks and feels about it. I can have a character accurately describe how he feels after he’s in a car accident that he can’t control. I can tell you the sounds and smells of a southern diner on Saturday morning. I know the pain and agony of a sports injury. I’ve experienced family events with a large family.

So are my books real life stories? No, definitely not. I didn’t meet my husband in college. I didn’t lose my parents and raise my siblings, and I’ve never met a billionaire, or been skiing in Colorado. But I like to think that pieces of me and the people I love make it into my stories in a way that makes them believable. Trust me, there’s still plenty of imagination and made-up stuff in these books!

What do you think? If you were to write a book, would you start with an idea from your real life? Have you ever met someone that you thought would make a perfect book character?

Hannah Jo Abbott is a wife, a mom of four, a homeschool teacher, a daughter, a sister, and a friend. She loves writing stories about life, love, and the grace of God. She finds inspiration and encouragement from reading the stories others share. Hannah lives with her husband and children in Sweet Home Alabama.