Six months ago I blogged on Hope, Redemption, and Second Chances. I wrote about the new Potter’s House multi-author series I was part of and my first book in the series, Restoring Faith.

Two weeks ago I released my second book in this series (which is book 14 in The Potter’s House Books as there are seven authors involved). Recovering Hope was a difficult book to write—the subject matter hit home personally—but oh, all the blood, sweat, and tears (okay, no blood involved) was worth it because readers are loving it.

The Potter’s House books wanted stories in the series with flawed characters in desperate need of hope, redemption, and second chances. A heroine struggling with depression was one of the stories I wanted to write because several women (and some men) in my family suffer from / or have suffered from depression—some closer to home than others. In some ways, Recovering Hope is their story. 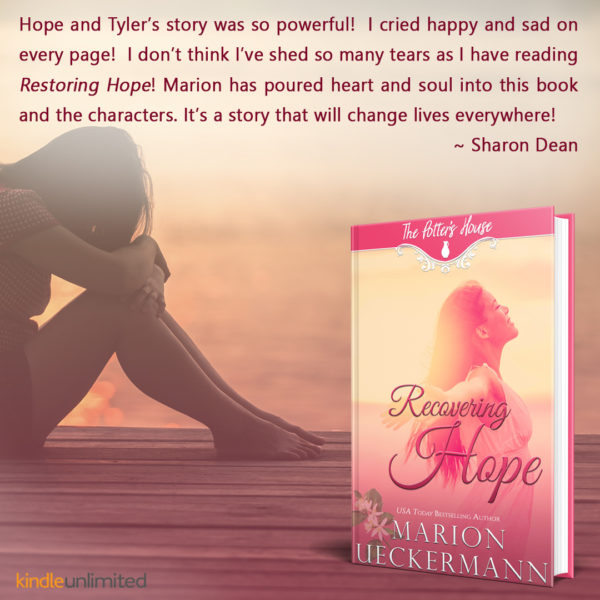 I constantly saw God’s hand guiding me in the shaping and writing of Hope and Tyler’s story. For example, I’d envisaged some of the epilogue quite differently. I had planned to finish writing the book one Friday night, but the final chapter’s last scene took much longer to write. As such, I had to put off writing the epilogue to the Saturday. That night as I tried to fall asleep, the idea I used for the epilogue which gave Tyler the platform he had to bring glory to God through their situation, drifted into my mind, and I knew why writing that epilogue had been delayed. There were other God-instances in my writing process.

One of my beta readers had this to say about Recovering Hope:  “This author takes a highly sensitive subject and bares the recovery process for all to see. She did not shy away from the tough moments, and I truly believe that this book will help women in their healing process.”

I hope you’ll grab a cup of coffee, a box of tissues, and snuggle up on your couch (or bed) to read Recovering Hope. I’ll be giving away an ecopy of Recovering Hope to three readers who comment on this blog.

In a single moment, a dream dies, and hope is lost.

Lovers of the ocean, Hope and Tyler Peterson long for the day they can dip their little one’s feet into its clear blue waters and pass on their passion for the sea.

Despite dedicating her life to the rescue and rehabilitation of God’s sea creatures, when their dream dies, Hope can’t muster the strength to do the same for herself. Give her a dark hole to hide away from the world and she’d be happy…if happiness were ever again within her reach.

While Tyler is able to design technology that probes the mysteries of the deep, he’s at a loss to find a way to help Hope surface from the darkness that has dragged her into its abyss. He struggles to plan for their future when his wife can barely cope with the here and now.

If they can’t recover hope, their marriage won’t survive.