A few days after Thanksgiving, my husband had the chance to take a two-hour shift and ring the bell for the Salvation Army and stand watch over a kettle outside Walmart.

The fun part was, he dressed as Santa, and even more fun was seeing reactions of children of all ages. 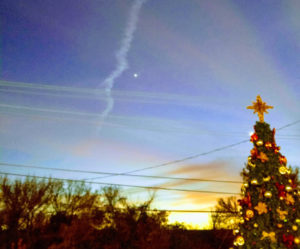 Some friends came by, strangers too, and asked for pictures with him as they stuffed bills or coins into the locked kettle.

One thing I noticed, though, amid the shoppers zipping in and out of Walmart that night:

Not just tired, but weary.

It was a weeknight, not quite peak Christmas shopping season, and already people looked liked they’d rather find a quiet corner and do anything except go into the store.

Their faces, their eyes etched with a big case of the tireds.

I hear ya; sometimes, the last thing you want to do is the thing that must be done.

Also, I’ll cut people some slack on a few of those weary looks. When I’m thinking deeply or on a mission, I’m definitely not looking very jolly or enthusiastic. More like preoccupied.

However, a good number of people appeared weary.

Weary of having to do one more thing.

Weary of explaining to a kid why dad or mom won’t be there for Christmas.

Weary of adding just one more thing to an already packed schedule.

Weary of having to think of purchasing one more gift.

December, a time of rejoicing?

Add all that to the normal mix of life, of bills, of relationships and their ups and downs, of jobs, of family members sick, tired, cranky, you name it.

Why, oh why, do we do this to ourselves, this heaping more on top of our weariness?

We think that when we are busier, do more, make more, bake more, buy more, wrap more, gift more, party more, carol more that we’ll have a better Christmas.

Maybe better is simpler. Maybe a Christmas of rest and not doing quite so much will make it more meaningful.

Maybe if we slow down long enough to think about what Christmas means, apart from the commercial onslaught that’s been attacking us since October, maybe that’s when we’ll find some relief from our weariness.

What are some ways you try to slow down at Christmas time?

And there were shepherds living out in the fields nearby, keeping watch over their flocks at night. An angel of the Lord appeared to them, and the glory of the Lord shone around them, and they were terrified.

But the angel said to them, “Do not be afraid. I bring you good news that will cause great joy for all the people. Today in the town of David a Savior has been born to you; he is the Messiah, the Lord. This will be a sign to you: You will find a baby wrapped in cloths and lying in a manger.”

Suddenly a great company of the heavenly host appeared with the angel, praising God and saying, “Glory to God in the highest heaven, and on earth peace to those on whom his favor rests.”