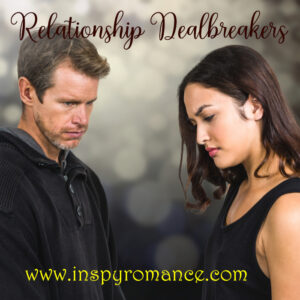 Seventeen years ago, my husband and I met on an internet dating service. It was founded by a Christian clinical psychologist, and it took the issue of compatibility very seriously. That’s why I chose it over other more casual dating services.

Before my husband and I were paired with anyone, we went through over 500 questions that covered a massive amount of ground, exploring our personality traits while also helping us think about the things that matter most to us.

One of the sections in the many questionnaires focused on “dealbreakers”: the red lines you are not willing to cross in your search for a potential marriage partner. For me, there were obvious ones, such as the person had to be a committed Christian. I also didn’t want a smoker or user of recreational drugs.

It makes sense for the dating service to ask clients about dealbreakers early on. There’s much less potential for heartbreak and wasted time if these dealbreaking people are filtered out of your personal online dating pool before any attraction has a chance to develop.

Christians, in general, tend to have baseline dealbreakers: things that are common to most of us. Like, most Christians who are serious about their faith will not date somebody who is married to someone else. Most Christians would also not date a person who is an active, unrepentant criminal.

As a writer of Christian romance, my lead characters don’t include ax murderers or cheating spouses looking for an adulterous hookup. I like to think about good reasons why two single, available, perfectly nice people, cannot be together even though they’ve started to fall in love.

Could it be that one of them wants to live in one part of the country while the other has strong roots somewhere else, and neither of them can move? Maybe one of them has lots of pets, while the other doesn’t like animals. Or perhaps one of them has made a career choice that the other one can’t live with. In my book Hidden in Her Heart, my lead character’s engagement ended because he became a pastor but his then-fiancee didn’t want to be a pastor’s wife.

In one of my favourite Jane Austen books, Persuasion, the heroine broke up with the love of her life because his financial and social status weren’t compatible with hers. It’s a reason that sounds strange in the 21st century, but in Regency England, it was a legitimate barrier to romance.

In Christian romance, the main characters must be morally upright and likeable, so we can’t have people rejecting potential partners for silly or immature reasons.

What do you think of as good reasons why two people in love cannot build a relationship together? What could potentially be too big to form a reasonable compromise? I’d love to hear your thoughts! They may or may not inspire future stories, ha ha. :-)