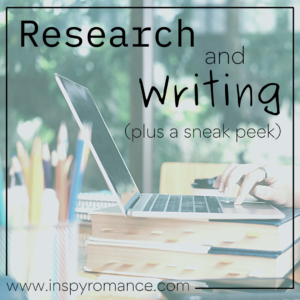 Some writers love to research. I have a few author friends whose favorite part of writing is heading to the library and returning with a stack of informational texts or opening a dozen internet browser tabs and clicking through page after page. I am not one of these people.

I’m sure it goes along with my toddler-sized attention span. I’ve made no secret of my inability to focus on details, even in books I adore. I skim right past those beautiful, lengthy scene descriptions to get to the good stuff. Give me the action, the feelings, the interaction between characters. Yes, I’ll notice gaping inaccuracies or creative liberties, so I do value the necessity of good research, I just don’t want to read a lengthy dissertation from one character to another to prove the author has done their due diligence.

Was that rude? My sincerest apologies, I’m not here to offend.

While reading, I want the facts, I just don’t want to notice their presentation. But that’s hard as an author. I mean, if we’re doing hours and hours of research, it’s more than a little painful to put aside all of those cool and fascinating factoids we’ve gleamed and focus our attention on the story itself. A bit of trivia can add to the story, too much and readers complain (myself included). Finding that balance is SO HARD!

Research is essential, however much a girl like me hates conducting it. It’s pretty easy to spot when someone doesn’t know what they’re talking about or when a character doesn’t meet expectations. I mean, if a character experienced major childhood trauma yet they are perfectly unguarded and super calm in a triggering situation, that wouldn’t go over very well, now would it?

I actually had to do more research than I’ve ever done for an upcoming novella. We’re talking a 21k story here. You’d think I could write a short book without a ton of research, right? Usually, I can. A few quick phone calls to friends who work in a particular field. A couple of web searches for regionally-appropriate slang or mindsets. Two or three blogs or appropriate factual information sites will net the few details I need to write a character or their job authentically. Pinning my references and inspirations into my Pinterest boards. Better yet, sticking to what I know and what I’ve learned from people I’ve known. Easy peasy. But safe.

Easy and safe don’t make for the best stories, though.

This time, my characters and their story required greater research. I spent hours combing the web for companies that specialize in Conrad’s field (helicopter piloting). Spent more hours researching New Mexico and Colorado Search-and-Rescue (SAR) programs, requirements, and procedures. I got in touch with a friend whose husband is a police officer and has worked SAR for years, and we talked for over an hour! All for a few random comments that authenticate Conrad’s career choice and a two-page conversation in which he and Ashlyn explain her heartbreaking backstory to their pastor.

Though my background in psychology and my empathic personality give me a solid basis for understanding Ashlyn and writing her convincingly, I went ahead and read firsthand accounts of people who’d grown up with a controlling parent, which sent me chasing a dozen rabbit trails because people and psychology utterly fascinate me. I’m sure those rabbit trails of research will be useful for at least half a dozen characters down the road.

The research was worth every minute spent, even though I only used about 4% in the actual text. And the story shows it. Only a handful of people have read Braver With You so far, which will come out September 14 as part of the Save the Date limited-time anthology, but their remarks have been overwhelmingly positive. They’re connecting with Ashlyn and Conrad despite the short length, and I’m convinced it’s because of the research that brought their story to life with authenticity.

Now, who wants a sneak peek? Keep reading for an excerpt or click here to pre-order your copy of the collection and ensure its delivery the minute the collection launches! Several of our current and a few former Inspy Romance favorite authors are participating in the set.

Ashlyn Scott darted out of the boutique, glancing up and down the street before crossing to her car. If her mother knew what she was doing right now, she’d never hear the end of it. For years she’d cowed to the demands, the cajoling, the needling, the guilt trips, but not this time. She lifted the weighty garment bag off her shoulder and spread it across the back seat, making sure to tuck the edges safely inside.

The guilt didn’t hit until she’d buckled her seat belt.

What had she done?

Stop, Ash, you did nothing wrong.

Then why did it feel as if she’d just stolen that dress? Why the urge to floor it from the scene of a crime?

Or perhaps it was what this moment represented—a whole new trajectory apart from what had been planned for her life since she was five. A life she enjoyed, mostly, but was it so wrong to want it on her own terms for once?

Her brown eyes connected with her glasses-wearing reflection in the rearview mirror before flicking to the gleaming vinyl bag. A thrill raced through her at the monumental secret now in her possession. It would upset her mother, but right then, Ashlyn couldn’t bring herself to care. In fact, the mere memory of how she’d looked not fifteen minutes ago, how she’d nearly broken down in front of the poor sales lady because she’d found the dress—with no one’s help or involvement—emboldened Ashlyn’s resolve.

It might have started with a dress, but it wouldn’t end there.

Or maybe it would.

Ashlyn wavered. She hated being gutless and indecisive.

She started the car and braced against the blast of hot air, sending up a prayer of thanks when it turned cold. Pressing a finger to the Voice Dial button on the steering wheel, she called the one person who’d support her unconditionally.

“Hey, babe.” Conrad’s voice filled her with peace. “How did it go?”

His soft chuckle brought a picture of his sideways smile to mind. “Found what you were looking for?”

“I’m still not sure about the secrecy angle, but I understand your reasoning.”

Conrad was honest to a fault, and asking him to participate in this deception would come at a cost. But after two decades of suffocating under her mother’s influence, this was the only way.

“Thank you.” She checked her mirrors, still feeling like she was getting away with the heist of the century. Silly, when she’d forked over a hefty chunk of her paycheck for the symbol of her independence. “When are you coming home?”

“How did the interview go?”

Ashlyn perked to attention, not an easy feat while driving sixty-seven miles an hour on I-25 with as much adrenaline as she had flowing through her veins.

“The job’s in Cañon City, Colorado.”

“Yeah.” His heavy exhale told her all she needed to know.

He wanted this job, but he worried about taking them away from the safety and comfort of Albuquerque. She understood better than anyone—both the desire to leave and the gut-clenching fear while staring over the edge of the nest. Especially with their mother hens discouraging them from flying the coop.

It was time to be brave.

“Where you go, I go. We’re a team, and I fully support your decision,” she said with conviction.

“Are you sure?” Layers of meaning filled those three simple words.

Was she sure about moving? Yes. Sure about leaving their mothers behind? Also, yes. About marrying Conrad and following him wherever his job took them? A thousand times, yes.

“You know better than to ask me that.”

She didn’t need to see his smile to know he wore one. They’d been best friends as far back as either could remember and read each other’s faces better than a beloved book.

“Practicing the words already, are you?”

He answered with another light chuckle. “Counting the days.”

Ashlyn’s heart did a playful schoolgirl skip in her chest. Could this man be more perfect for her?

“Me too. T-minus forty-five days.”

“Same. Love you. Enjoy the rest of your trip.”

Thanks for hanging out with me today! I hope you enjoyed this excerpt from the opening of Braver With You. Tell me in the comments what you think about research and how it’s presented in your favorite CCR books. Do you like a lot of facts and detail or do you prefer a more subtle presentation?