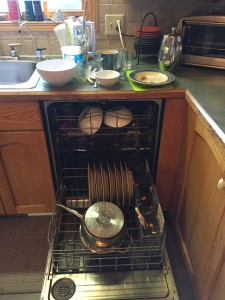 This is a picture of something that is not unusual or new. Every morning I face this.

And every morning I sigh at the job that lays ahead. I make a face as Resistance washes over me. I. Just. Don’t. Want. To. Empty. The. Dishwasher. I can’t understand why this seems like so much work for me. I should be thankful I have such an amazing appliance. I should be dancing and singing each morning with joy that I have clean dishes to put in my cupboard without a whole lot of work on my part.

But every morning, without fail I look at the dishwasher and I feel a curl of opposition. The sense that this is simply too much work and I don’t feel like doing it.

But if I don’t do it now I’ll have to do it later. So I sigh and pull out the first few plates. Then a few more.

And then, slowly as my hands start working I fall into a familiar rhythm and my mind stops it’s whining. Ten minutes later (I know! A WHOLE TEN MINUTES of my day!) the dishes are put away, the dirty dishes are safely inside and the job that I dreaded is completed. Was that so hard? No. But TEN MINUTES ago the problem seemed like a huge deal.

I have the same difficulty every time I sit down in front of the computer to write. I know what I need to do. I have been doing this almost as long as I’ve owned a dishwasher. Yet every morning I sit down in my office in front of my computer, my hand hits the mouse to wake it up  (which takes significantly less time that it takes me)  and the screen from the work of the day pops up. I look at it and feel the same emotion when I’m faced with the dishwasher. 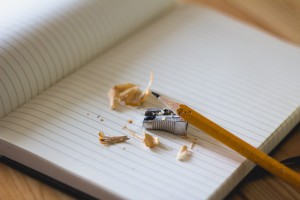 Just. Don’t. Want. To. Write. And before I can even figure out what is going on (in my case the left hand truly doesn’t know what the right is doing in) my mouse scrolls over to Facebook, or Kboards, or my dashboard, or the exchange rate or anything rather than my current writing project. You know those ‘clickbait’ headlines? I happen to be a sucker for them because it’s easier to see why Kate Middleton and Prince George are fighting rather than figure out how to resolve my own hero and heroine’s conflict.

It’s steady, relentless and it’s probably the only consistent thing in my writing career.

Stephen Pressfield in his book “The War of Art” says, “We’re wrong if we think we’re the only ones struggling with Resistance. Everyone who has a body experiences Resistance.”

I like how he capitalizes the word, making it an entity. I wish there was a magic bullet to getting rid of Resistance. I haven’t found it yet. I only know that it uses a variety of tools to do it’s work. Some of them are: 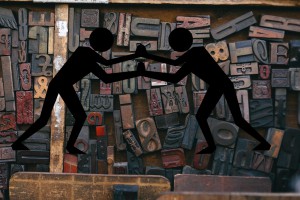 Rationalizing – you don’t need to work right now. You should do this research. You can use the break.

Procrastinating – I’ll get it done later. Tomorrow will be better.

Fear – This is really hard. I don’t know if I can do it. It wouldn’t be so bad if I gave up. Lots of other people haven’t been able to get published. Lots of people have only written a few books and then they’re done.

Excuses – I’m not feeling that good. The words just aren’t coming. I shouldn’t write if I don’t feel inspired. My words will fall flat on the page.

Adversity – Things aren’t going that well for me right now. I’ll wait until the wind blows fairer. My last work got rejected, this one will too.

These can all sound reasonable and plausible. But they are all masks for Resistance. And they are all very sneaky.

Once I learned to name it and to see how it was digging it’s pernicious claws into my writing time I found that I was more prepared when it came. I looked it straight in the eye, did not let it hover over my shoulder whispering it’s crazy lies in my ear. I saw it for what it was.

No. I’m kidding. I slowly found my own ways to fight resistance. The most important one has been routine. Create a routine and then, like emptying the dishwasher, the jobs fall into place. When I follow my routine, Resistance doesn’t have a chance to start luring me away from my job. I don’t give it time to start whispering its lies.

The very first and most important part of my routine is my devotional time. My time to let go of myself. To read my Bible. To spend time with God. To give the day to him. Then I go exercise. Then, I keep my feet moving, my body following the routine as I sit in front of my computer. I give myself some time to check e-mail, Facebook and after half an hour of that (or so) I turn off the internet and get to work. And as I work, as I let the words get pulled out of me, the resistance fades and the lives of my character start to matter.

And at the end of the day a sense of satisfaction and well-being come over me that I never feel on the days I’ve given in to Resistance as I wasted time on Facebook, checking out videos on YouTube, cleaning out my wool stash,spending time on writing forums,or researching the best writing programs always searching for that elusive magic bullet that will slay all  my dragons and write my story for me.

I’d love to say that this routine happens every day. That each day I flow through the above jobs and every day I get oodles of writing done. It has taken me a few years to find my routine. And yea, I’ve had my off days. I’m not always so faithful. But the many days I do follow this routine are the days I have been able to still the lure of Resistance. These are the days I feel the best about myself and my day. I cling to that feeling, hold it close and use to to remind me to take that first step in my day. That first step toward my chair to pick up my Bible and then routine takes over and the hands start working.

And the work gets done.

What about you? Do you face resistance? What do you do to overcome it?