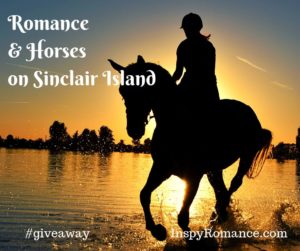 As my next post on Inspy Romance will be my last post here (sniffle), I wanted to use this opportunity to introduce a wonderful new to me Christian author, Hilary Walker! I haven’t read many romances with horses, but I think I need to remedy it now. Here’s the post from Hilary Walker.

A year ago, I moved to Hilton Head Island and absolutely love it.

Nearby Daufuskie Island can only be reached by boat and regular vehicles are not permitted on the isle. Everyone travels in golf carts, making for a very peaceful atmosphere.

Recently a friend of mine was giving a dressage clinic there and invited me to come along. The barn manager met us off the local ferry and drove us to the equestrian center in her golf cart – with me clinging onto the back! – and explained how she’d met her husband on the island.

When another staff member said she was dating a man who works at a local restaurant, my writer’s brain leapt into gear. It was all there – horses and romance on an island – waiting to be woven into a story! By the time I returned home, Saving Prophecy was born.

I chose to invent my own island as I had a hard time visualizing romantic couples dashing around in golf carts. There was something slightly comical about it that I just couldn’t get past!

Sinclair Island is also accessible only by boat, but cars are allowed. Originally owned by Fulton Sinclair’s family, the island was 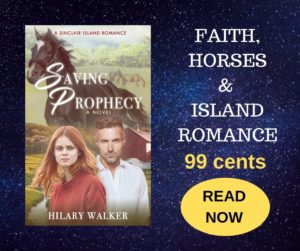 sold by his parents and now Fulton just has his house and barn by the waters of the sound. He has sworn off women who love horses, after his ex-girlfriend left him with a long scar and a mean mare named Prophecy.

Emma recently lost her job as manager of a big horse enterprise and buys the house next door to Fulton, but doesn’t intrude on his privacy.

Then disaster strikes and he has to ask her help with his three horses. Fulton hates Prophecy. He wants the dangerous mare gone, but allows Emma to work with her for a limited time to turn the horse around before sending her to auction.

During the daily training sessions, he falls in love with his attractive neighbor – but the pretty black horse has already stolen her heart. When Emma asks to buy Prophecy, Fulton realizes he’s again fallen for a woman who cares more about horses than him. He becomes distant – and even more determined to get rid of the mare.

Now that he’s pushed her away, Emma discovers her true feelings for him and is devastated. Her only hope of winning Fulton back is to sacrifice the horse she adores to prove she loves him.

But can she bring herself to surrender Prophecy? And can Fulton conquer his deep distrust of women who love horses?

Saving Prophecy is a story of how God makes good things come out of bad for those who love Him and is the first of the Sinclair Island Romances.

Do you like seeing animals in romances? What would be your favorite animal? Which ones would you like to see more of?

And now for the giveaway! One randomly chosen commenter to this post will receive a $5 Amazon gift card. The giveaway is open until 6 p.m. CST September 2nd, 2019 to people with a www.amazon.com account. I look forward to your comments!

About Hilary: Originally from England, Hilary Walker is passionate about horses, so they always feature in her novels! She graduated in French and German from Exeter University (J.K. Rowling’s alma mater) and her original career was as a CPA with Ernst & Young. She first worked in London then Frankfurt, Germany where she met her American husband. Now she’s enjoying life with two English Bulldogs on Hilton Head Island, riding her home-bred gelding, Cruz Bay and writing Christian novels. Her real mission is helping to bring souls to God.