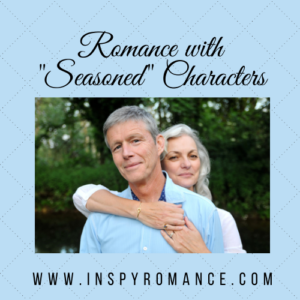 I never understood that phrase… “seasoned” characters? I don’t know if it is my inability to think of anything but food 80% of the time, but I can’t help but wonder what particular seasoning we are talking about here. Salt and pepper like the hair of a “distinguished” older man, I guess? Haha!

Romance with mature characters, silver fox romance, later-in-life romance, or seasoned-romance. Whatever you call it–romances with characters in their 40s, 50s, and beyond is a special subset of romance! And I see all you out there asking for more of it.

If you’ve read any of the Heroes of Freedom Ridge books, then you’ve met Jan Clark. She’s Aiden’s (the firefighter from Book 1 – Rescued by the Hero) mother, and the proprietress of Stories and Scones, the beloved bookstore/coffeeshop/bakery. She might be the only character to appear in every single book, come to think of it.

When I first met Jan, I was reading an advanced draft of Rescued by the Hero and I immediately wanted to write her story. An entire year later, I finally got to do so.

Despite what I felt like were inadequacies in my ability to write Jan’s story, let me tell you what I did LOVE about writing it (and reading a few “seasoned” romances in my preparation).

I enlisted some extra help to make sure my seasoned romance really hit the mark, including bringing in some extra beta-readers (Thanks Trudy, Vicci, Mandi, and Liwen!) and I did some extra reading of my own.

If you’ve been looking for some romances with “seasoned” main characters, here are a few recommendations!

–The Chapel Cove Romance Series (multiple authors) – I haven’t read all of these, but I read a few and they were great reads.

– Hope Ranch by Elizabeth Maddrey (The payoff for this one is reading all the previous books in the series, because each book is about Elise’s adult children, and she gets her happy ending in this story! It’s very well done.)

–Beyond Titles and Tiaras by Carol Moncado (I’m a sucker for an off-limits love story, so the Queen-mother and the head of royal security… I loved this story!)

–Heart’s Treasure by Dora Hiers – This is part of the newest Potter’s House Collection and it was a really sweet small-town second-chance story!

Here’s a small excerpt where you get to see some of my favorite parts of Jan and Pete together.

Jan frowned. Were men really that clueless? She’d almost forgotten. “What happened? You happened! I was perfectly content, Pete. I was happy with my little coffee shop and my grandson and my church friends. I was happy with our friendship.” Pete’s face revealed nothing. Her frustration bubbled over. “And then you went and—” she whipped her finger in a spiral, “—stirred everything up.” 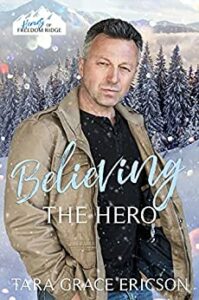 She took a deep breath and continued with a calmer voice. “Pete. I’m too old for this. I don’t want to play games with you. I want to be with you. For the first time in a decade, I feel as though I found someone to call a partner again.”

Pete’s eyes softened and he sighed. “Jan, I can’t–”

“Oh, stop it, Pete. Give me one good reason you can’t! And if you say you don’t feel the same way as I do, I’m calling malarkey.”

A smile broke through the stoic facade of Pete’s face, but he didn’t say anything.

Jan pushed a little further. “Do you? Feel the same way?”

Pete pressed his fingers to his eyes and he groaned. “Argh. Yes, Janet. Of course I do. I’ve been trying to show you how I felt for a while now.” He moved closer to her spot on the couch and grabbed her fingers.

Hope blossomed deep in her chest again, and she tried to tamp it down. They’d been here before.

You can pre-order Believing the Hero now. It releases on November 3rd! In the meantime, you can catch up on the other 8 books in the Heroes of Freedom Ridge series and get to know Jan and Pete even before you get to see their story unfold!

Do you enjoy “seasoned” romance? What do you want authors to know about what you are looking for in those stories?