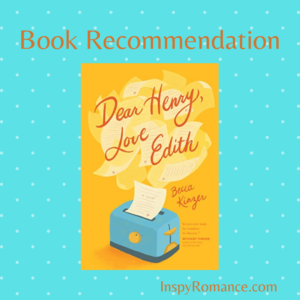 Happy Friday! Today I’m sharing my book recommendation for the delightful romcom, Dear Henry, Love Edith by debut author Becca Kinzer. Elizabeth, Valerie, and I had the pleasure of chatting with Becca at StoryChats @ InspyRomance in the podcast/YouTube episode #104 that dropped this morning.

He thinks she’s an elderly widow. She’s convinced he’s a grumpy old man. Neither could be further from the truth.

After a short and difficult marriage, recently widowed Edith Sherman has learned her lesson. Forget love. Forget marriage. She plans to fill her thirties with adventure. As she awaits the final paperwork for a humanitarian trip to South Africa, she accepts a short-term nursing position in a small Midwestern town. The last thing she needs is a handsome local catching her eye. How inconvenient is that?

Henry Hobbes isn’t exactly thrilled to have Edith, who he assumes is an elderly widow, dumped on him as a houseguest for the summer. But he’d do almost anything for his niece, who is practically like a sister to him given how close they are in age. Especially since Edith will be working nights and Henry works most days. When he and Edith keep missing each other in person, they begin exchanging notes—short messages at first, then longer letters, sharing increasingly personal parts of their lives.

By the time Henry realizes his mistake—that Edith is actually the brown-eyed beauty he keeps bumping into around town—their hearts are so intertwined he hopes they never unravel. But with her departure date rapidly approaching, and Henry’s roots firmly planted at home, Edith must ultimately decide if the adventure of her dreams is the one right in front of her. 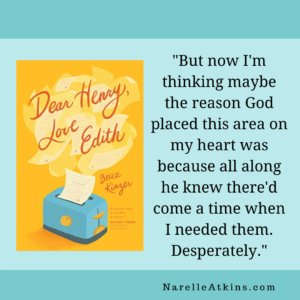 I loved reading Dear Henry, Love Edith, a small town romantic comedy novel from debut author Becca Kinzer. When I first saw the title, I thought the book was a historical romance. Once I started reading, I found the mistaken identity trope LOL hilarious, especially because I’d made the same initial wrong assumptions as the main characters.

Henry has taken over the family painting and construction business and is struggling to live up to family expectations. He lives in a small town in Illinois, and his niece has promised a friend that she’ll provide accommodation in her home over the summer for a lady named Edith.

Edith is a nurse, and she’s filling in time in Illinois doing overnight volunteering at a women’s shelter while waiting for her passport to arrive. Edith’s grand plan is to follow God’s calling and embark on an overseas adventure by doing volunteer work in South Africa.

Henry’s niece’s kitchen unexpectedly floods, and she talks Henry into letting Edith stay in his home until the kitchen problem is fixed. When Henry learns Edith is a widow who’s temporarily in town doing volunteer work, he assumes Edith is a senior. Edith assumes that Uncle Henry must be a generation older than his niece, and Edith appreciates the opportunity to stay in his home.

Henry and Edith’s first meeting, as strangers in the town diner, is LOL hilarious. They’re drawn to each other, but they have no idea that they’re living in the same house because they’re like ships passing in the night. They start leaving notes in the kitchen that evolve into lengthy letters where they share deeper thoughts and feelings with each other.

I loved how the mistaken identity romance trope played out in the story. The cast of supporting characters in town were quirky and funny and created more misunderstandings for Henry and Edith as the story progressed. Edith’s late husband’s brother, Steve, is the villain who I liked seeing getting what he deserved in LOL situations. I appreciated the faith elements in the story that challenged the characters to move outside their comfort zones and touched on deeper issues.

I recommend Dear Henry, Love Edith to contemporary romance readers who like mistaken identity romcoms with a relevant faith element in the story. Many thanks to Tyndale and NetGalley for the Advanced Reader Copy.

Learn more about Becca Kinzer and her books at her website.

Questions for you: Do you like reading romcoms? Are you a fan of the mistaken identity romance trope? I’d love to hear your thoughts.