On my last blog I wrote about the illustrated storybook that my son, Kyle, made for his wife, Tiia, just after  they were engaged. Salt & Pepper isn’t a fabricated story. This little picture book is their love story told though Kyle’s eyes seeing themselves as Salt (Finnish Tiia with her blonde hair and porcelain skin) and Pepper (South African Kyle with his dark hair and golden tan). Even the Giant Fork he refers to is real (yes, there is an actual giant fork at the Alimentarium Museum in Vevey, Switzerland, and they sat in front of it).

I’ll reiterate the inspiration behind this book for those who didn’t read my last blog. Kyle and Tiia met on missionary training, but only started dating months after they’d left. On training they had something called Social Policy, which was the organization’s strict rules about dating (or rather non-dating). Even a girl talking with a boy wasn’t allowed unless there was another girl in your company. Salt and pepper (SP) came to be the trainees’ fun way of referring to Social Policy (SP).

Without using up any more of your precious time, here is Salt & Pepper, shared by permission (thank you Kyle and Tiia). I have transcribed the script below each picture for easier reading. (Note: British English used in this story.) 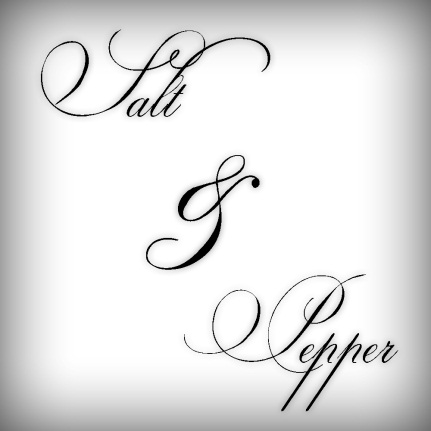 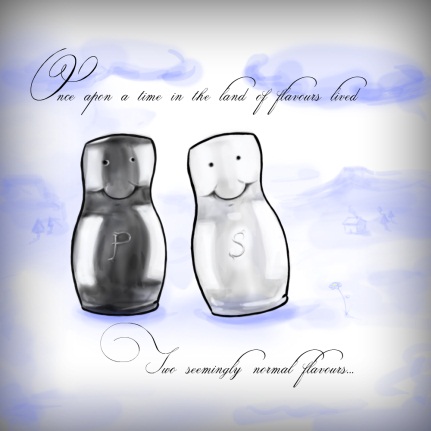 Now Salt, she was something really special. Her beautiful, handcrafted porcelain body made her the talk of the town. But what all the other flavours loved most about her, was the special ingredient deep inside her. She could instantly change the taste of any dinner party with just a touch of her presence. 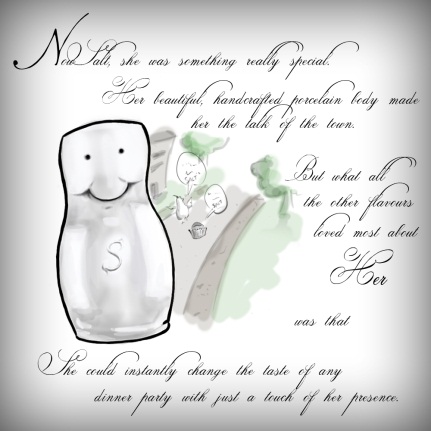 Then there was Pepper… He was dark, but not in a creepy way. He was just different.  And even though he was a little hard-headed, there was something so tasty inside of him. Pepper had the ability to spice up any dish with just a tiny sprinkle of his special flavouring. 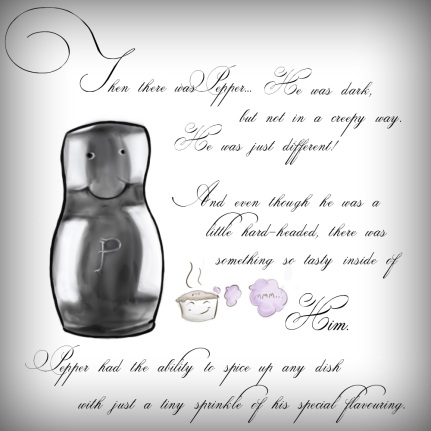 For a long time, Salt and Pepper lived a bland existence in their corners of the spice rack, totally oblivious to how mouth-watering they could be together. 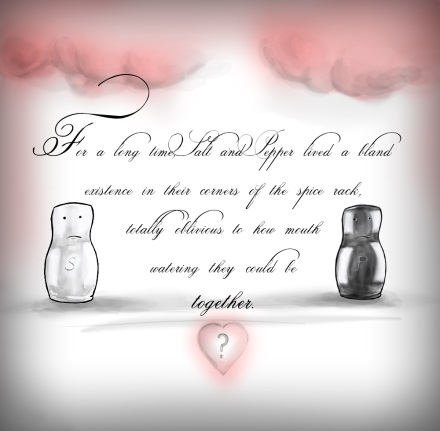 On an ordinary day, they discovered they had something in common – they were both do-it-yourself kinds of flavours. Not far from the kitchen where they spent a lot of their time, they had spotted an old table. It was a little rough around the edges. They decided to go on mission together to turn the wooden wreck into something more palatable. 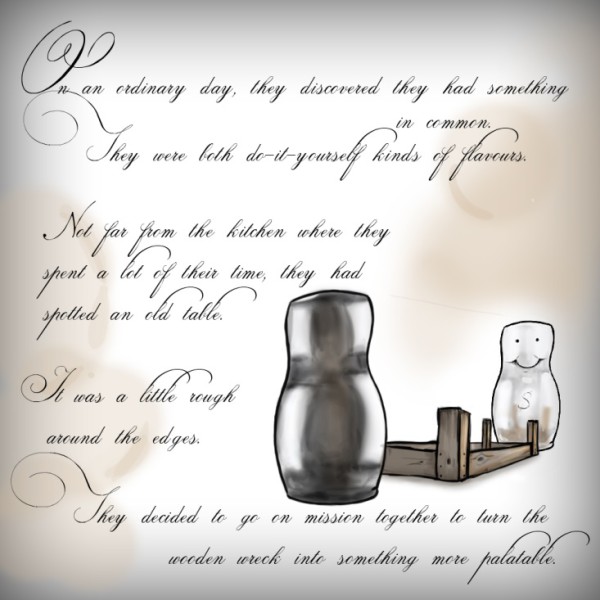 This was the start of something tempting. But because of the social policy ingrained in the old sauces that lived alongside the spice rack, Salt and Pepper kept their flavours pure. 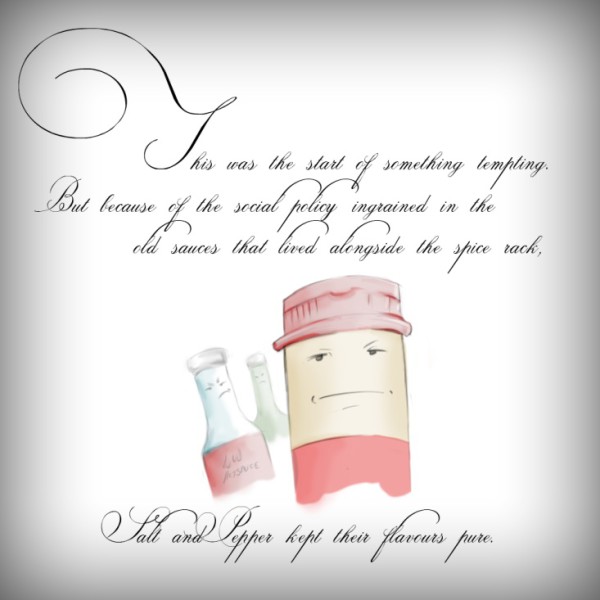 After a few months, they both left the spice rack. Salt returned home where she constantly worried that she would be left on the shelf, that she’d never find her one true flavour – the one who fulfilled her and would complement her for the rest of her life. 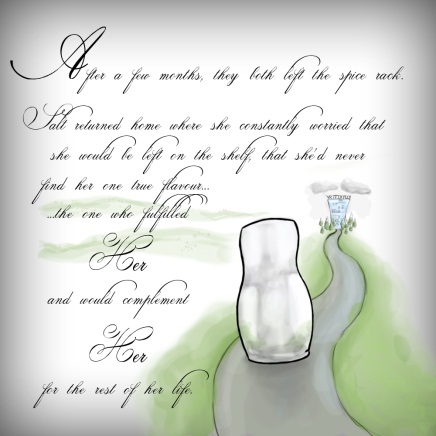 Pepper headed off into the world where he became a seasoned traveller. But there was one pure ingredient missing and Pepper realised it was time to spice up his relationship with Salt. He rushed to the land where Salt now lived. It was a land filled with tiny white crystals. 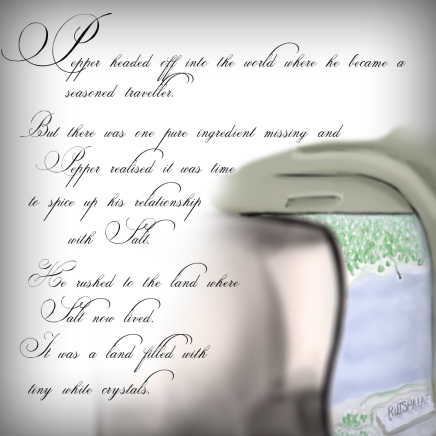 Salt and Pepper savoured every moment they spent together, making flavourful memories. They even carved their names into a rock. Before Pepper had to leave Salt once again, he made sure he spent more than one special moment with her in the shadow of the big fork, making a teenage dream of Salt’s come true. 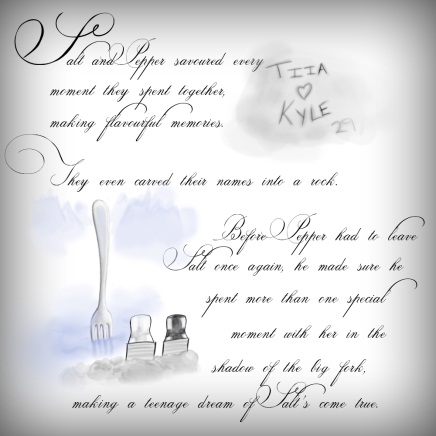 Salt and Pepper have now become inseparable.  One day soon, Salt will become his bride, clothed in the splendorous white of purity. And they will live happily ever after. 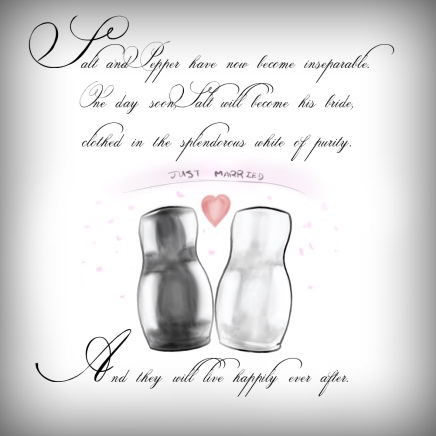 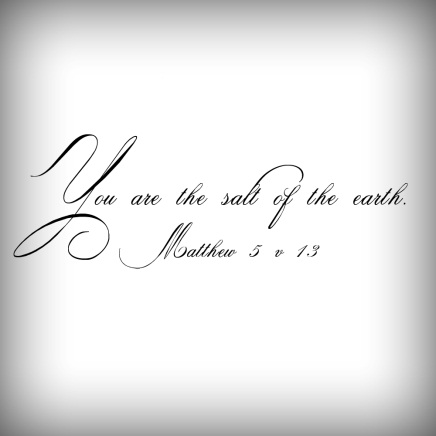 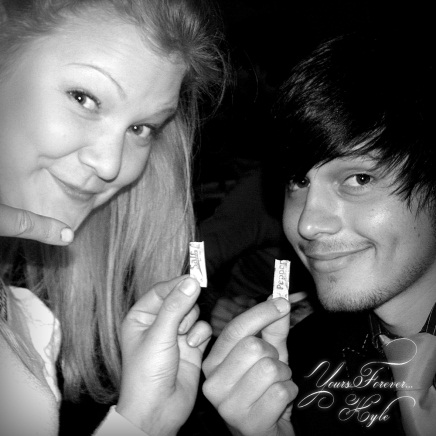 Have you ever received a special hand-made gift from a special person in your life? I’d love to hear your stories.