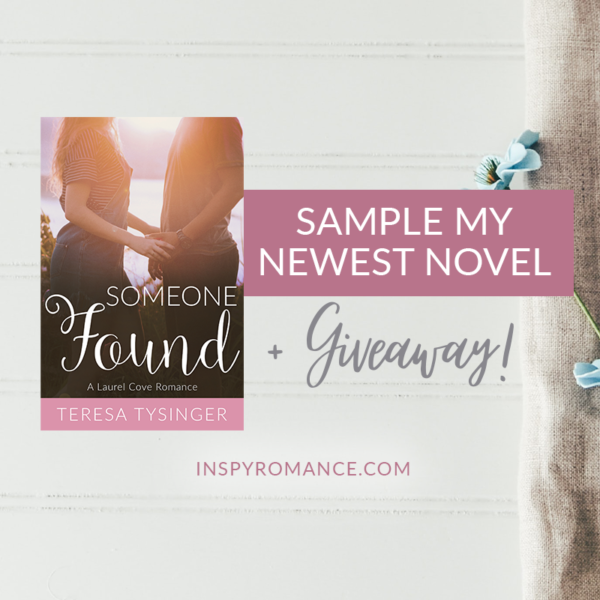 Tomorrow is my nineteenth wedding anniversary! The day has me feeling extra lovey-dovey about having found my someone special. I can’t think of a better way to celebrate than giving YOU something: a sneak peek at the opening scene of my newest novel Someone Found plus a chance to win a copy of the book!

(Have no fear, my husband and I have nice dinner plans, too.)

Sneak Peek Sample of Someone Found

“You have got to be kidding me.”

Quinn McAlister dug her fingertips into the straps of her pack as she eyed the angry charcoal sky staring her down from the west. The Appalachian Trail had proved to be anything but the escape she’d hoped for when she left home without word or warning seven weeks ago.

Despite knowing exactly where she was geographically, Quinn had never been more lost.

A strong gust of wind, unseasonably cool for a June afternoon in the mountains of North Carolina, sent strands of her long auburn hair into a frenzy around her face. She gathered it back in a low ponytail as Sarge, her blue heeler and only companion, darted off from where he sat at her side into the thick brush ahead.

“Sarge, come!” Her voice was whipped away on another strong gust as she lunged off the path in his direction. Was that a raindrop on her cheek? She looked skyward as another drop hit her nose.

She hadn’t been on the trail for more than three hours today but would have to make camp again to get out of this storm. But not before finding where Sarge had gone off to. He was her protector, only friend—and often the biggest thorn in her side, always running headlong into assumed danger. The culprits were usually innocent rodents or falling acorns, except for that one time he’d alerted her to a snake on the trail.

Quinn cupped her hands to her mouth. “Sarge!” She caught sight of his neon-orange collar just off to her left, moving down a slight embankment. Growling thunder and an ominous darkening of the forest announced the nearness of the approaching storm.

She let out a growl of her own and kept moving forward. Few things made her cringe more than being wet out on the trail.

Low branches scratched against her arms as she scurried down the embankment, her small, calculated sideways steps aiming to keep her from slipping on the forest floor covered in moss, leaves, and pine needles.

Flash! Quinn’s arms flew up to cover her head as lightning struck too close for comfort. The accompanying explosion of thunder startled her, and she hit the ground with a breath-stealing thud. Her shoulder wrenched with a pop, and she screamed in pain as the awkward landing catapulted her face-first down the embankment, deluged by the sudden downpour.

She flailed her hands, trying to grip any passing branches or small trunks, then twisted to her side. Maybe her bulky pack would anchor her or at least slow her down. Instead, something snapped. The pack disconnected from her left shoulder—the same one searing with a hot, radiating pain.

Was that running water sounding below her, or just the deluge?

This is not good.

Without warning, her ribs slammed into something hard—a rock maybe, from the gray shadow she glimpsed for a lightning-fast moment. Her pack ​worked its way​ off her other shoulder as she twisted in what felt like a horizontal cartwheel, her feet now leading the violent descent. ​Time seemed to slow as she braced for impact.

But He wouldn’t. He never had before. She was on her own, like always.

The slope of the embankment suddenly eased and she slowed some. She looked up just in time to see a dark column materialize through the thick sheets of rain—a huge, black tree trunk directly in her path. Panic stole her already labored breath, instinct forcing her to roll onto her injured side to avoid a direct collision. But not soon enough. She screamed in agony before hitting hard, her right leg taking the brunt of the impact.

She lay on the forest floor in the shadow of the mighty tree. Why did she no longer feel pain? Staring up into the pinpoints of rain falling onto her face, she thought she heard a bark.

Then everything went black. 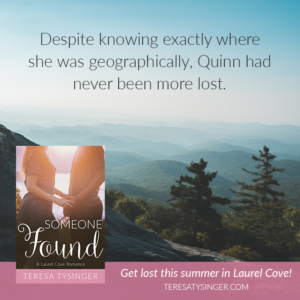 Win a Copy of Someone Found!

I hope you enjoyed this sneak peek into Someone Found and Quinn’s harrowing journey. I can’t wait for you to meet Eli, too. One reader can win a copy of the book! Simply comment below telling me what you think, if you’ve ever been hiking, or about a time you’ve felt “lost.” The winner will be chosen at random on Monday, July 26 and contacted by email.

The winner may choose between ebook or paperback. Due to high costs of shipping outside the US, an ebook will be given if an international reader wins! Thanks for understanding.

Note: Someone Found is the third in my Laurel Cove Romance Series, set in the quiet mountains of North Carolina. Each book is stand-alone and can be read in any order.