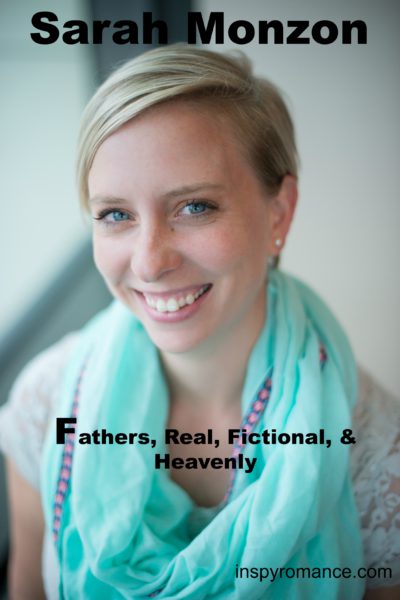 Fathers are so important, but what happens if someone doesn’t have that paternal figure, due to death or desertion? All kinds of fatherly back stories find their way into my novels from deceased one of Sarah Beth in Leaving Oxford to the terrible paternal background of Dylan Conner in Going Up South, to the wonderful country-talking and big-hearted father, Big Roy, in Blown Together. Father’s make such an impact, don’t they?

There can be a hole left in the life and the heart when a father is absent. Sarah Monzon opens up about where life and fiction meet, and how our heavenly Father steps in to fill our empty places. So here are some thoughts from Sarah:

Father God.
A name. A title. Heaven forbid, a cliché. We hear it so many times we don’t let the meaning sink into our daughters’ hearts…or maybe our own perception and experience with a father figure is one that leaves us feeling nauseous to think that God could be anything like that.
In our broken world, there are so many examples of fathers. The Hallmark Channel kind that hoists his precious daughter on his shoulders or pushes her on a swing, the one that protects her from the boys with less than honorable intentions—we aren’t all blessed growing up with a daddy like this. I know I wasn’t.
So where does that leave us and our relationship with our Father in heaven? For me, personally, God became more than a distant father. He became my daddy. I swear I heard his voice in some of my lowest growing up years whispering in my ear the truths that all good parents wish to bestow on their children, “You are precious. You are special. You are mine.” And I know, without a shadow of a doubt, I felt his safe and protective arms wrap around me in a time when I felt alone and afraid, as if he were flesh and bone and set me on his lap.
Did I still struggle with the physical absence of a male role in my life? I’ll be honest. The answer is yes. I’ve had to deal with issues, but I’ve never had to deal with them alone. My Father was always by my side.
Unfortunately for Summer Arnet in Finders Keepers, she not only grew up without a dad, but without the knowledge of her heavenly Father either. She lived with the ache of loss of something she’d never had, yearned for paternal love, and sought to fill the hole in unfulfilling ways. It wasn’t until the arrogant Trent Carrington’s mother…*clamps hand over her mouth* No spoilers!! Sorry about that. *wink* Let’s just say that she ultimately came to know a love deeper than she could ever imagine.
Whatever your own story, World’s Greatest Dad, none at all, or something in between…God loves you and calls you his precious child.

Thank you, Sarah, for the beautiful truths and opening up about your life and your novel Finders Keepers! 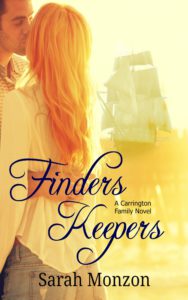 Sarah Monzon is a Navy chaplain’s wife and a stay at home mom to the two cutest littles in the world. Playing pretend all day with them isn’t enough, she spends the evenings after their heads hit the pillow to create her own imaginary characters. When she isn’t in the world of make believe, she can be found in a small desert town in central Washington taking care of her family, fostering friendships, and enjoying all the adventures each day brings.

Do you have a favorite father in fiction? Sarah’s giving away a signed copy of Finders Keepers to one our commenters!  Leave a comment by Wednesday, Novemeber 23rd.