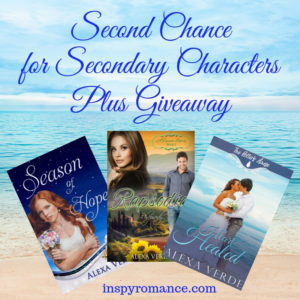 When you spend a lot of time with someone, you get attached to that person, don’t you? Well, as an author, I spend a lot of time with my characters. I get to know them, I sympathize with their hurts and rejoice when they find their happily-ever-after. Even after I type “The End,” it’s difficult to say goodbye. However, the story of the main characters is already told. The solution?

You guessed it. Give a chance at love and happiness to secondary characters. While I do love series, I noticed that even when the books are not supposed to be connected and belong to different series, my secondary characters decide to star in new books and don’t take no for an answer.

Season of Hope was supposed to be the last book in the trilogy Rios Azules Christmas. (That might change). But… Poor Miriam Lizarraga! She was in love with the hero, but her feelings weren’t returned. While beautiful, famous, and happy on the outside, she had a painful childhood trauma and needed healing. Really, how could I leave Miriam in such a terrible situation?

Now, this wounded beauty needed a hero who’d risk his life to keep her alive, but who’d also require his own healing. When I was writing Rapsodia in A Tuscan Legacy series, the main hero Marco had best friend, Philip. Once outgoing and sociable, Philip changed after an accident that had scarred him. There were also much deeper scars on his soul left by the person who was supposed to love and protect him… Well, it would be unfair to just forget about Philip and have him suffer, wouldn’t it? And I’d never want to be unfair! So, Heart Healed was born.

Can a scarred man running from his past and a beautiful star running from her future survive a murderous attack and find healing in God’s loving arms? 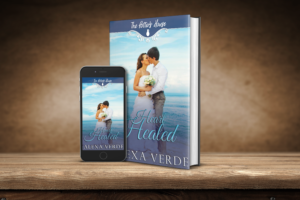 Do you like seeing secondary characters appearing in new books and getting their own stories? Do you ever feel sad to say goodbye when you finish reading the book?

Giveaway! One randomly chosen commenter to this post will receive 1 ecopy of my books (winner’s choice) to be gifted via BookFunnel. The giveaway is open until 6 p.m. CST September 19th. I look forward to reading your comments!