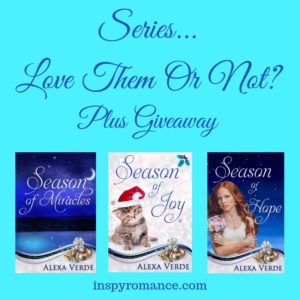 I love reading series. I enjoy the main hero and heroine’ story and often find myself rooting for secondary characters and wanting them to get their own books. And in the following books, it’s fun catching up with the characters I already fell in love with! I might be partial here because Autumn is a friend, but I think Love In Store series by Autumn Macarthur is great. I bought every book in this series. When I read Book 1, The Wedding List, I couldn’t wait to read the story of Anita, a feisty red-headed best friend of the heroine. Anita had so much spunk! So I was glad when Teapots and Tiaras, Anita’s story, was published.

And here’s a chance to start reading another one of Autumn’s series, Sweetapple Falls at no charge! Today is the last day Book 1 in this series, His Father’s Son, is free. Book 2, His Healing Touch, is only $0.99. I read many of Autumn’s books, and His Healing Touch is one of my favorite!

I also enjoy writing series. Once I envision the story of the hero and heroine, I have to imagine their friends and family, too, right? And when I begin writing about these people, I start caring about them. I’m curious about what’s going to happen to them and want to follow them on their journey to their happily-ever-after. And yes, I get attached to the main characters and I miss them after I type THE END. Writing the next book in the series gives me the opportunity to sort of spend time with them again.

After writing Season of Miracles, I wanted to see what would happen to one of secondary characters, single father Dylan and his sons. Really, how could I deprive three people from finding happiness? So, Season of Joy had to be written. And then, Season of Hope was calling me because Dylan’s sister, a widowed single mother Kelly, deserved a second chance. I loved writing the Rios Azules Christmas series, and I hope so much they are touching readers’ hearts. For some reason, I tend to like trilogies, but a few readers told me they wished the series didn’t end.

There are so many joys of writing series. But one of the challenges for me is when I get distracted by ideas for other books, 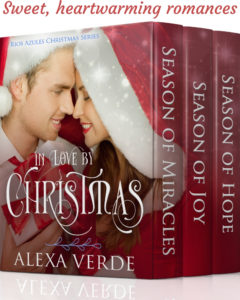 and the series is left unfinished.

Do you enjoy reading series? What are the ones that stand out in your memory? Do you like trilogies or prefer longer series? And would you read the books if the series is unfinished, even if the books can stand alone?

Giveaway! One randomly chosen commenter to this post will receive 3-book set, In Love by Christmas, that has featured books in the Rios Azules Christmas series. The giveaway is open until 6 p.m. CST on December 26th, 2018. I look forward to reading your comments!