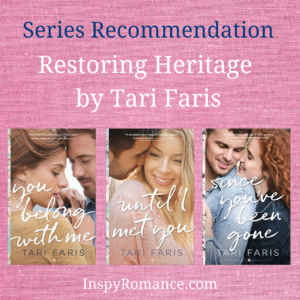 I loved reading Tari Faris’ Restoring Heritage contemporary Christian romance series set in a small town in Michigan. The series includes three trade length novels and two novellas with eight romantic pairings in the series. The full length novels each include a romantic subplot. Let’s take a closer look at the romances that span the series. The Restoring Heritage series opens with a prequel novella: P.S. Goodbye. 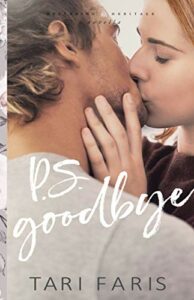 P.S. Goodbye is Carolyn and Grant’s romance story. It’s a fun prequel romance novella that introduces us to the larger cast of characters in the small town of Heritage.

The story opens with Carolyn anticipating a wedding proposal from Mason, her boyfriend for the past four years. Instead, Mason breaks up with her and turns her neatly ordered and planned world upside down. Carolyn drives to her cousin Nate’s house to lick her wounds. Nate is the new pastor in Heritage, and Carolyn is stunned to find Grant, Nate’s best friend, is staying at Nate’s.

Carolyn has had a crush on Grant since she was thirteen, and when she was eighteen she almost thought she had a chance with him. Grant has been medically discharged from the Special Forces and he carries a whole lot of baggage, including the betrayal of his brother now being engaged to Grant’s ex-girlfriend. Grant is staying at the parsonage with Nate while he gets back on his feet.

Carolyn is a newly accredited life coach. She helps run their family store called WIFI with her twin sister, Leah. Carolyn and Leah hire Grant to create an online presence for their struggling store. Carolyn is perplexed to be stuck working in close proximity with Grant, and their simmering attraction can’t be ignored now their five year age gap isn’t an obstacle. Learn more about Carolyn and Grant’s romance story in P.S. Goodbye here.

In P.S.Goodbye we also meet Hannah and Olivia, who are close friends with the twins. Olivia and Janie are sisters. Janie moved to Paris after Hannah’s brother, Thomas, broke her heart. Thomas is now interested in a relationship with Madison. And Leah has a long time crush on Luke, who only has eyes for Hannah. Pastor Nate and Olivia are friends with the potential for more. 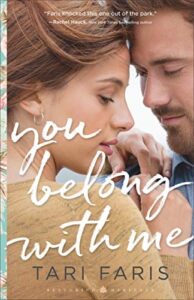 You Belong With Me is Hannah and Luke’s romance story. Hannah is a realtor who wants to restore the town of Heritage to its former glory. She’s on a mission to save Heritage from a local developer (Jon’s uncle) who wants to build a strip mall in the middle of town. Luke is a former foster kid who is looking for somewhere to belong. Luke and Hannah are best friends, and Luke has loved Hannah for years. After their dating disaster in high school, Luke doesn’t believe he’s good enough for Hannah, and they are stuck in the friend zone. A fun romance develops as Luke starts to unravel the secrets from his past. Luke and Hannah are probably my favorite couple in the series, although it’s super-hard to try and choose a favorite when I loved all the romantic pairings for different reasons. 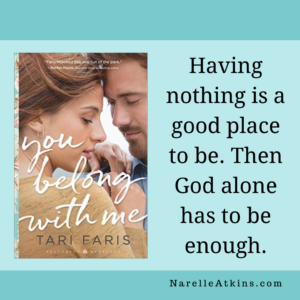 The romantic subplot in You Belong With Me is Janie and Thomas’ romance story. Janie has returned from Paris to find Thomas engaged to Madison. Janie is employed as a pastry chef at Donny’s Diner that’s owned by Thomas and Hannah’s uncle and aunt. Janie’s sister, Olivia, also works at the diner. When circumstances lead to Thomas working at the diner, everything becomes complicated and messy for Thomas, Janie, and Madison. Learn more about You Belong With Me here. 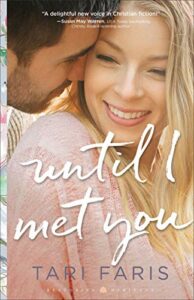 Until I Met You is Libby and Austin’s romance story. Libby is Luke’s long lost sister, and she’s the new librarian in Heritage. Austin is Nate’s brother who runs the family construction business. They have won the construction contract to redo the Heritage town square. Libby has to work with Austin to create a solution for the location of the new library, and they both struggle with how to manage their growing attraction due to being hurt by past relationships. 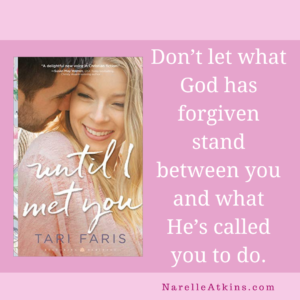 The romantic subplot in Until I Met You is Olivia and Pastor Nate’s romance story. They have been friends for a while, but Olivia can’t convince Nate to act on his feelings. Olivia’s freelance article research assignments that involve Nate are hilarious. Learn more about Until I Met You here. 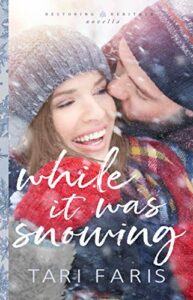 While It Was Snowing is the Christmas romance novella with Danielle and Gideon’s romance story. Gideon is Janie and Olivia’s brother who works with Danielle at the garage owned by her family. Gideon considers Danielle ‘one of the guys’ and a good friend who’s known by the nickname Dan. But everything changes when Danielle’s makeover transforms her into a beautiful girl wearing a pretty dress at Nate and Olivia’s wedding. Learn more about Gideon and Danielle’s delightful romance story in While It Was Snowing here. 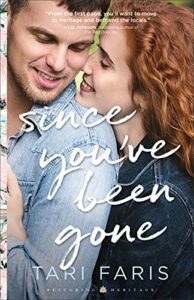 Since You’ve Been Gone is Leah and Jon’s romance story. Jon has loved Leah from a distance since high school, but Leah has always thought Jon hated her. Leah is back in Heritage after serving with her brother in a mission in Costa Rica, and she wants to reopen the WIFI. Jon is a professional basketball player who has returned from Europe with his younger sister to take over the family business. His uncle took over managing Heritage Fruits after Jon’s parents tragically passed away. The WIFI business premises is jointly owned by Leah’s family and Jon’s family. Jon proposes a business arrangement with Leah to assist her in reopening, and also takes steps to try and win her heart. 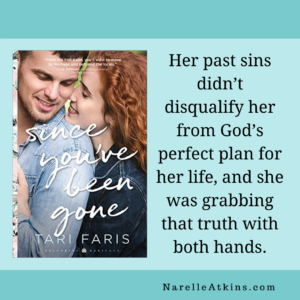 The romantic subplot in Since You’ve Been Gone is Madison and Colby’s romance story. Madison is one of my favorite characters in the series. I loved seeing Madison’s journey to faith and seeing her find her own happily-ever-after. Colby is a recording artist who’s hiding out at Nate’s to avoid the scandal engulfing his Christian band. He forms an unlikely friendship with Madison, who has returned to Heritage pregnant, alone, and out of good options. She needs to sort out her late father’s estate and fix up the house to sell. Madison is the girl from the wrong side of the tracks who never felt she belonged or was good enough to be friends with Hannah, Leah, Carolyn and their close group of high school friends. Learn more about Since You’ve Been Gone here.

I loved the strong friendships in the group of Christian women who went to high school together in Heritage and stayed in touch. They’re doing life together even if they’re geographically apart. The small town dynamics in the series are heart warming and realistic. Everyone knows everyone else’s business in Heritage. The townsfolk embrace Hannah’s vision and want to see their town revitalised and prosperous. Otis, the brass hippo who mysteriously moves around the town, is an adorable and quirky addition to the series.

We recently chatted with Tari Faris at StoryChats @ InspyRomance in Episode 37 and talked about Since You’ve Been Gone. I couldn’t resist asking Tari to share her inspiration for Otis.

Questions for you: Have you read any of the books in Tari’s Restoring Heritage series? If yes, do you have a favorite book or romance couple? I honestly can’t pick a standout favorite book, lol. Do you like reading series books in order? If yes, do you read each book as they release, or binge read them when they’re all available? Do you reread favorite series? I’d love to hear your thoughts.

I received an advanced reader copy of Since You’ve Been Gone from the publisher. Many thanks to Revell and Net Galley.