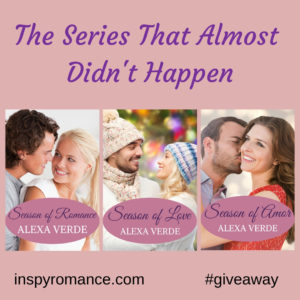 ‘m not a person who gets lemons and immediately starts making lemonade, or a lemon pie, for that matter. So when two of my novellas were unpublished as part of the Kindle World, I just let them vanish. I procrastinated. But then…. I couldn’t let them go. The story about the heroine and the child with diabetes was especially close to my heart. This was a very personal book and one I wanted to write for a long time. What if it could still touch many readers and hopefully even help some people whose family members and/or beloved ones suffer from diabetes?

So I decided to move the setting to my beloved (though sadly only fictional) small Texas town, Rios Azules, and make the stories 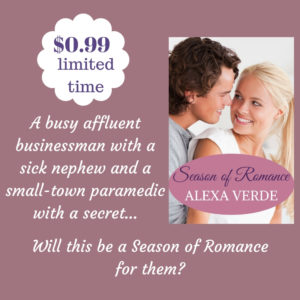 bigger and better (by design, they were shorter novellas in the beginning). And so Season of Romance and Season of Love were born as part of the Rios Azules Romances: the Macalisters series. It took me much longer than I’d anticipated to have them ready for publication. I added so many new scenes  and revised them so much they became nearly twice bigger. And while Season of Love remained fun and light-hearted, I added an important spiritual message I learned the hard way.

I’ll admit that I enjoy giving new life to old things and it takes me a while to give up on something I’m used to, be it books or clothes. I guess I don’t like to let go things I’m familiar with and that can still can be useful for a long time!

Then it got complicated. I like thinking in the terms of trilogies, so I needed a third book in the series. Thankfully, there were four of the Macalister siblings, so it seemed fair for Ray Macalister, who grew up with three sisters, to get his story. As Ray was a nurse, I put a new spin on the traditional doctor-nurse plot. But then Season of Amor… took an unexpected turn. While the first two books in the series are Christian romances, the plot in the book 3 started having suspense elements soon. I followed where the story led me. By the way, if all goes well, today should be the release day for Season of Amor! 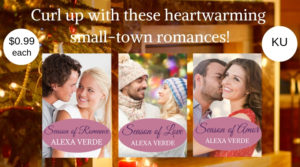 So I’ve done a lot of things I didn’t expect myself doing. I rewrote unpublished stories instead of writing new ones. I released a Christmas book (Season of Love) at the end of January when everybody releases them in October, November, or December. I used a Spanish word, “amor”, for “love” in one of the titles. And then I mixed genres in the same series!

Are you the type of person who makes the best of the bad situation? Do you easily let go? And do you think I’ve made that lemonade? Or have I done a lot of mistakes the author shouldn’t be making?

Giveaway! One randomly chosen commenter to this post will receive complete Rios Azules Romances: the Macalisters series (3 ebooks total) gifted via BookFunnel. The giveaway is open until 6 p.m. CST February 22nd, 2019. I look forward to reading your comments!