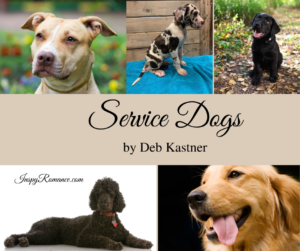 I am super excited to talk more today about Opening Her Heart (Rocky Mountain Family #2). The six-book series introduces the Winslow siblings who own a Christmas tree farm, and a service dog program called A New Leash on Love. I’m having such a wonderful time researching what different service dogs (and how many breeds!!) can do—Autism (The Black Sheep’s Salvation), Epilepsy (Opening Her Heart), Mobility Assistance (The Marine’s Mission), Disaster Relief (currently unnamed January 2022) and two others. I suspect my love of dogs bleeds through fairly heavily in all these books. I’m a dog person through and through. Since I have bipolar disorder, my own miniature schnauzer Gabby (Gabriella Peaches) is my emotional support dog. She alerts when I am dropping into depression or anxiety and responds by bringing me back to the present with her calming touch and love. 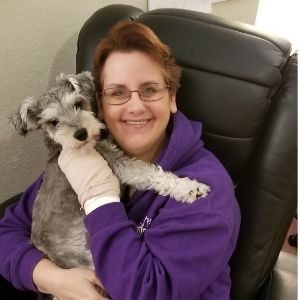 In Opening Her Heart, hero Jake has a lovely little three-year-old girl named Lottie who suffers from epilepsy. One day when they are sharing a pizza with heroine Avery, golden retriever Sissy alerts to Lottie’s seizure even before the humans realize it is going to happen. Here’s a snippet from the book:

“You trained a dog to help a boy with autism? Wow, I’ve never even heard of such a thing.”

“We’ve done some psychiatric service-dog work in the past, but this dog, a Great Dane named Rufus, was amazing. We had no idea. Molly was just out with Rufus one day when he suddenly showed us where he belonged. Without prompting, he took to little Judah as if he’d been specially made for him. Everyone could see it.”

“That is incredible.” Jake could barely put his amazement into words. He’d never even imagined dogs could be so useful.

“I know, right?” Avery actually smiled at him before biting into her pizza again. Another real smile, not the tight, gritted-teeth variety she’d given him since they’d met.

He tried to ignore what that smile did to his insides. He had to stay focused on the end goal, and that wasn’t Avery. If anything, the woman was standing right in his way, blocking the puck, so to speak.

Suddenly, Sissy, who had been lying down quietly next to Avery’s foot, whined and wiggled over closer to the other side of the bench where the child was sitting, repeatedly nudging Lottie’s chest with her nose and licking her chin.

With a curious gleam in her eye, Avery called her off, but Sissy ignored her and continued her ministrations to the little girl, completely focused on Lottie.

“That’s odd,” Avery said, her brow lowering. “It’s not at all like Sissy to ignore a direct command. Something’s wrong.”

As he stared as his daughter, Jake’s face heated as he watched the dog and realized in hindsight he probably should not have let Lottie pet Sissy before she’d finished her pizza, or at least he ought to insist she go wash her hands now that the dog was touching her again right in the middle of their meal.

What kind of father was he, anyway?

It didn’t really surprise him that she was more interested in the dog than the pizza, having begged for one so many times since she’d learned how to speak. But he ought to be more aware of things like handwashing. It was times like this that made him feel as if he was never going to be able to live up to becoming the kind of parent Lottie deserved. And although he couldn’t imagine why it mattered, he didn’t want to come off looking like a slacker dad to Avery.

“Yes, honey?” he said, immediately locking his attention on his daughter. Something in the tone of her voice alerted him.

It was no longer about the dog, although Sissy was still persistently nuzzling her. Lottie had a strange look on her face—an expression Jake knew all too well.

Sissy barked and nudged Lottie again. Suddenly, his darling girl stiffened like a board and clutched at the edge of the table, her face blanching as, in her spasmodic movements, her arm bumped her glass, spilling water all across the table.

Because he was sitting across the table from her, Jake couldn’t immediately react. But before he could so much as move a muscle, Avery had scooped Lottie into her arms. She knelt down on the floor with her and tenderly laid her on her side. Avery folded her jacket and gently placed it under Lottie’s head, her knees on either side of her and her hands steady near Lottie’s cheeks so she wouldn’t hurt herself.

Avery’s expression was full of concern, but she appeared to know what she was doing, even though Jake hadn’t yet offered a word of explanation as to what was going on with his daughter.

“It’s okay, Lottie. Your daddy and I are right here.” Avery spoke loudly, reassuringly and evenly. “You’re going to be all right, sweetheart. We’re not going anywhere.”

Jake dropped to his knees beside his daughter and gently stroked her shoulder. He knew she could hear him, even if she couldn’t directly respond to his voice. “Daddy’s here. Daddy loves you. Hang in there, sweetie. It’s okay. You’re going to be just fine.”

Suddenly, the dog was down beside them, wiggling underneath Jake’s arm so she could be closer to Lottie, stretching herself out at the child’s side.

Instead of freaking out at the child’s uncomfortable movements and darting away from the little girl, Sissy put her head across Lottie’s chest and gently licked her chin until the seizure had come to an end.

Was there such a thing as an epilepsy-support dog? Jake had never heard of such a thing, but then, he hadn’t ever heard of an autism-support dog, either. The way Sissy was acting right now, it seemed as though the dog instinctively knew what was happening. Now that he thought of it, Sissy had alerted them even before Lottie showed signs that she was going to have a seizure.

Finally, Lottie’s seizure wound down, and Jake met Avery’s compassionate gaze as she stroked the hair away from his daughter’s forehead.

His heart aching until he thought it might burst from pain, Jake nodded. 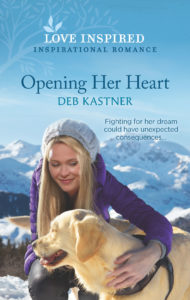 I hope you enjoyed the scene and if you haven’t already, that you’ll pick up a copy of Opening Her Heart wherever you usually shop.

So back to you…what breeds of dogs would you think might best work as a service dog? (HINT: ALL of the dogs in the feature image at the top appear in my Rocky Mountain Family books!!) Also, please introduce your fur babies.