I love boxed sets and have been a part of a dozen sets, excluding my own two, during the past 3½ years. But over the past 12 months or so, I’ve been somewhat relieved when the sets have come to an end. You’re probably wondering why, so I’ll fill you in.

About a year ago, Amazon clamped down on being able to publish solo ebooks for books that are in a boxed set and in Kindle Unlimited—unless of course you are the publisher of the set and have a book in the set, then you’re permitted to release your solo ebook. The only way a solo can be released while still in a set and KU, is a print version. I’ve no idea whether this was a new rule they came up with, or an existing one that they suddenly enforced, but the result was that a LOT of authors were sent scurrying to unpublish their solo ebooks.

The more recent box sets I’ve been in, we’ve set a 3-6 month maximum lifespan. A far cry from the second boxed set I was in which successfully hung around for 18 months before the authors agreed it was time to unpublish it. Subsequently, the authors of Somewhere Beyond the Blue said farewell to this little over-sixties boxed set at the beginning of the year.

With a solo book only allowed in print, it becomes rather invisible on the Amazon rankings, because not that many people order print. So I was really glad when I could release the solo of A Time to Push Daisies earlier in January. 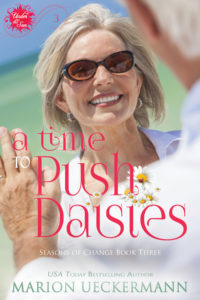 I just loved writing this romance between 64-year-old Caleb Blume, and 65-year-old JoAnn Stanson (and if these names or surnames sound familiar, that’s because Caleb is the uncle of the Blume sisters from my Seven Suitors for Seven Sisters series and JoAnn is in A Time to Laugh and A Time to Love, books 1 and 2 of my Under the Sun—Seasons of Change series*).  I mean, what’s not romantic about a cruise?

It was also so wonderful visiting several places I had been to when we lived in Ireland and holidayed in the UK and Scotland as Caleb and JoAnn became holiday companions when they cruised around the British Isles.

Come Monday, I get to experience another thing they did—a cruise! (albeit about a third of the length their time at sea was.) Now normally I love writing about places I’ve been to, but sometimes the actually visiting, or doing, comes after the fact. This is one of those times.

Hubby and I are going on a short vacation with my son, his wife, and my two grandsons (aged 8½ and 5). We leave Durban harbor (South Africa) on Monday afternoon and will have four nights and three days at sea as we sail up the eastern coast of neighboring Mozambique, stopping at a Portuguese island and another stop higher up at beautiful Pomene. I couldn’t find any public domain images for Pomene, but do yourself a favor and Google Pomene, Mozambique. It looks stunning.

The last time I was at sea was on a ferry—once when we took a 17-hour trip from Ireland to France (and back), and another fast ferry (about an hour) from Ireland to Wales. That long ferry trip was fun (sometimes n-o-t), albeit really cold with teeny-tiny cabins. I also did lunch on a container ship once with the captain and his crew many decades ago with a colleague when I was working for Pilkington Glass in exports. But, a cruise ship…well, that’s just a whole new ball game to anything I’ve been on. Really, they’re floating five-star hotels.

The yellow circle near the front, near the top (just below the deck with black windows) is our cabin and my son’s cabin is diagonally opposite us on the inside because if you travel with children, no balcony cabins are permitted. Everyone will just have to enjoy the view from our room, I guess.

If you want a sneak peek of what we’re in for, here’s a wonderful tour of the MSC Musica.

And speaking of sneak peeks, here’s one of A Time to Push Daisies. Oh, and I promise a blog and photos on this next month.

Here’s what reader, Sharon Dean, had to say about  of A Time to Push Daisies:

JoAnn and Caleb, oh how you have calmed my heart as I often wondered if something were to happen to my soulmate of 27 years, if I could find love again, if I would even want to. It is so scary thinking about this. Would finding love again even be okay? Would I be betraying my soulmate? Through your story, Marion, so touchingly, JoAnn and Caleb have given me hope that it is okay, that God can bring you love twice. The story of JoAnn and Caleb, setting sail on the Azure Seas cruising London, Dublin, Belfast and much more for two weeks, discovering each other, lost loves, no love at all, and finding out a secret that can tear two people apart. Their journey is one of hope, redemption, sacrifice and finding love when you least expect it. Can JoAnn and Caleb come to terms with how God had orchestrated their chance meeting? Or will that painful secret shatter their hearts? Join me in reading this story that will keep you in tears on every page!

I hope you all get to read this wonderful story. I’ll be giving away an ecopy of A Time to Push Daisies to one person who comments.

*  While A Time to Push Daisies is a stand alone story, and can be enjoyed as such, it is advisable to read books 1 and 2 in the series first.