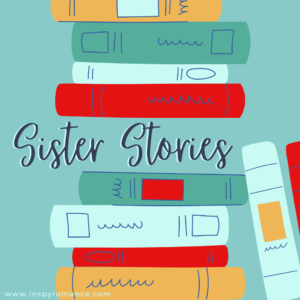 The sister relationship is one of the most complicated. From best friends to mortal enemies, every set of sisters has a different dynamic and relationship, and that’s true not only from family to family but sister to sister within the same family.

With three daughters and a sister of my own, it’s definitely a relationship I have a lot of experience with. I’ve had a lot of conversations with mom friends who grew up with sisters or raised multiple daughters, and the best word to describe each sister relationship is, perhaps, complicated.

A sister is both your mirror and your opposite. – Elizabeth Fishel

Family dynamics fascinate me, especially birth order studies. I love exploring the commonalities and differences. But there’s just something extra intriguing about sisters, which is why I wrote a trio of them in my Sinclair Sisters trilogy.

A sister is a little bit of childhood that can never be lost. – Marion C. Garretty

While each book focuses primarily on the heroine finding romance, I did something a little different in this series. In each book, each chapter contains a peek into their pasts as well as their unfolding present day story. Often there’s an interaction between the hero and heroine that plays into their present day romance, but equally as often there’s another relationship played a role in pushing her forward toward resolving a conflict with the hero: her sister.

It’s funny, because I never set out to make these ROMANCES into a sister trilogy. From the beginning of This and Every Christmas, Clari talked about her sisters. They were united in their parents’ obsessive affection for all things Christmas, and slowly I began to understand how vital the relationship between the three girls was to them. Clari was a natural teacher and mother figure to Lucy (and her other students) in large part because an oldest sister grows up playing those roles by default.

As I wrote this book during the pandemic quarantine of 2020, my three daughters were stuck with each other 24/7 with no way to distance except for their bedroom doors. I began to realize how important the sister relationship was to each of them (my girls AND the fictional Sinclair girls). They fought like crazy but became incredibly close. They developed inside jokes. Shared experiences. They will forevermore have stories that only the three of them know and understand. Even now that we’ve moved on to a more normal life as teenagers, they still have secret conversations, sister sleepovers, push each other’s buttons, and fiercely defend when an outsider treats one of them poorly.

We didn’t want to admit it then, but we were friends. – Shannon Celebi

In writing Charlie—aka CJ—Sinclair’s book Now and Forever Christmas in 2021, the sister relationship played an even larger role in helping CJ’s romance with Tobin unfold. In the past scenes, youngest sister Cindy proves the perfect listener when CJ needs one, providing insight she didn’t expect from someone three years younger. In the present, CJ found refuge and healing in her older sister’s home. She’s the bridge between her oldest and youngest sister, equally close to both but in very different ways.

You’re not my best friend. You’re my sister, and that’s more. – Jenny Han

Cindy’s story has been the most difficult to write because I watch my youngest trying to find her own place with two older sisters who are polar opposites and understanding Cindy probably felt the same way. While the Sinclair sisters bonded over their mutual teenage embarrassment, they grew apart over the years as distance and life experience separated them. Cindy chose to stay in Florida after college. She loves her independent life, but of course, she still misses her family. Still longs for their former closeness. A part of her would love to live nearby and watch her nieces and nephews grow up. But she also needs her space and to live life on her own terms. It’s been fun to explore the way she sees that sister dynamic through a third lens I haven’t yet explored.

So distant yet so close. So different yet so similar. That’s why I love my sister. – Maxime Lagacé 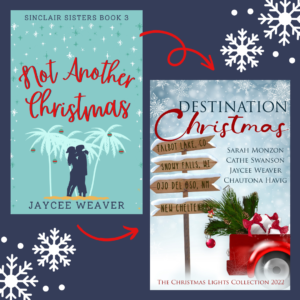 The greatest gift our parents ever gave us was each other. – Unknown

I know Tara Grace Ericson and Marion Ueckermann have contemporary romance series following sisters, but I would LOVE it if you’d share any other CONTEMPORARY Christian/Inspirational romance series or books where the sister relationship plays a significant role. Or if you’ve read Clari and CJ’s stories, tell me if you thought the sister dynamic rang true for you! OR, share with us some of your own sister stories! I’d love to hear your thoughts in the comments.