Has anyone been catching the Christmas in July movies on Hallmark Channel?

I’m not sure where the saying “Christmas in July” came from originally, but there’s a delightful cool and crisp feeling that comes watching snowfall in July…Of course if you’re in the Southern Hemisphere, the world might feel a tad chilly anyway.

Today I’m showing off the cover for my October release with three wonderful authors, titled Sleigh Bells Ring. It’s a set on a Kentucky horse farm close to the fictional town of Bluegrass Crossing, not too far from Lexington. 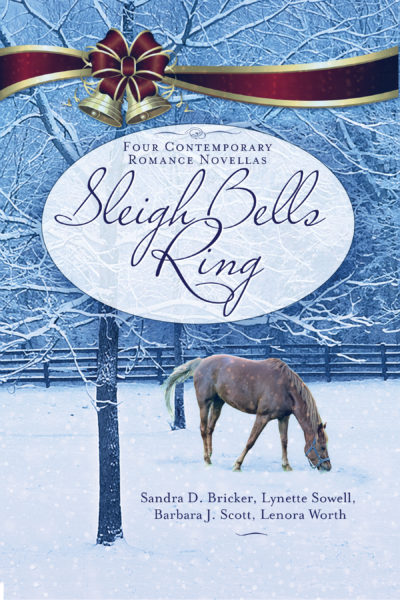 Joanna, Isabella, Sophia, and Amy Tucker were raised on a Kentucky horse farm by a single mother after a divorce she didn’t want—by a woman who never lost her faith, no matter how bad things got. While Robert J. Tucker, known to all simply as “Tuck,” traveled the world as an officer in the Marine Corps, the five Tucker women never had much . . .but they always had fun making the most of what they did have, especially at Christmastime. It was their mother’s favorite holiday, and she had a way of drawing her girls into the festivities and traditions.

Now after their father’s death, the four women return to the farm for one final Christmas, where love awaits them all—along with the memories. The rundown facility which is a home for retired racehorses belongs to them now, but what will they do with it?

My character, Isabella Tucker, is a tough cookie after living for years in the corporate world after leaving Bluegrass Crossing behind her. She loves her sisters, but after their mother passed away during Bella’s sophomore year of college, Kentucky was never the same and she hadn’t been back since. Her father’s sporadic role in her life at a young age has caused her to keep people at arm’s length, especially David, her longtime boyfriend—a Kentucky native she met in the gym at her Chicago highrise. David gets her to go home for Christmas one more time to settle her father’s affairs. But he also has other plans she’s not prepared for!
The individual titles include:

All I Want for Christmas by Sandra D. Bricker

I’ll Be Home for Christmas by Barbara J. Scott

Please Come Home for Christmas by Lenora Worth
Our publisher, Gilead Publishing, will be announcing a fun, fun contest tomorrow, July 15. If you check in tomorrow at my author page on Facebook, I will share the details when that contest begins.

Thanks for stopping by; hope you’re cool ‘n comfortable, no matter where you are. — Lynette