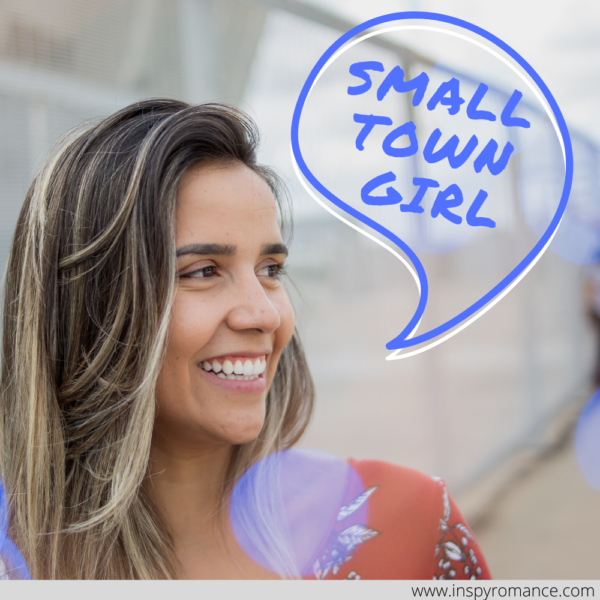 Tomorrow marks the four-year anniversary of our family’s move to Waukesha, Wisconsin, for my husband to take a position as a pastor here. With a population of 72,000, this is the biggest city we’ve ever lived in by far. And it’s part of the Greater Milwaukee area, which has a population of over 1.5 million. Before we made the move here, I was worried about what it would be like to live in a big city (and some of you are probably laughing at my definition of a big city!), but I’ve found that Waukesha actually feels a lot like a small town. Here are some pictures from my morning walks the past couple of weeks—definitely has a small town vibe. (In the first picture, it’s a little hard to tell, but there are turkeys under the trees. As for the last picture…yep, we’ve gotten snow already!) 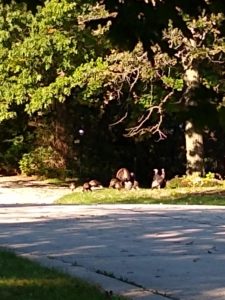 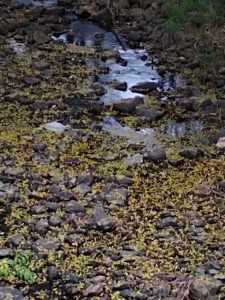 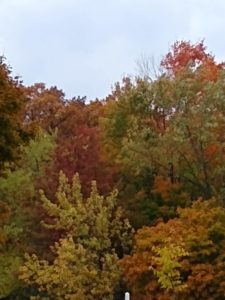 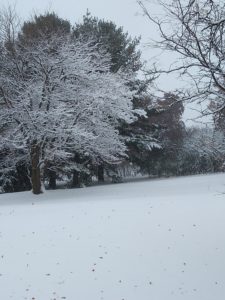 Looking at my books now, I can see how all of these small towns have influenced the fictional town of Hope Springs, setting of my Hope Springs series. But Hope Springs is definitely most strongly influenced by a place I’ve never lived: Door County, Wisconsin. (If you look at a map of Wisconsin, Door County is the little “thumb” that sticks out into Lake Michigan on the eastern side of the state.) This is our favorite camping spot, and I just love the laid-back, friendly feeling of the area. It’s a narrow peninsula, so you’re always within about 10 miles of the water. And both shorelines are dotted with the sweetest small towns. Here are a few pictures I took on our last Door County trip of places that have directly influenced the setting of Hope Springs: 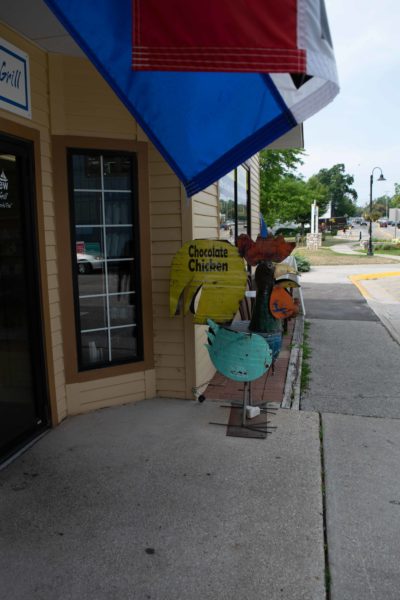 From the name, you might never guess what kind of shop the Chocolate Chicken is—it’s an ice cream shop! We stop there every time we’re in Door County, and I love the name so much that I didn’t change it for my books. You’ll find characters stopping in for ice cream in nearly every one. 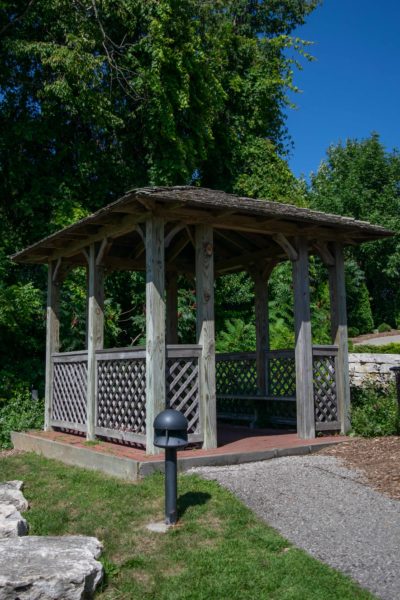 We always take our ice cream from the Chocolate Chicken outside and eat it in the gazebo that overlooks the harbor below. So do Sophie and Spencer in Not Until Forever (Hope Springs book 1). 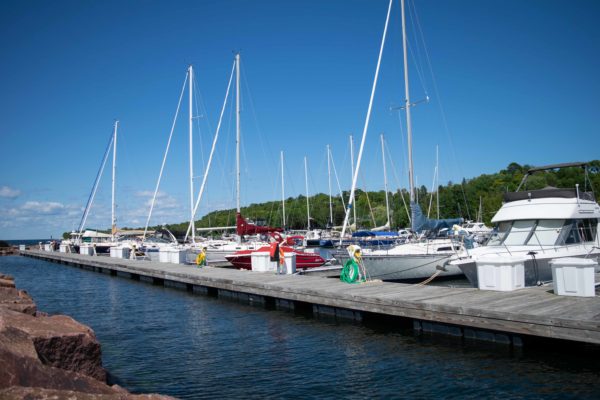 This is the view from the gazebo at the top of the hill down to the marina below. We love to walk out on the pier (holding tight to the dog’s leash so she doesn’t decide to go for a swim!). I haven’t incorporated sailing into the Hope Springs books…yet. But there is a ferry ride in Not Until Us (Hope Springs book 4). 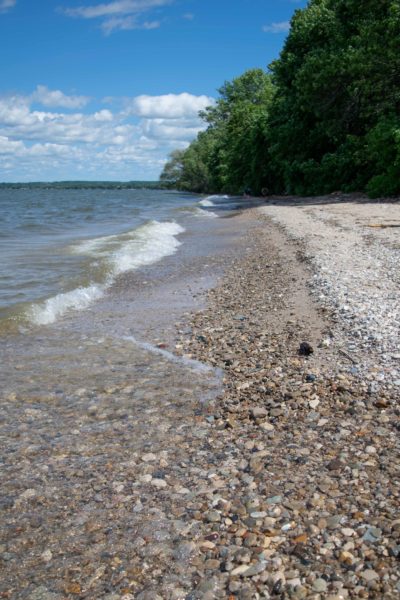 In Not Until You (Hope Springs book 3), Nate and Violet walk on a rocky beach. Here’s the inspiration! Somehow, my kids can walk on this barefoot. I cannot. 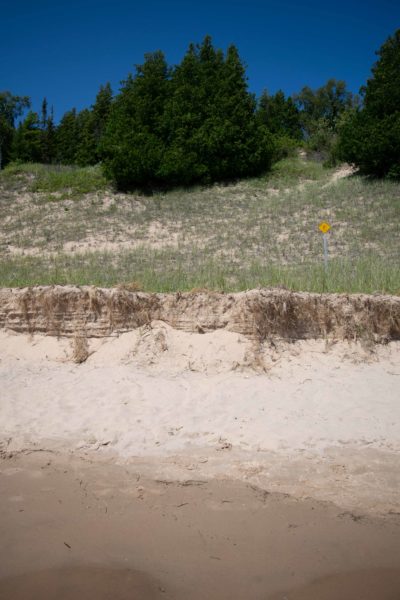 The breathtaking dunes at Whitefish Dunes State Park inspired the sand dunes along areas of the beach in Hope Springs. My family loves this park because it has hiking and swimming—including a beach where dogs are allowed to swim too.

I think the one thing I haven’t seen in Door County is a fudge shop. The inspiration for that came from Eagle River, which has not one but two fudge shops, where you can watch the workers making fudge. I think that (along with eating the fudge!) may have been one of our favorite things about living there. Of course, I just went through every single picture from the year we lived there and didn’t find a single one of the fudge shop. It’s almost as if we didn’t know that a decade later I’d be writing books inspired by the town, lol.

If you’re thinking you’d love to visit Hope Springs, I’ve just released the first three books in the Hope Springs series as a box set. You can get it for 99 cents for a limited time! 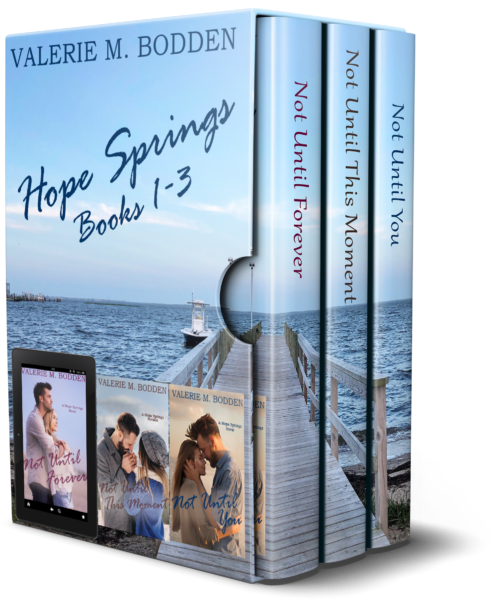 “Just discovered this Hope Springs series, and I fell in love with the town, the characters, and this author’s writing.” -Amazon reviewer

Not Until Forever: Sophie knows she did the right thing when she declined Spencer’s proposal five years ago. So why does seeing him again stir up old feelings? Spencer promised himself he wouldn’t fall for Sophie again. But there’s something different about her now. Something that makes him think maybe God is giving them a second chance…

Not Until This Moment: Peyton thought Jared was “the one”—until he told her he never intended to get married. Jared wishes he could give Peyton everything she desires. But marriage is the one thing he can never offer her. When they’re thrown together again on an annual ski trip, both have to reexamine what they want. Because it’s just possible God has other plans for them…

Not Until You: Three years after her husband’s death, Violet is sure her chance at happily ever after is over. Until Nate moves in next door and stirs feelings she thought had died with her husband. But when Nate reveals a devastating secret, they have to decide: should they walk away, or trust that the God of second chances has a plan for their future?

If you love deeply moving stories filled with faith, forgiveness, love, and the promise of forever, then the Hope Springs Books 1-3 box set will touch your heart and leave you breathless with the power of true love.

What about you—do you live in a small town or a big city? What’s your favorite thing about where you live that you’d love to see in a book?