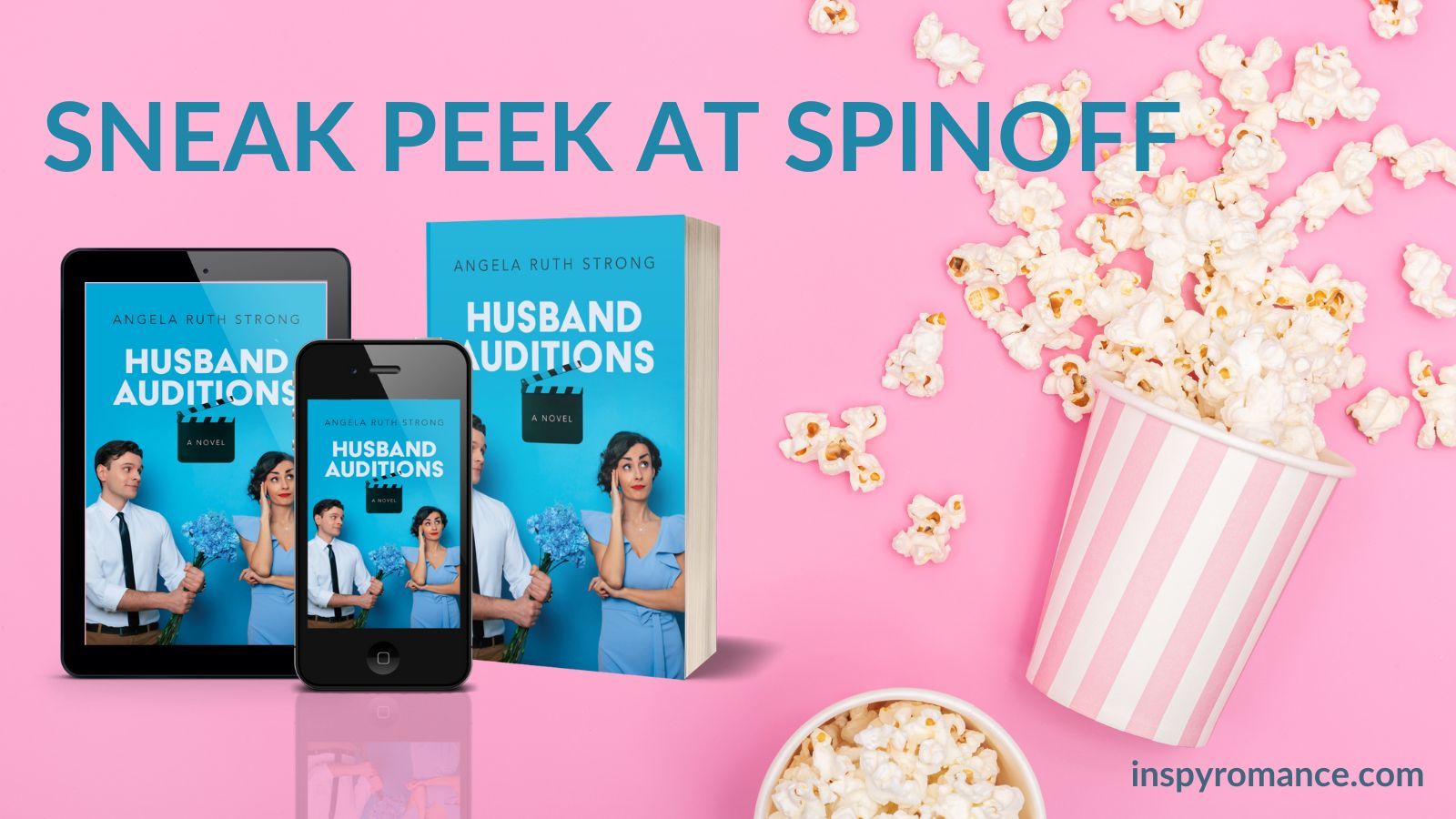 Remember that time my romantic comedy, Husband Auditions, was a finalist for the Christy Award? Crazy, huh?

Well, whether it wins or not, I’m excited about the spinoff, Hero Rehearsals. My next rom-com involves an aspiring screenplay writer who attends a citizen’s police academy as research and ends up causing trouble…especially for the policeman who’s locked up his heart.

It releases next year, and I don’t have a cover for it yet, but I do happen to have another cover for the last book. In honor of Husband Auditions‘ new look and award nomination, I give a you a peek at Gemma’s story.

***Note: The following has not been edited yet and should be read purely for fun and entertainment. All errors will soon be fixed by my editors who are much smarter than me.

I robotically press all her fingers down onto the glass at once. The slopes and swirls of the designs from her finger pads appear on the monitor in front of us. Thankfully, the computer doesn’t show any blurs or smudges, and it beeps its acceptance so we can move on.

“I’ll start with the index finger on your right hand.”

She curls the rest of her fingers in and waits for me to grip her wrist and guide her. “I’m so glad you don’t have to use ink anymore.”

I can’t help giving a snort before rolling her finger to create a print from one side of her fingernail to the other.

“What?” she asks, and with the way I’m tipped forward over her hand, her breath tickles the back of my neck. It’s warm, but somehow it makes me want to shiver.

The light underneath the glass pad flashes green, and I don’t wait for her to switch fingers. I curl and straighten them for her. Her fingers slide smoothly between mine, and I remind myself they are probably still moisturized from all the sunblock she slathered on earlier.

“If you don’t like getting your fingers dirty, you’d hate this job,” I finally answer. I chance a look up to see how she’ll respond.

She doesn’t actually flutter her lashes, but they lift slowly enough to have the same feminine effect by the time our gazes lock. “I might surprise you.”

My guts twist in a warning that I know as instinctive. I’m being lured into danger. The word “siren” comes to mind, and I wish I meant the kind attached to my patrol car.

“I don’t know.” I extend her bare ring finger and roll it along the glass. “Your skin is too soft for manual labor.”

I didn’t mean that to come out as a compliment, but by the way the pulse in her wrist throbs harder under my touch, she must have taken it that way. I’m thankful everyone else in the room is too busy joking around with Officer Harris to notice Gemma and me noticing each other. I’ve never appreciated Drew’s jokes more.

Time to get my head back in the game. I have twenty-four more people to fingerprint.

I finish and submit the prints. I could step away from her, but I need to stay near the computer. “All right, guys. I’ve put a rush on Gemma’s background check. In a moment, we’ll know if she’s robbed any banks or has a history of grand theft auto.”

Gemma’s head drops back in laughter, and I enjoy the tinkling sound almost as much as the way her silky hair slides over her shoulders. The rest of the group seems to enjoy her merriment, as well, because they smile our direction. It’s kind of nice that I’m getting the laughs instead of Harris for a change.

Another round of chuckles circles the room.

Gemma grins again, and I can’t help considering the laidback attitude that makes her seems authentic and unpretentious. Maybe I’d like it if she surprised me the way she’s suggested.

The computer chimes that her results are ready. Harris explains more about the system as I click to open her file. Her name flashes red, and the sight might as well have been a punch to the gut. My insides spasm. This was not the kind of surprise I’d been expecting. This is kryptonite hidden in a lead box.

Gemma Bennet has a warrant out for her arrest.

What have been some of your favorite spinoffs or sequels?