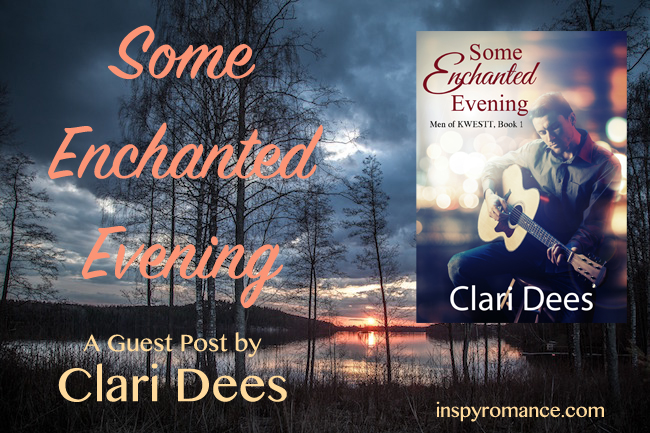 Some Enchanted Evening
A Guest Post by Clari Dees

Thank you, Inspy Romance, for having me today. I’m excited to be here!

I love music. You could even say it’s in my blood. A maternal great-grandfather led singing for his little country church all his adult life, and a paternal great-aunt played piano for old-fashioned, all-night singings in Arkansas as a young woman—once playing for Albert E. Brumley (author of “I’ll Fly Away”) as he led the congregational singing.

In addition to that history, my parents were members of a singing group before I was born. In fact, according to Mom, when she played the piano in the latter stages of her pregnancy with me, I kept time to the music so vigorously the singers in the group were frequently distracted and amused by my visible bouncing and kicking. (Apparently, not only did I love music before I was born, I also figured out how to embarrass my poor mother that early, too. Second-borns always shake things up.) Since then, I’ve traveled and sung around the U.S. and recorded several albums with my sister. So it wasn’t if I would write a story about singers and musicians, it was when.

In early 2015, I entered a gorgeous old theater to watch an immensely talented group enthrall 3000 people of all ages with their musical skills and on-stage antics for over two hours. While laughing and singing along to my favorite songs, I started wondering what went on behind the curtains. I knew a little about these particular performers from following them on social media, but my imagination started the “what-if” game. The seeds of a story were planted that night, and Some Enchanted Evening and the Men of KWESTT series is the result.

(KWESTT is the name of the group and an acronym of the first names of the men in it: Kellan, Westin, Enoch, Sawyer, Trevor, and Tyrone.)

Kellan opens the series in Some Enchanted Evening. 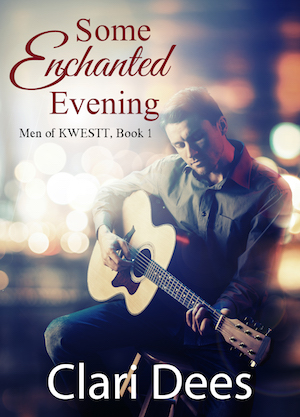 Kellan Campbell, principal singer with chart-topping musical group KWESTT, longs for roots and a family to call his own, but he’ll settle for a vacation from the fast-paced, demanding life of touring. Shedding his well-known stage persona to avoid recognition, he heads for a backwoods Missouri campground to rest and recuperate in the great outdoors. But his attempts at avoiding people are stymied by the campground’s energetic, quick-witted manager. He’d be annoyed if he wasn’t starting to look forward to her company and crazy sense of humor.

JoyAnne loves her job as manager of the flourishing family campground. After being tossed upside down and shattered, her life is finally feeling safe, predictable, and secure. And she’s determined to stay right where she’s at, doing what she does best—ensuring guests enjoy their camping experience.

The sassy, fascinating woman soon reignites Kellan’s desire for a home and family, and he tempts JoyAnne’s scarred heart to risk love again. But when mishap strikes and Kellan’s full identity is revealed as a result, JoyAnne pushes him away to protect what remains of her heart. Will she release her tightly-gripped control to God so that a future with Kellan is possible, or will the music that brought them together ultimately rip them apart? 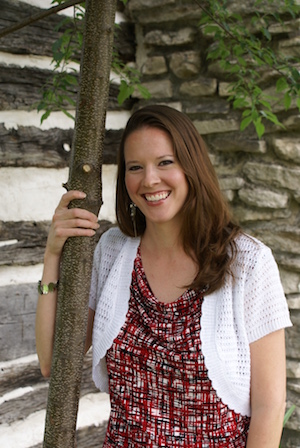 I look forward to chatting with you all, and I have two signed paperback copies and one Kindle e-book of Some Enchanted Evening to give away (U.S. only). Let me know which you prefer when you comment.

Clari Dees comes from a large preacher’s family that spent their vacations doing mission work. She has visited almost every state in the US, helped teach VBS on a Navajo reservation, assisted with free medical clinics in Mexico, laid concrete tile on a church roof in Rapid City, SD, and laid brick on a church in Kentucky. When she’s not busy saving the world as a librarian—okay, so maybe it’s only a school student with an overdue paper—or tracking down an elusive genealogy question, she can be found at her computer plotting trouble for hapless fictional characters or enjoying her family and menagerie of animals in the country. She can be found online at www.facebook.com/ClariDees.